Draw on a napkin during your next meal!

“I had read the Art Dare and was not super sure how to approach a napkin drawing, but was keeping my eyes open for an opportunity to utilize the dare.

I am a high school teacher and my weekly homeroom students won a door decorating contest and we were awarded donuts. As we were enjoying our prize, I realized that it was the perfect opportunity to draw on a napkin and I used what was on hand, a brush pen and a set of markers that one of my students had out.

I do not normally draw with markers but it was super fun to do, which is why two weeks later, when I brought my students donuts I drew another donut on a napkin. After the first drawing I had wished I had thought to draw the donut on the napkin rather than the napkin as well, so that is how I approached the second in this series. Both the napkin and the markers offered a super fun drawing opportunity and a quick finished product.” 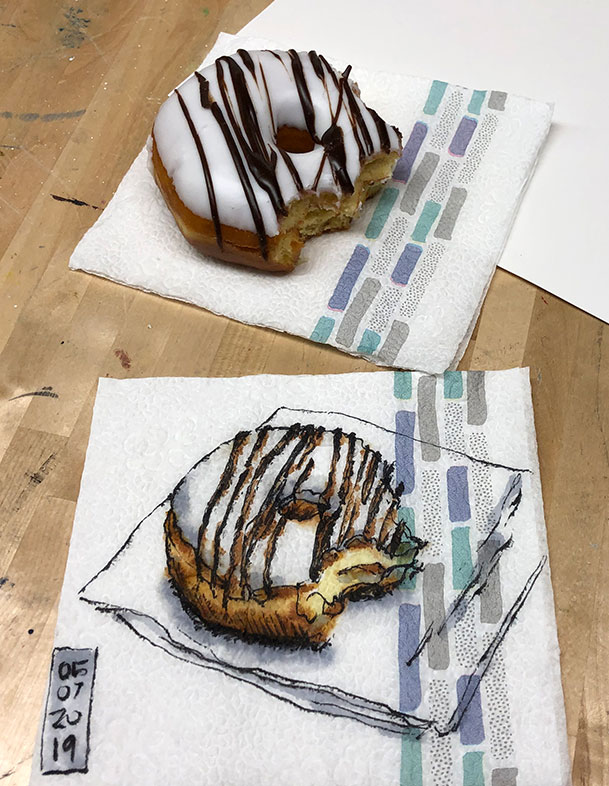 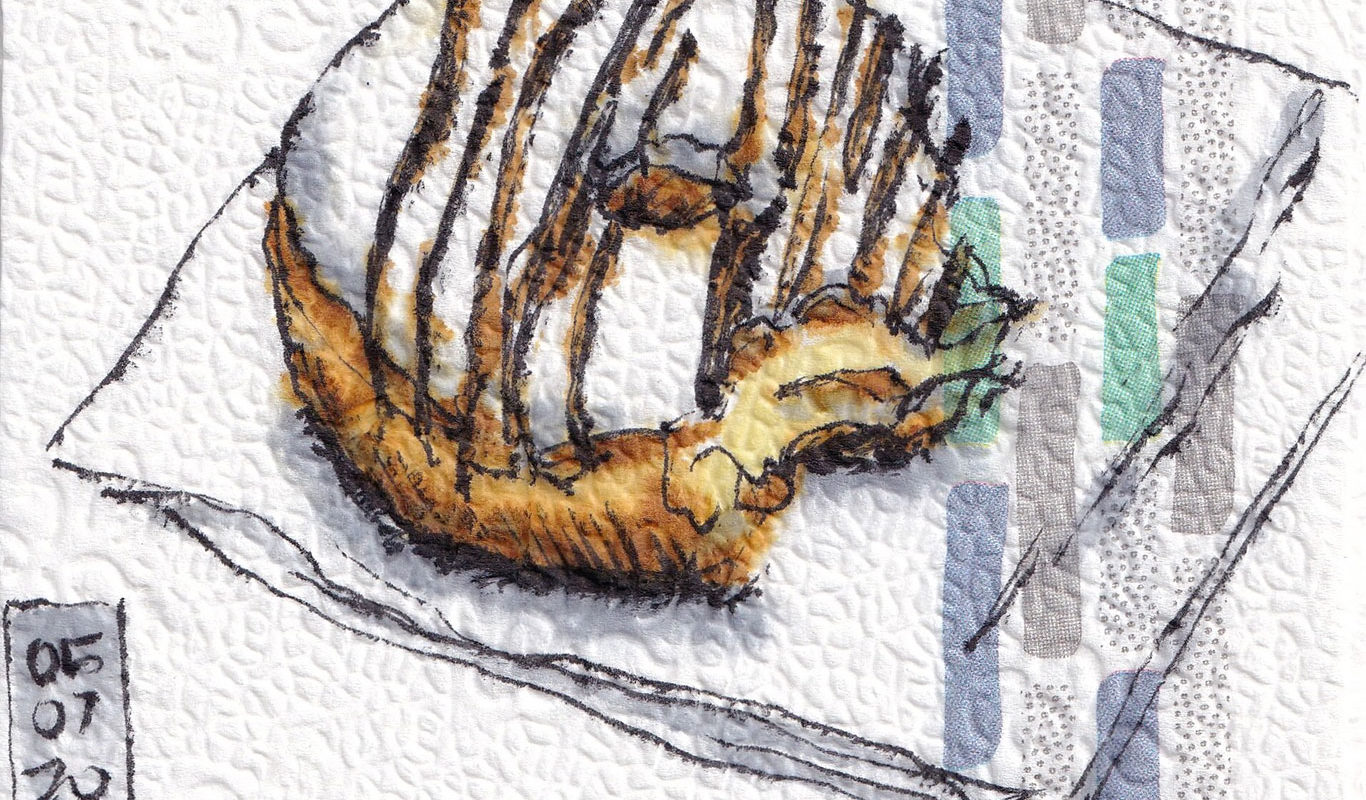 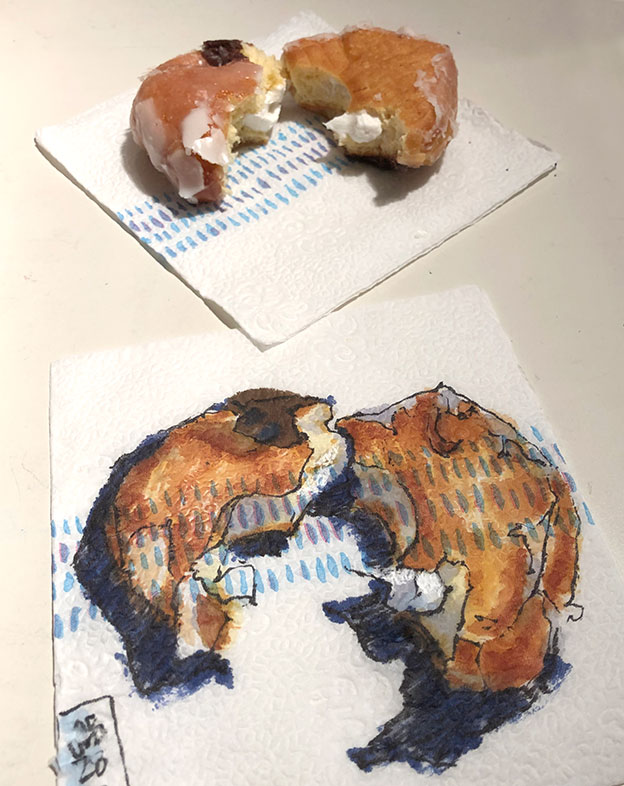 “AP exam week is an incessant cycle of testing and studying and testing and studying. But in the midst of this cycle, we can still make time for art. After taking a Calculus exam and while studying for the Statistics exam, I drew this view from a Sweet Frog using a new brush pen bought from the RISD gift shop, taking care to differentiate textures and integrate the foreground with the background.”

“For the Art Dare, I drew a portrait of my friend Joe as we were having lunch. I don’t catch up with him often and I hadn’t seen him for a long time, so I wanted to capture the moment.

It was difficult drawing from life as Joe was eating and moving but I in the end managed to catch him in between bites.”

“I love to draw people whenever I can. One of my goals is to be able to observe and illustrate people going about their lives just by watching them, waiting for a telling gesture or posture, and doing my best to capture their appearance and mood, without using a camera.

Sitting with a cup of coffee at the Boston Public Library’s Newsfeed Cafe gave me the perfect chance to watch people at work, in conversation, or staring into space. I try to pay close attention to values, so that I have a dominant value, and distinct secondary values. Before I start drawing, I look for the value structure, patterns, and connections between visual elements.”

“Napkin drawing is something which have had never tried attempting. Surprisingly, I just loved the whole new experience. It made the restaurant time more enjoyable!”

“When I heard that the May Art Dare would involve napkin drawings which was new to me, I quickly Googled ‘napkin drawings’ so I could get a grasp of the subject.

While looking through Google, I had thought to myself on how I wanted my drawing to stand out, and so I Googled ‘national monuments,’ because what stands out more than a monument with a historical and cultural impact? That’s when I went with Big Ben from the United Kingdom.”

“My primary motivation for the May Art Dare was to showcase commonplace landscapes from childhood memories. Growing up near the mountains, I am constantly in awe of my surroundings. Not only does nature entrance a person with its beauty, but it also provides creative inspiration.

Much of my artwork is entered around these concepts. While creating my piece, I tried to re-create the serene yet expansive qualities that nature encapsulates. I also hoped to incorporate unrealistic aspects, such as the disproportionately large sun. Overall, I enjoyed the opportunity to reflect upon my natural surroundings, while partaking in this creative endeavor.”

Elliot
Throughout a Galaxy
spray paint on napkin
16″ x 16″

“Throughout my life I’ve been making art. Always managing to find things to draw and creative ways to do things. The moment I saw that this art dare was a napkin art challenge, I knew I had to join.

There’s just something about making art with things everyone has, it connects you to others. It proves that you don’t need good supplies to make good art. That’s why I chose spray paint, it’s a relatively cheap medium which most people have access to, and you only really need two or three colors to make something amazing!”

“This was a napkin drawing art dare, so I was trying to express the idea of what I think the future will be soon.” 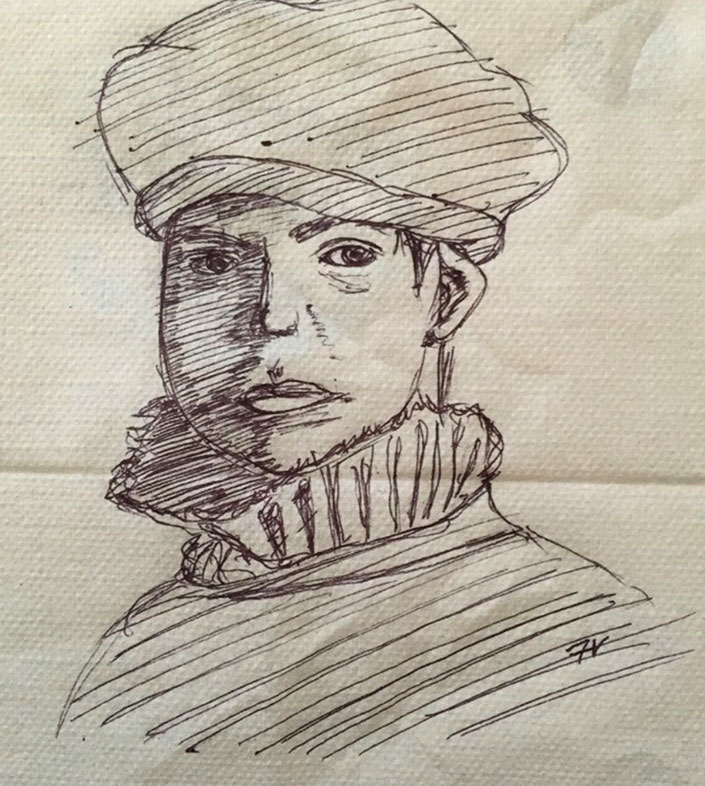 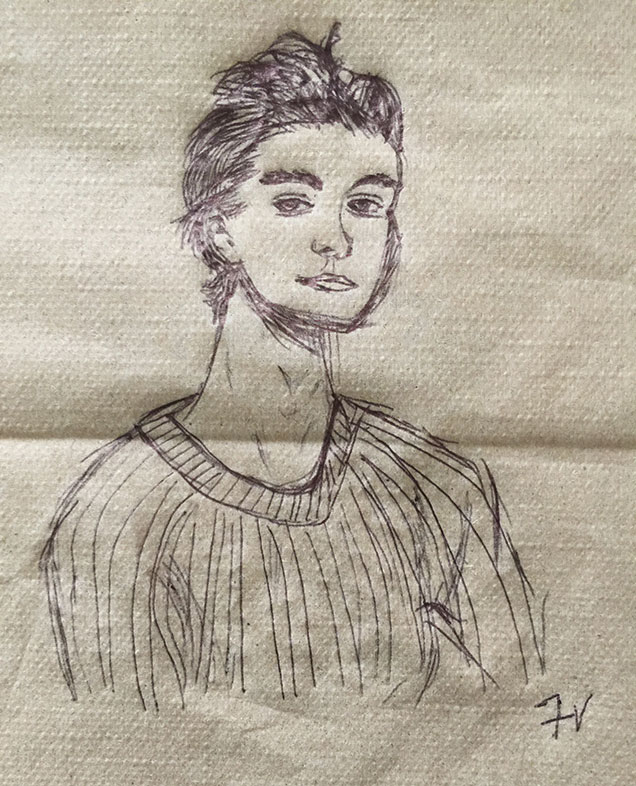 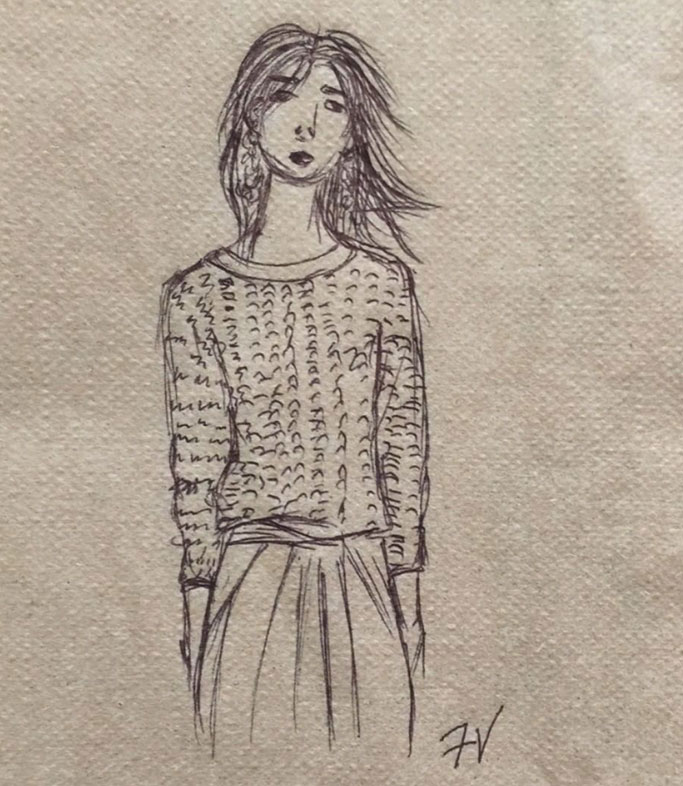 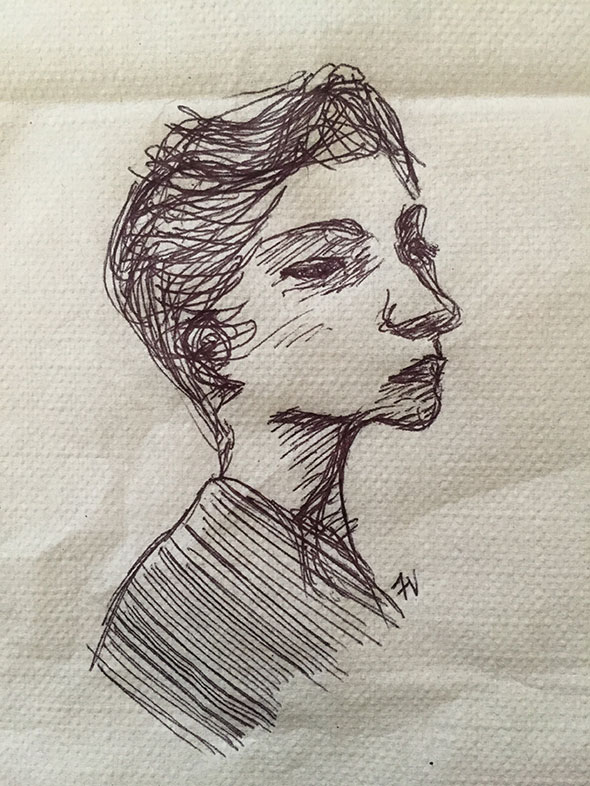 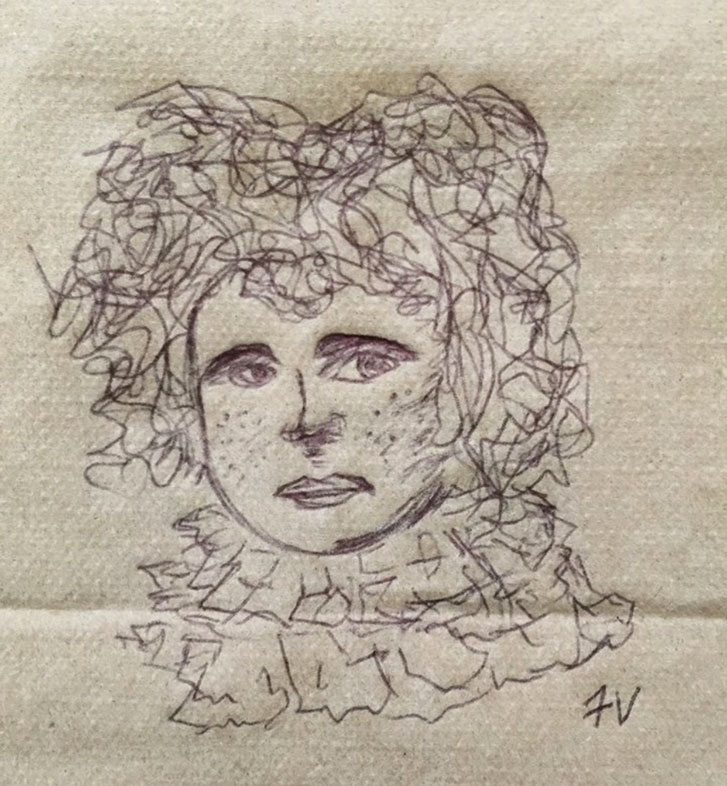 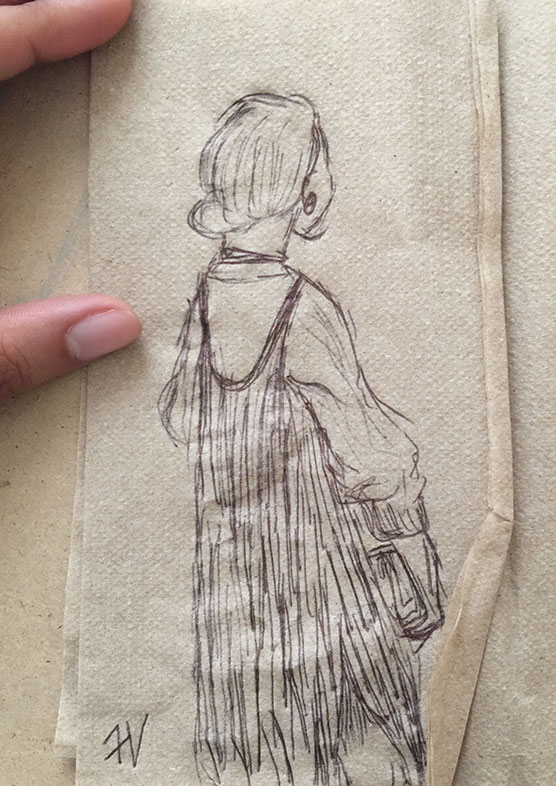 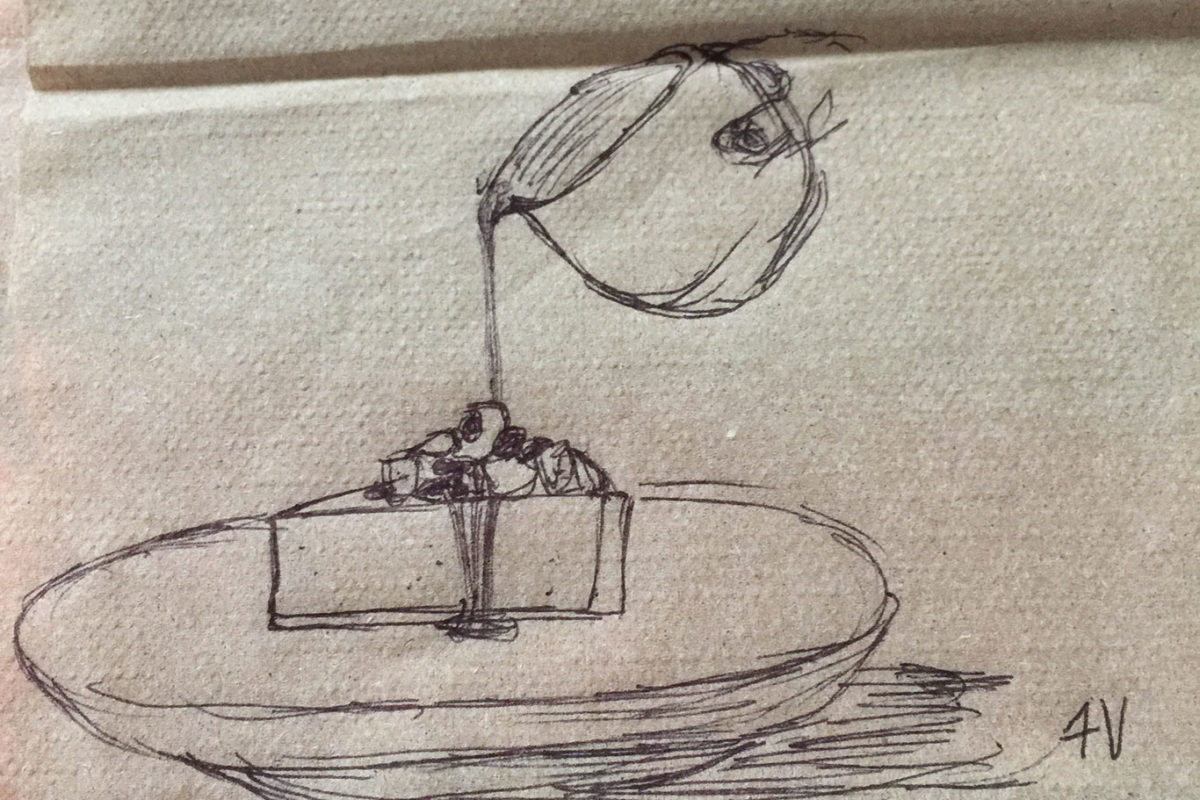 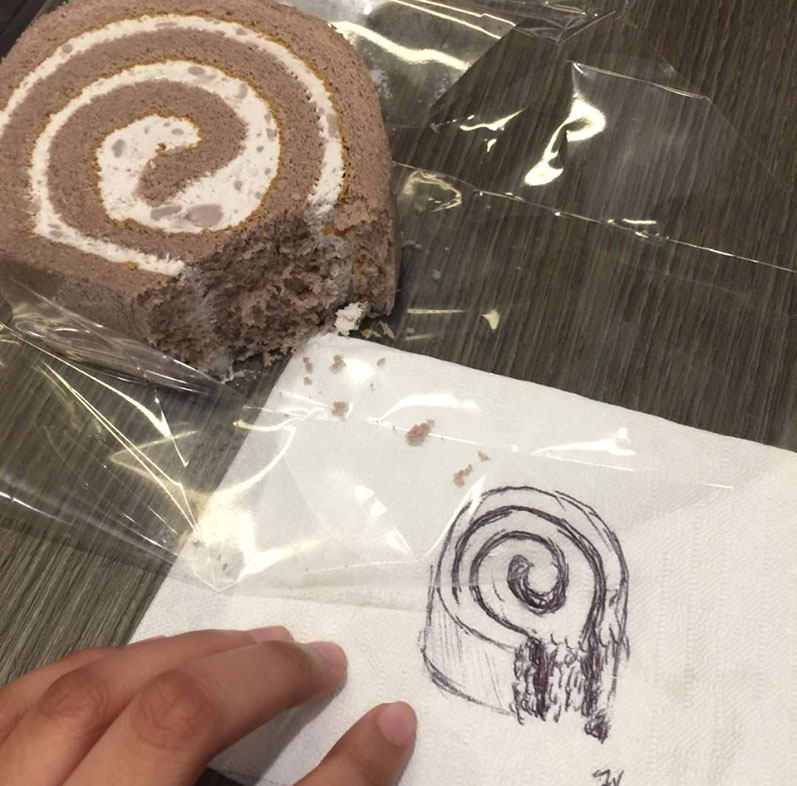 “I used this Art Dare to practice drawing people, something I’ve been wanting to get better at for a while now. I used reference photos and kept going, even when the drawings didn’t look at all like them. I did a food drawing as well, because food illustration is something that interests me.”

“I used a black pointer on a KFC tissue, since I didn’t have a napkin, while listening to The Neighbourhood and having some chai. The text are lyrics from one of the song called ‘How.’ Some of the lyrics were ‘How can you question God’s existence ? When you question God himself.’ ‘If you’re gone and I need you, but if you’re gone how is any of this real?’

A very underrated song by the way where Jesse Ruthford questions religious skepticism, which got me thinking why do have such faith, what’s the idea of God from every religion different but similar so much? Many more questions to wonder about.

Though I purposely used chai since I noticed it dissolved the black ink, which branched out into colors, some blues and reds and the yellowness left by the tea stain.Whatever I drew once was kind of multiplied, as the ink bled through on the other tissue it gave a mirroring effect.”

Art teachers & Art Clubs, assign this month’s Art Dare!
One class or club will win a class pack of art supplies from Faber-Castell.