Gesture Drawings are Not Glamorous 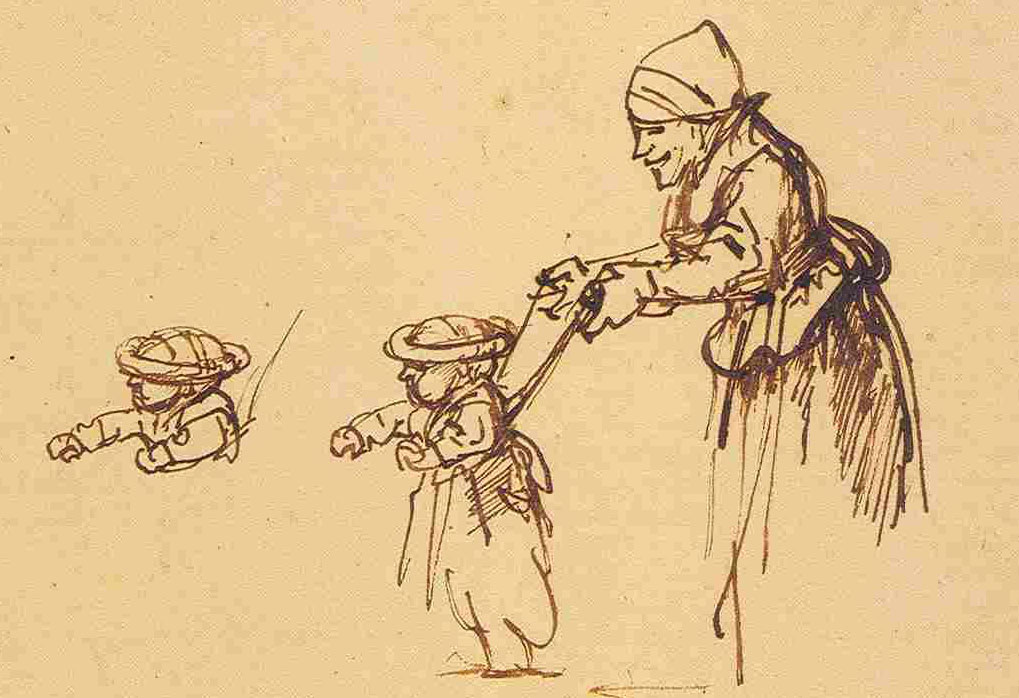 One of my friends I visited over the holiday break has a bulldog who was like a gigantic, slobbering beast from Greek mythology. He’s got a massive body, made noises like the Looney Tunes Tasmanian Devil, and made spastic movements even more awkward and hilarious to observe.  I seriously could have watched him all day.

Between the bulldog’s intense facial expressions and dramatic gestures, this bulldog was a perfect subject for gesture drawing. Surprisingly, I actually haven’t had much experience drawing animals from life, but this experience convinced me that I’ve really been missing out! 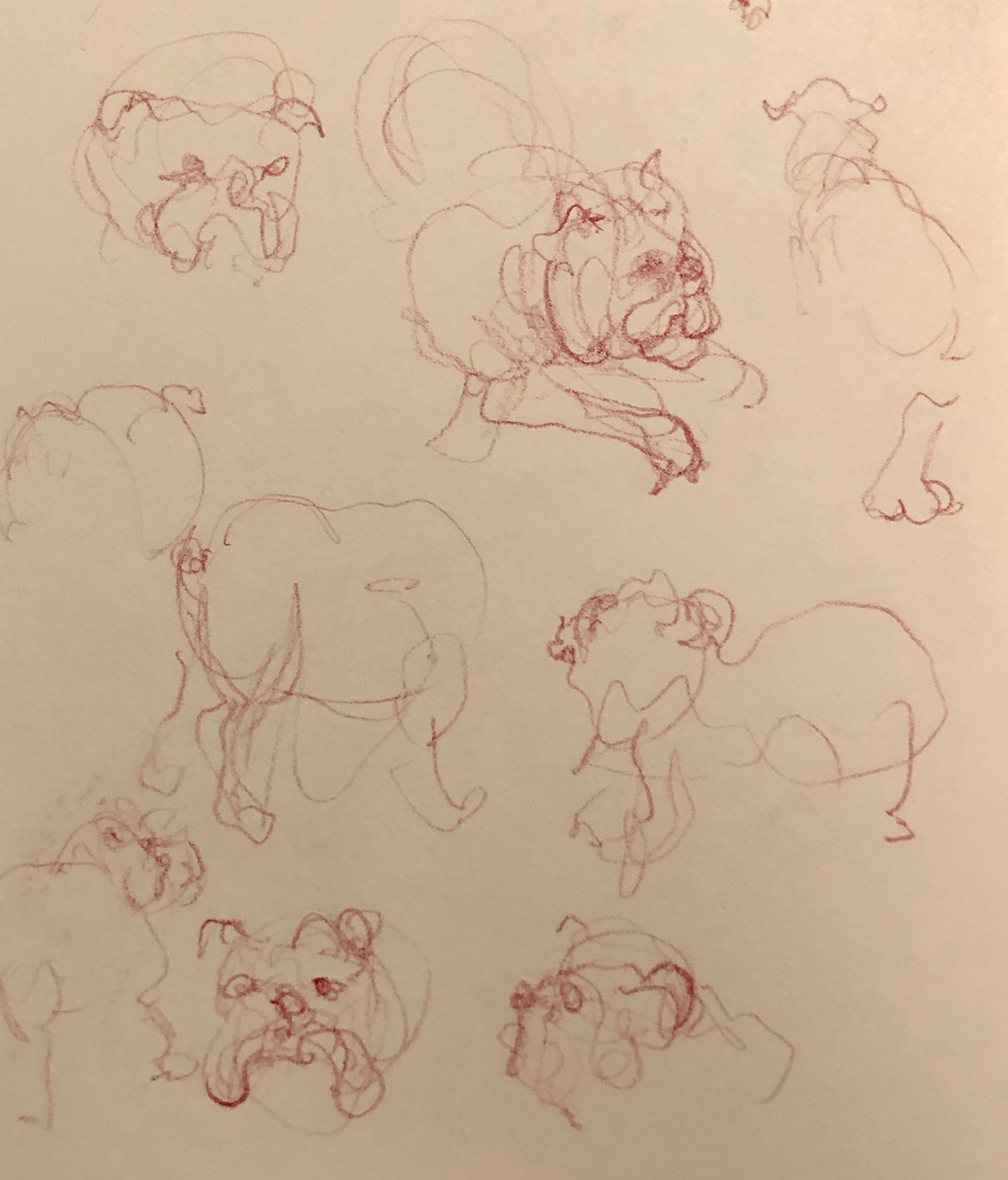 People always seem baffled that I can draw a subject that is not posing perfectly still for me.  I find that if you find people in the right context, (playing video games, watching a movie, relaxing at the beach) they barely move and drawing them is totally doable.  If they change their poses, often times if I wait just a few minutes, they’ll slide back into the previous pose so I can pick up from where I left off.

Not so with this bulldog, he literally did not sit still for even half a second. I know that at my usual pace I draw very quickly and that I’m much faster than the average artist, but with this bulldog I had to up my speed about 1000%.  For gesture drawing I usually like to draw with a very light, continuous line where my pencil stays on the surface of the paper.  I only lift my pencil from the paper occasionally, and this technique lets me get a more fluid line that is faster and more efficient than if I picked up my pencil all the time. 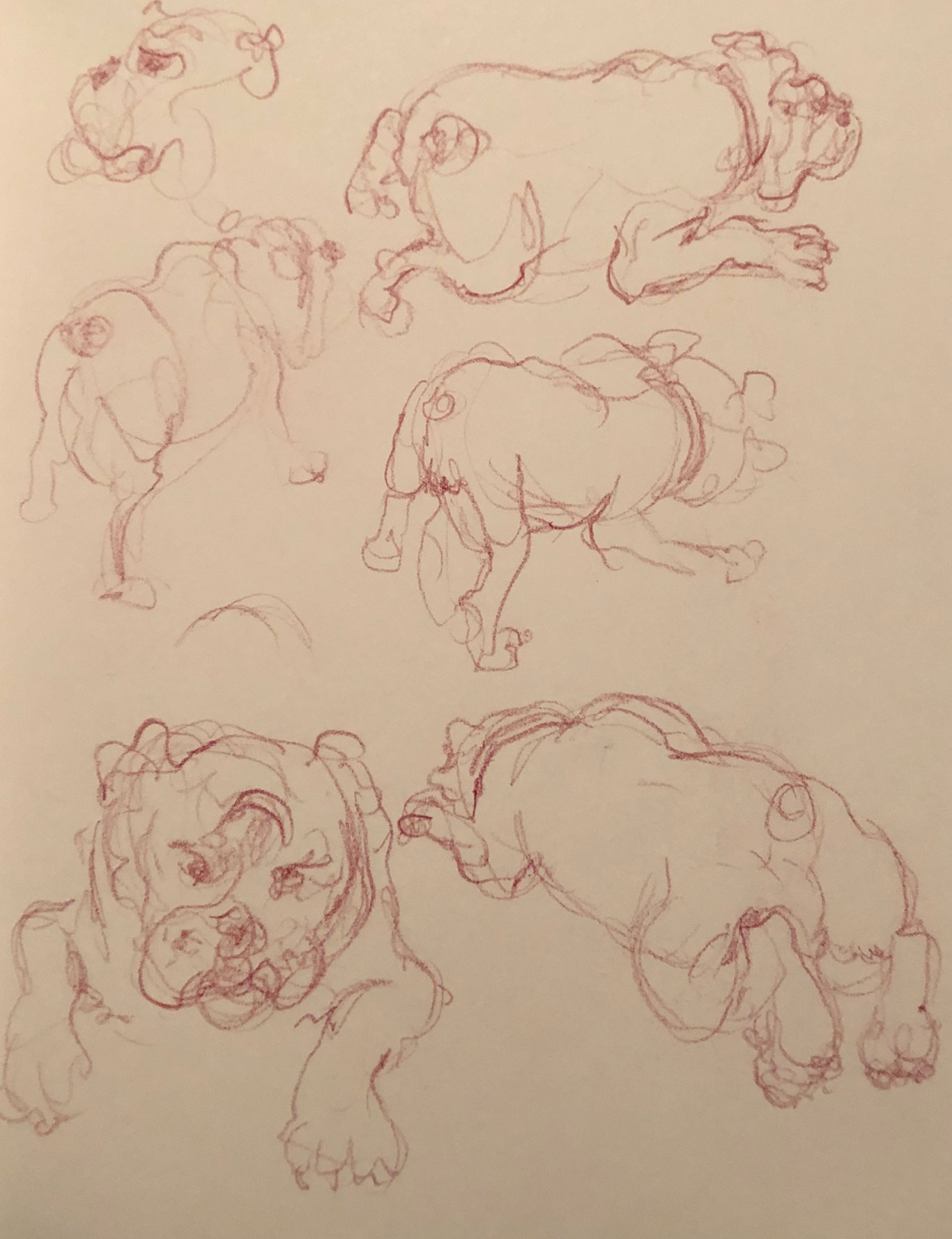 I did this same continuous line technique with the bulldog, except 10 times faster than usual, drawing at an incredibly frantic pace. I had to draw so fast that I barely glanced at my drawing, I had to focus my eyes entirely on the bulldog during the drawing process.  What was exciting is that my line work with the colored pencil got bolder and bolder, largely because the bulldog was moving so much and so fast that I totally gave up on drawing anything that would look remotely decent. Once I got past trying to get good results, that’s when the drawing process became really exciting. 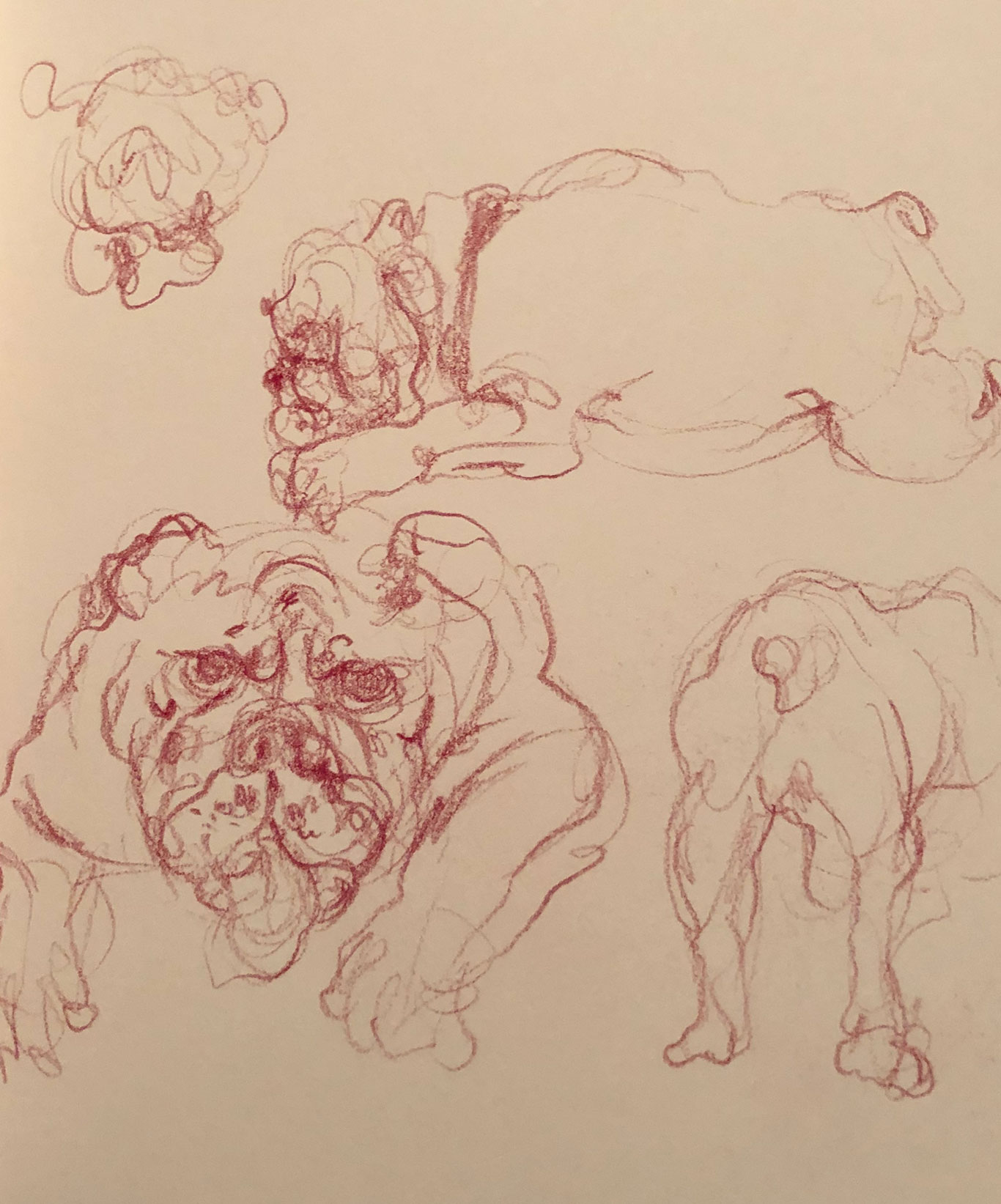 Gesture drawing to me is at the core of every drawing, a gesture drawing boils down the drawing process to its most primordial, essential state.  Sometimes though, it’s common that art students don’t want to bother learning how to do gesture drawing because it’s just not glamorous.  So often people are dazzled and blown away by refined, finished details in a drawing. By comparison, a gesture drawing can look like a bunch of uninformed, random scribbles on a page that make no sense. I’m actually the opposite: details are rarely what pull me into an artwork.  (an exception would be the French painter Jean Auguste Dominique Ingres) 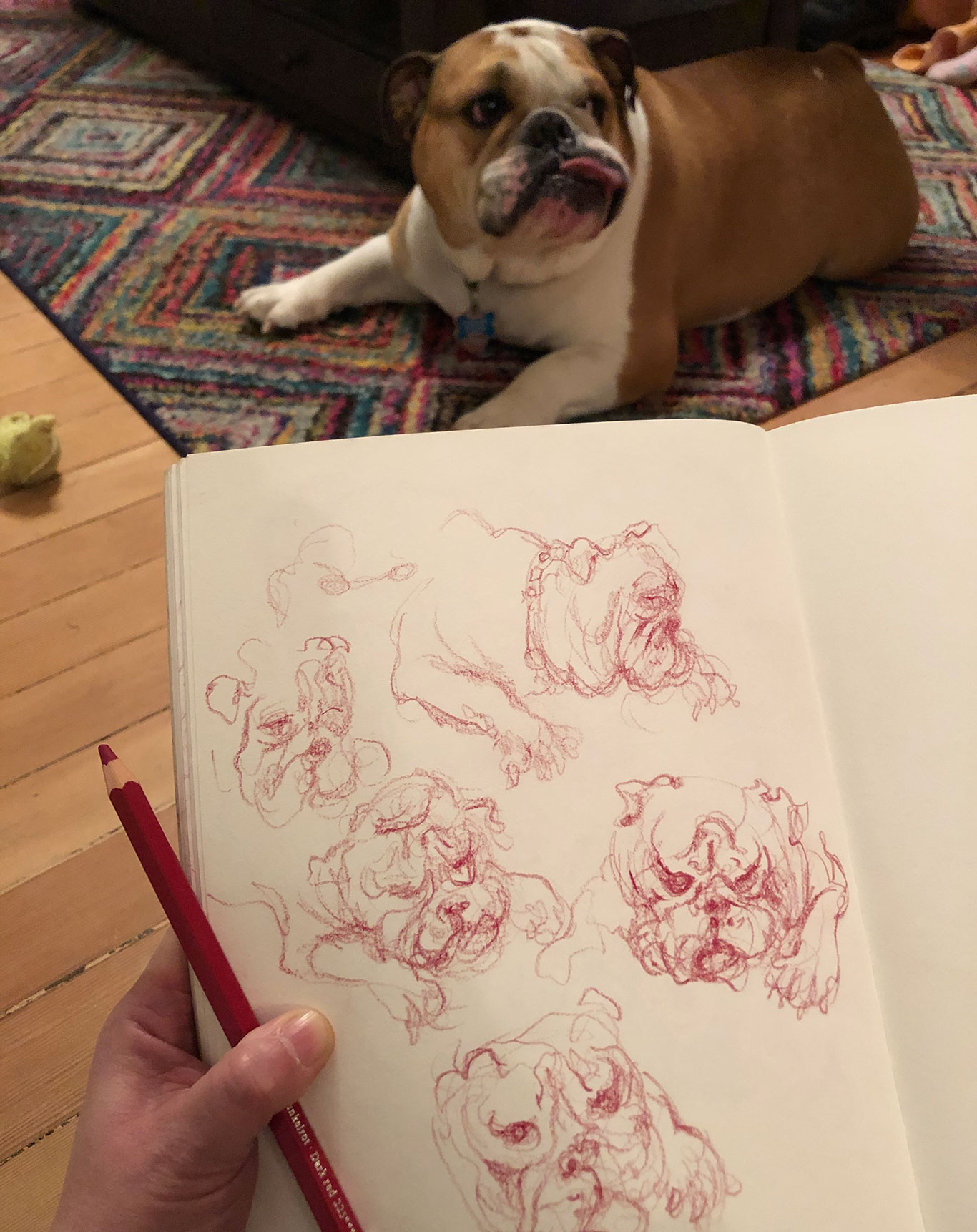 In my eyes, a bold gesture drawing that exudes artistic confidence is the most masterful act you can do as an artist who draws. A gesture drawing captures the most essential character of a subject with the fewest number of marks possible, something that no amount of detail can achieve on its own.  One of my favorite gesture drawing is this drawing below by Rembrandt, of two women teaching a child to walk.  There are no details in this Rembrandt drawing:  no eye lashes, no patterning on the clothing, no fingernails. An entire narrative is constructed with the fewest marks you can image. Now that’s true artistic mastery. 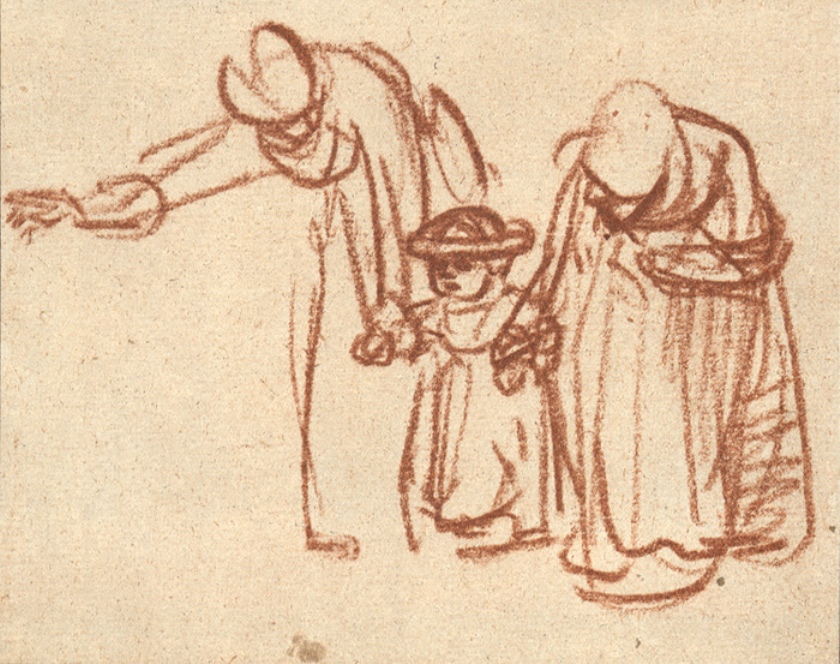 0 responses on "Gesture Drawings are Not Glamorous"