Create an artist book which visually integrates all of the clues in a New York Times Mini Crossword Puzzle without using text.

2.
Brainstorm images that visually represent each clue in the crossword puzzle.

Watch this video below starting at 01:33 min. for tips on brainstorming.

3.
Create an artist book using either the lotus fold or make up your own meandering fold.

Watch the video below to see how to do these book folds.

5.
Place tracing paper over your pencil sketch. Draw a color scheme by filling in the shapes with colored pencil.

Cut out the tracing paper so that it is the exact same shape as your artist book.

6.
Lightly sketch your layout in pencil on your artist book.

Use gouache paint to fill in the colors.

For tips on gouache, stay tuned for our upcoming gouache course. 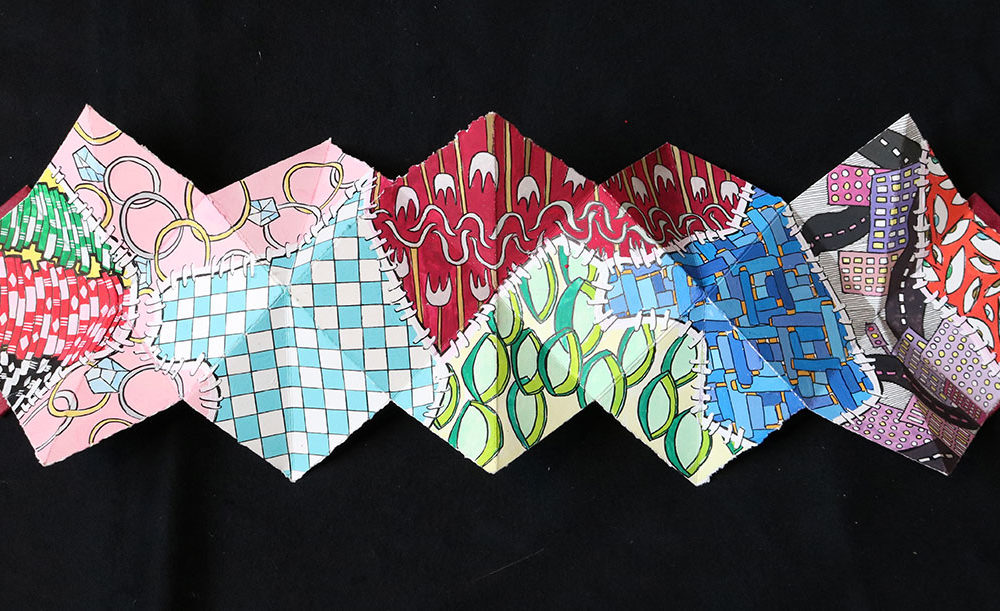 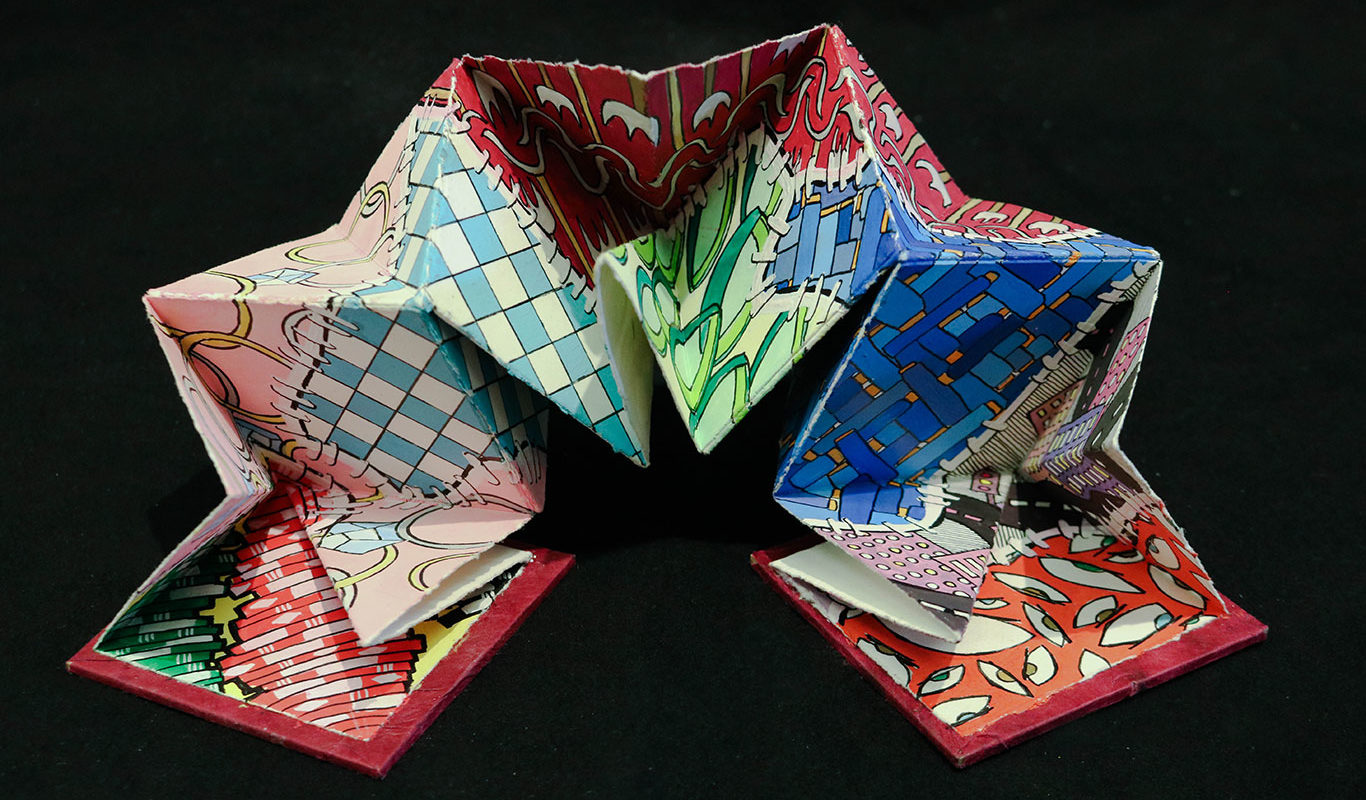 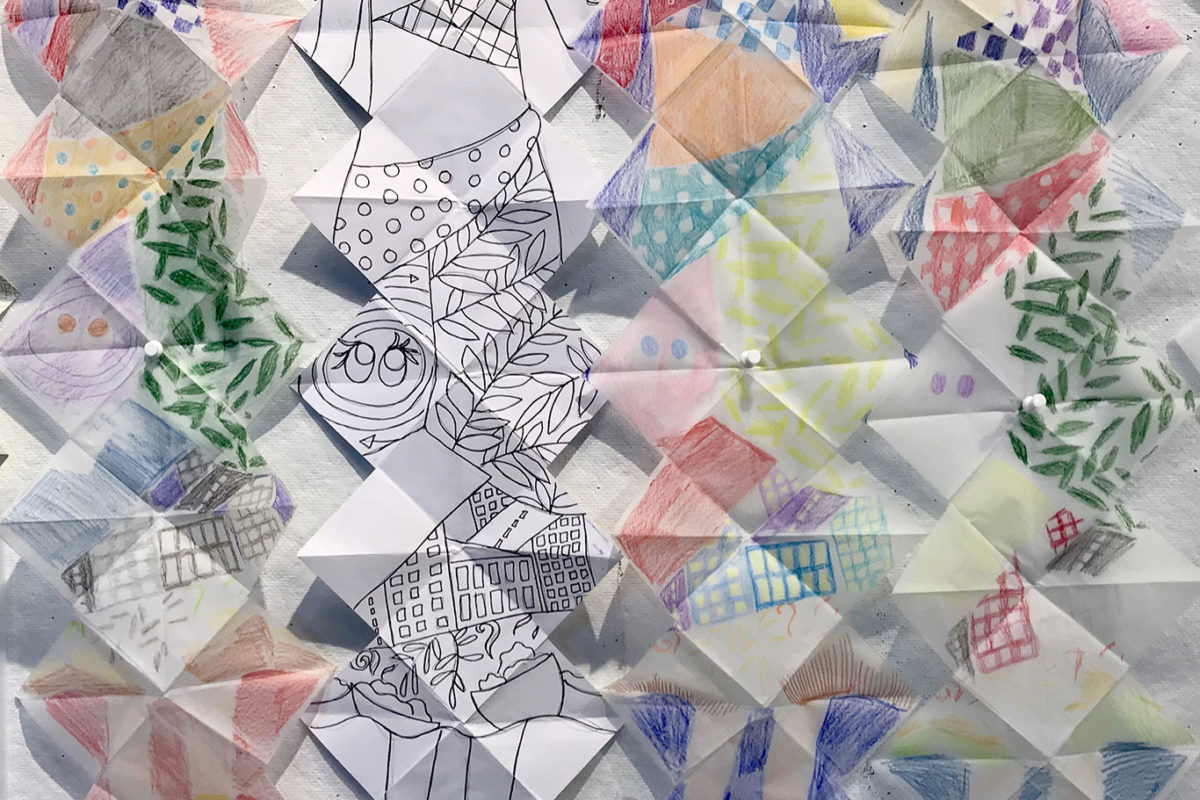 “When I first heard this project prompt,  I was overwhelmed with the broad range of ways we could interpret it. I had never taken something based off of text (like a crossword puzzle) and created a visual representation of it before. Not only had I never done this type of project before, but I had also never worked with gouache or learned book binding techniques.

Book binding was something that I had always wanted to try, and this project was the perfect situation for me to do it. I considered both the lotus fold and the meandering lotus fold, but I ultimately chose to do the lotus fold because of its simple nature. I

knew that I wanted to have one cohesive image that represented the crossword puzzle, so this style of book binding would work well. Once I learned how to assemble the book, I enjoyed the process of making the front and back covers and putting the whole thing together. In terms of the prompt itself, I approached it by first separating each word and thinking of a unique display of it, by considering what emotions, places, and ideas each word branched off to.

I decided early on that I wanted to do something with patterns, and so I started thinking about how I could show the ideas that I got from the brainstorms and make them into a design that captured its essence. Once I found a pattern for each word, I thought about how I wanted to put it all together. Being at a summer program at an art school, where creative fashion choices were the norm, I saw someone wearing a patchwork dress, and that’s the idea I decided to use to put all the patterns together.

So I made a a rough draft of my idea, with three different color schemes to help visualize the final product. I brought this to my class for critique, and I received many suggestions that would help me improve my piece. The biggest change was taking the dress out of the composition, and focusing on the patchwork/quilt aspect of it.

I also changed a few of the patterns to make them more detailed or more representative of the word. As I started the final product, I practiced using gouache. I learned the importance of color combinations in class- thinking about complementary colors and the color wheel. Gouache was the perfect medium to make my idea stand out as well as focus on relationships between colors.

I spent a long time mixing the colors and thinking about what shades to use where; I found the color schemes that I made with my rough draft very useful during this process. Overall, I am very happy with how the piece turned out. It came a very long way from my initial idea, and in many areas, stepping out of my comfort zone paid off.

I learned a lot of technical skills when it came to painting and book binding, but I also learned things that would help me with every other project that I approach, such as the importance of brainstorming and mind mapping, and the way that color can influence a piece.” 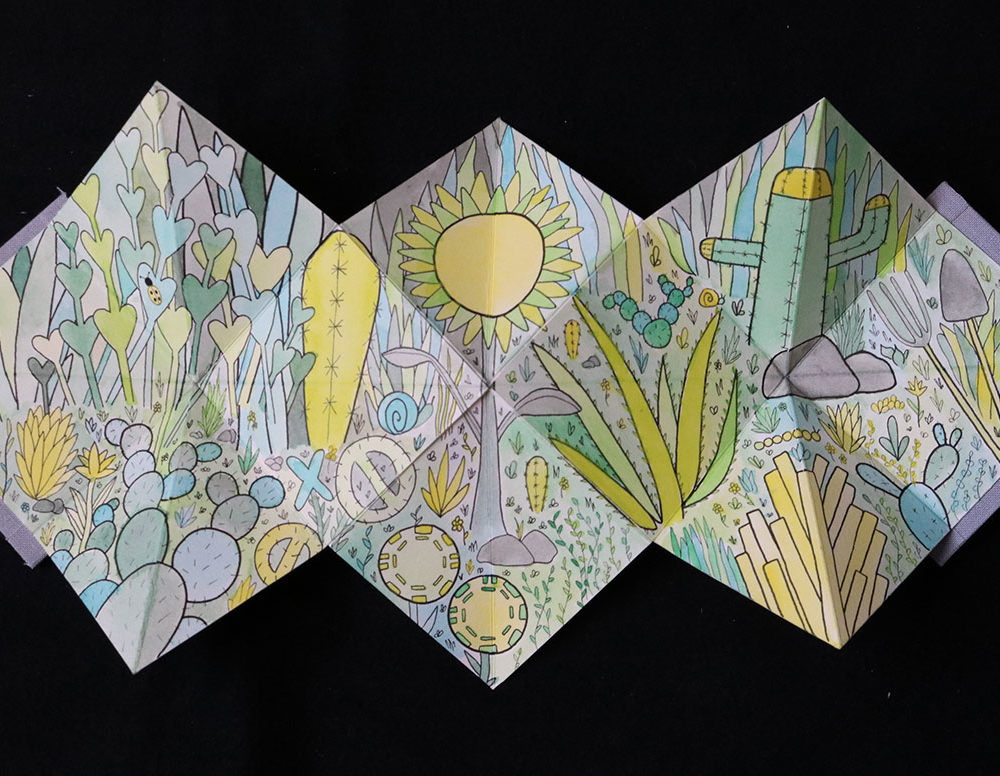 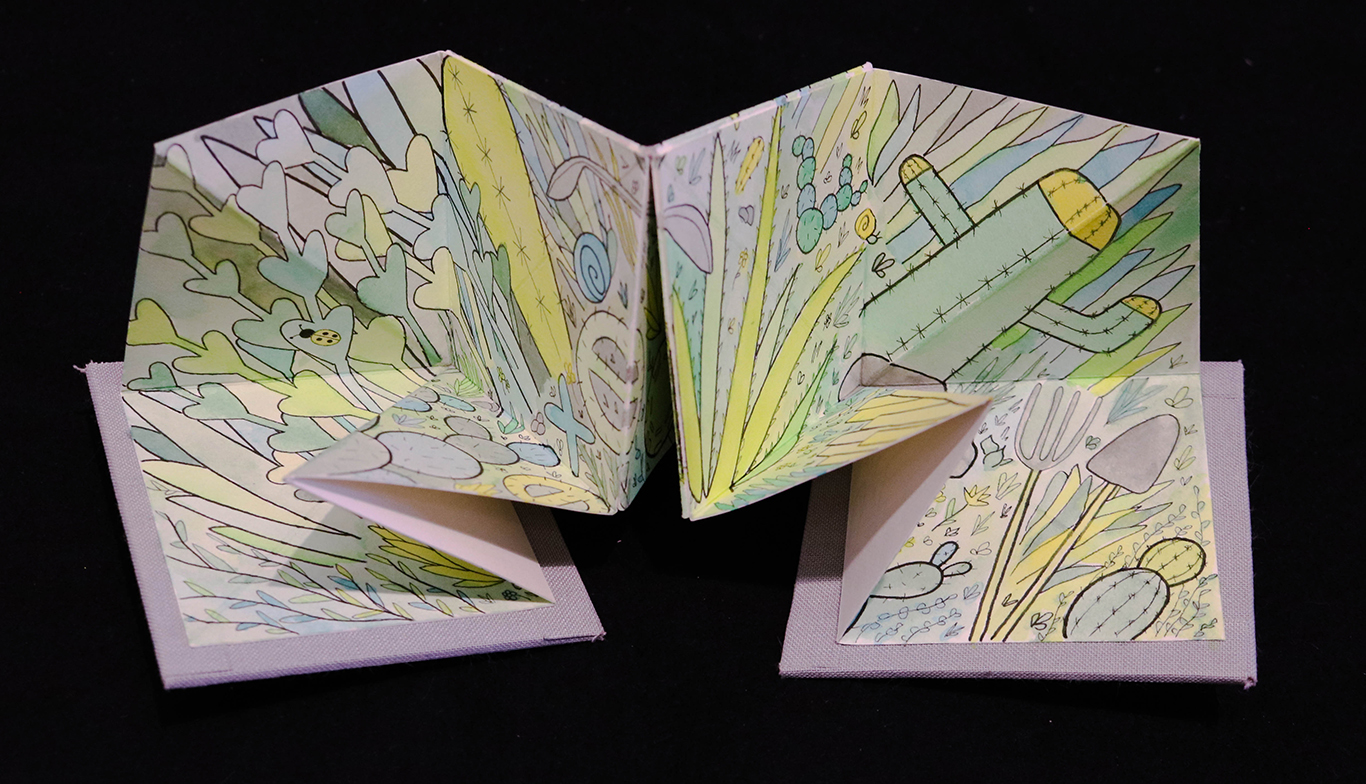 “This project taught me a lot about the design process. I began by brainstorming, we had to create a design that included words from a cross word puzzle. I thought this project was going to be extremely easy since the assignment was so broad, but it was very difficult to think of ideas.

I decided at first that I wanted to create a love story between two people. I created my sketches and I wasn’t very happy with what I made, I knew I could do better. I decided to scratch that idea and create something new, and I am glad I did.

I created a garden scene and created plants influenced by the words from the puzzle. I was much more proud of this idea and I felt like it was very creative because no one in my class did anything like it. I began by folding my paper with an intricate fold we learned in class. Then, I knew I wanted to make my project as neat as possible so I took the time to use different sizes of Micron pens to draw each individual leaf and stem on the plants.

Then I used Winsor & Newton gouache and watered it down so it would look more like water color and painted my plants. I also mixed numerous shades of green to make every part of the garden pop out in their own way. The last step was gluing on the book cover, I used a gray one to match the toned down shades of green in my piece.

I am proud of how this project turned out and of my idea. From this project I learned that the first idea that pops in your head is not always the best one and you should take a lot of time to brainstorm to find your perfect idea.” 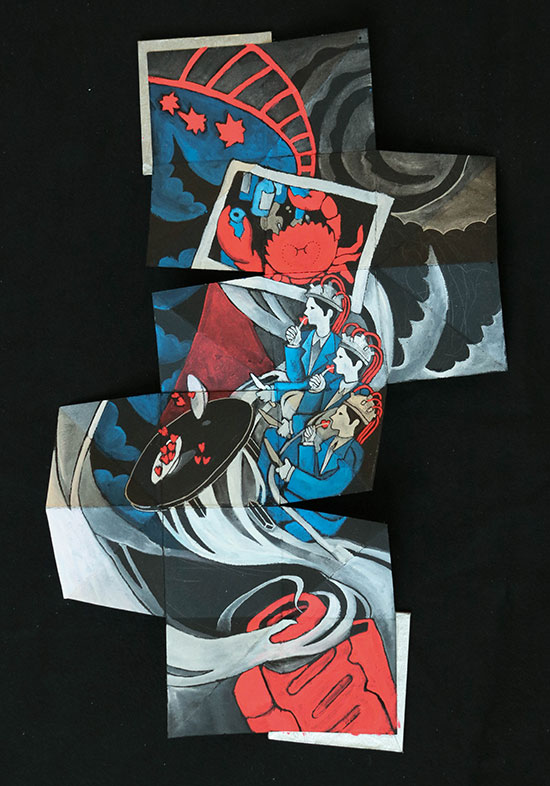 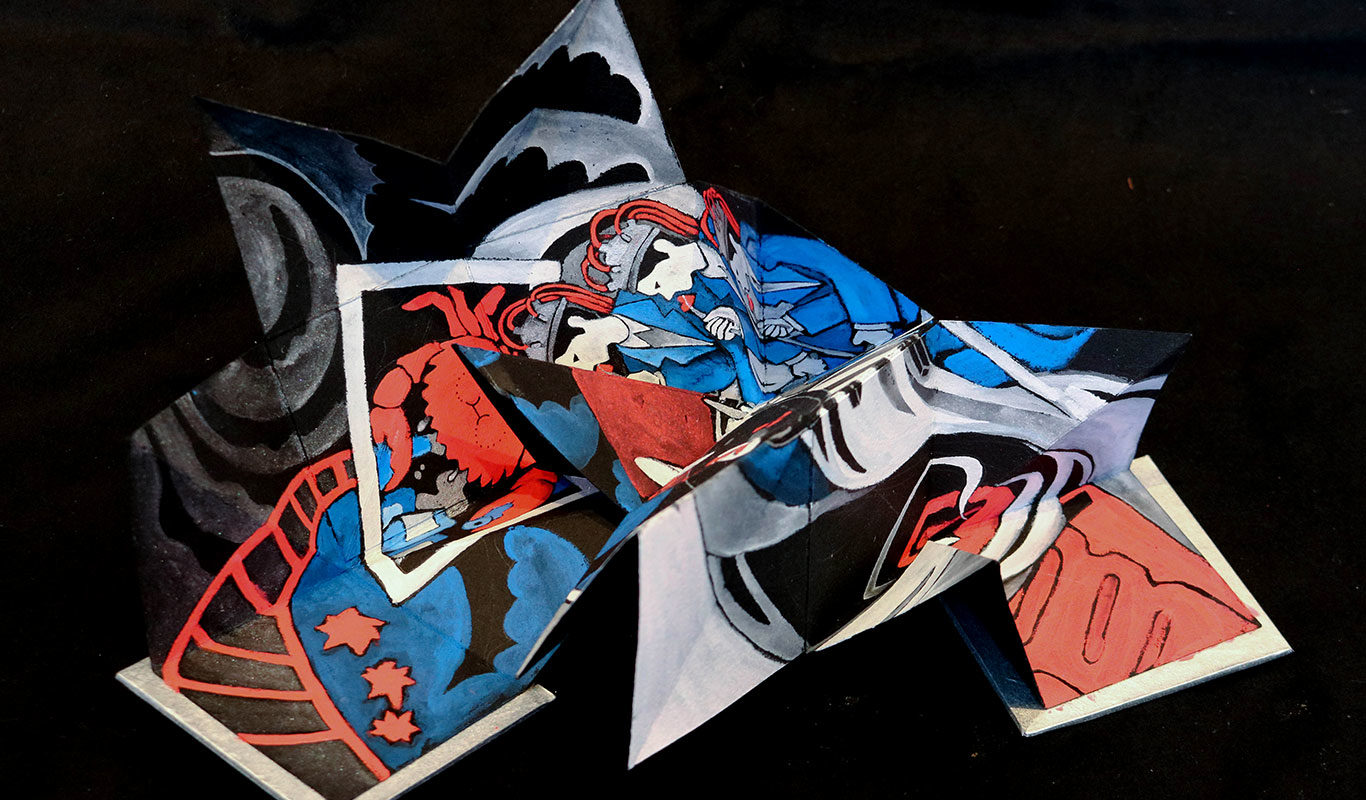 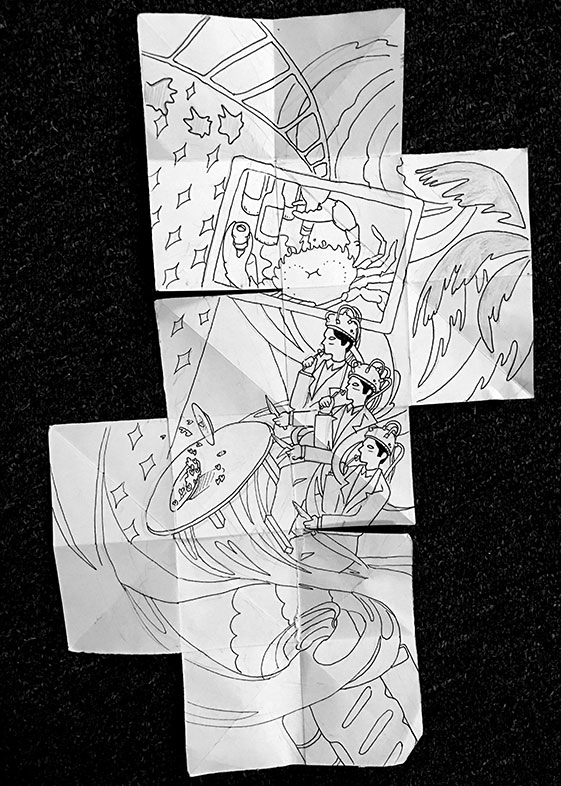 “I first started a page of brainstorming based on the words in the New York Times Mini Crossword Puzzle.  Then, I did rough sketches based on my brainstorming.

The first idea I thought about is a tornado. I wanted to use tornado as an element that can connect all the objects together. The symbols and crab on the top represented ‘San Francisco’. I used the drunk crab to represent phrases ‘Said no one ever’ and ‘All in.’

The three men sitting around the dinner table wearing brainwash helmet are ‘serf for love’ because they are feeding themselves hearts. The spotlight and dinner table represented ‘diner.’And all the flowing gas come out of a nerf gun, which is the word ‘nerf.’ The pointy patterns in the background represented ‘aloe.’

This project is pretty challenging. You need to include all of those words into one drawing and avoiding drawing the actual objects. I spend a long time making connections between the words.” 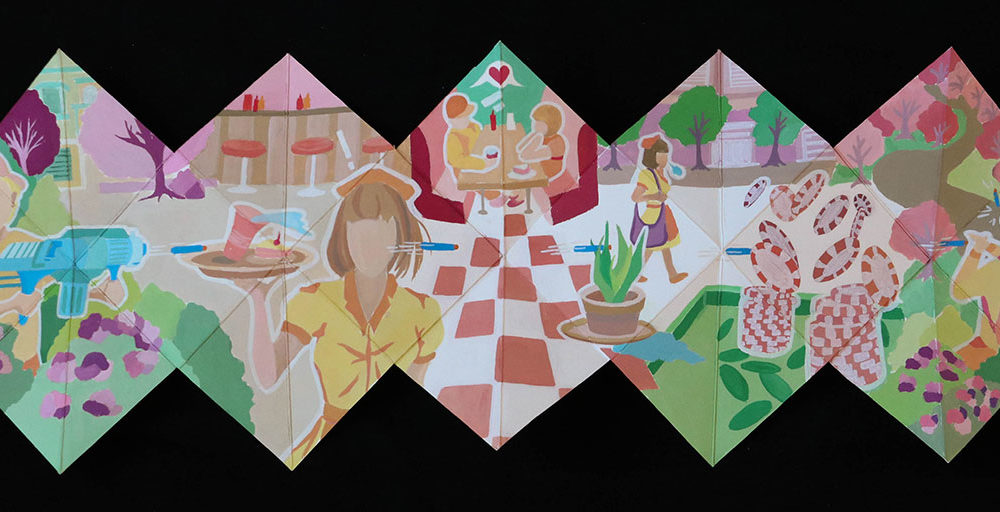 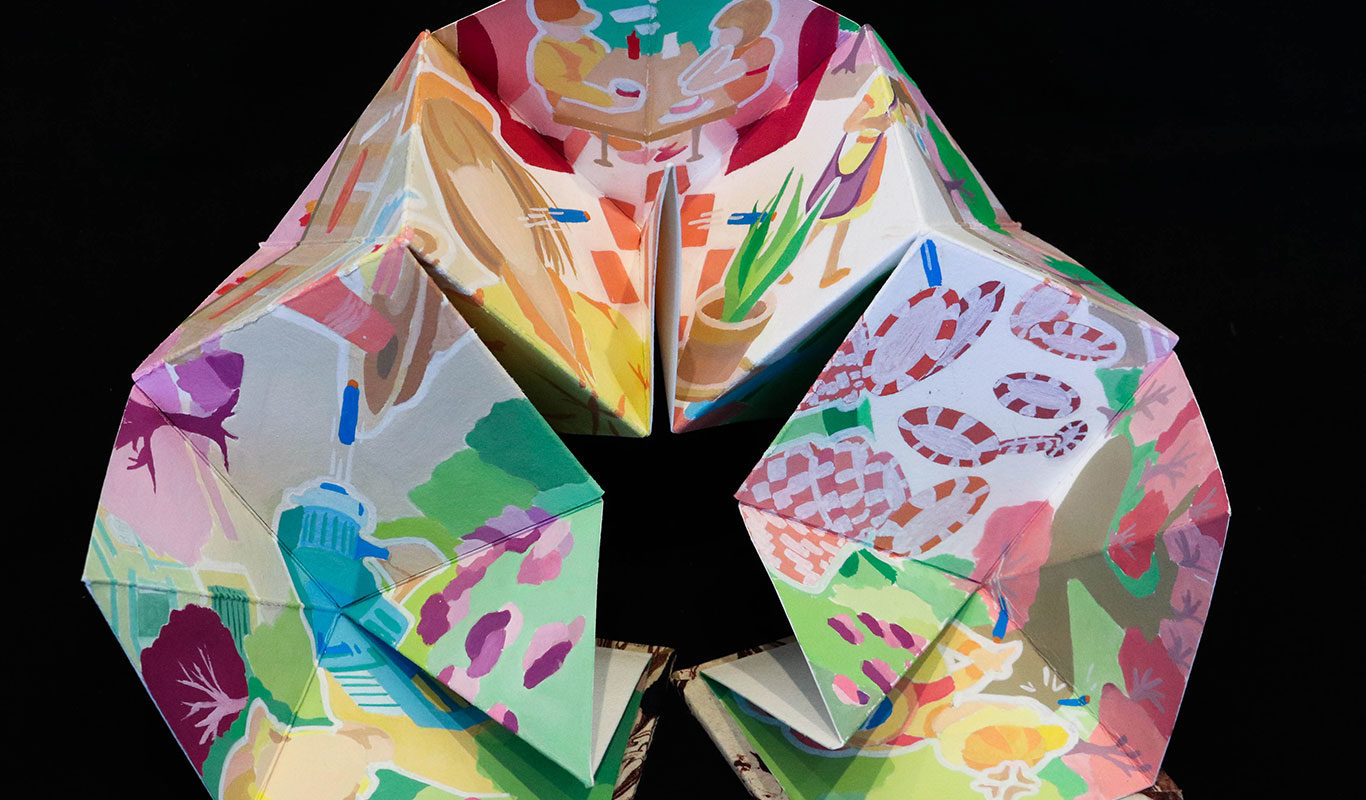 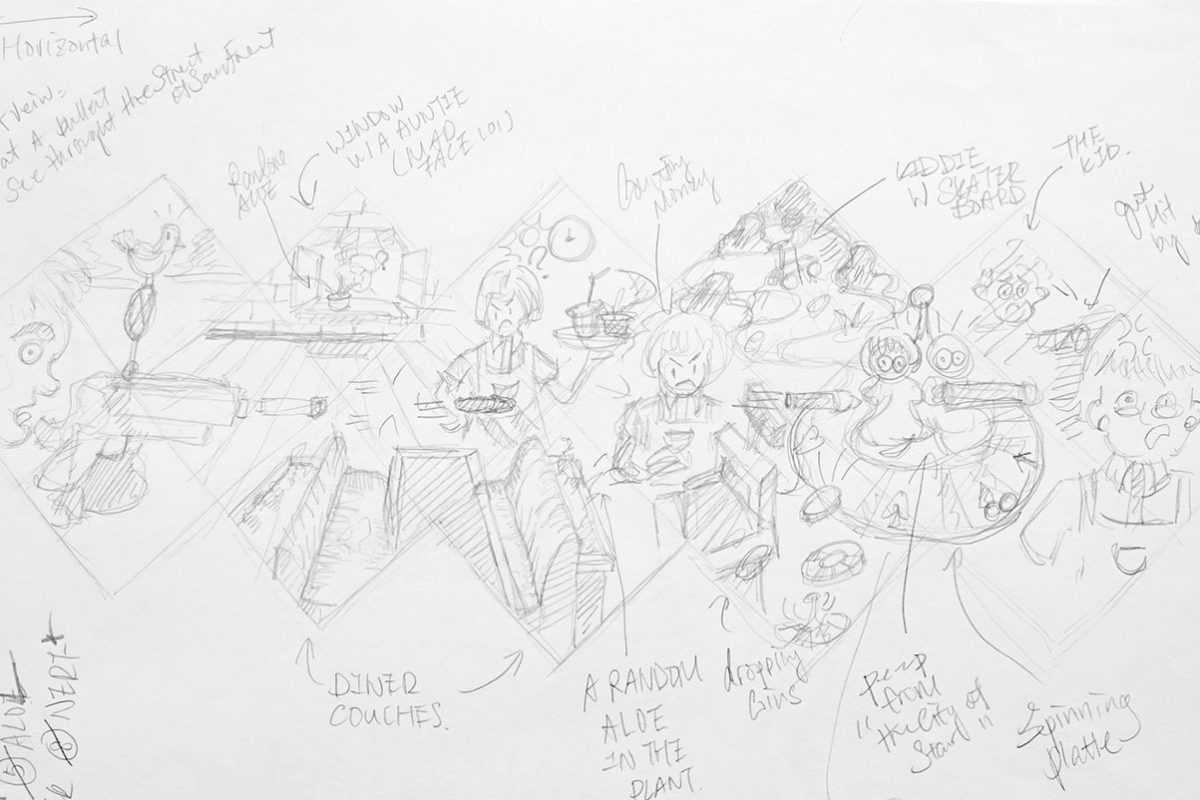 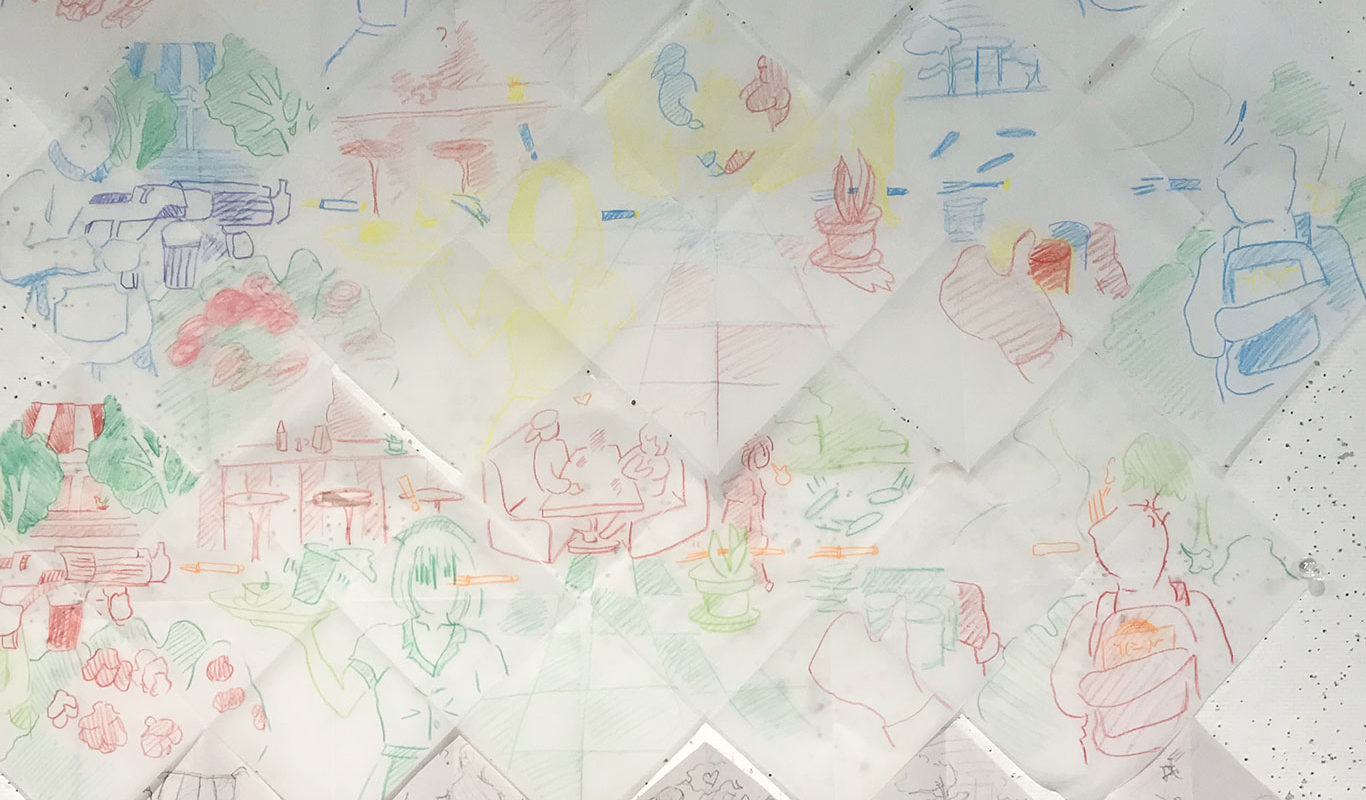 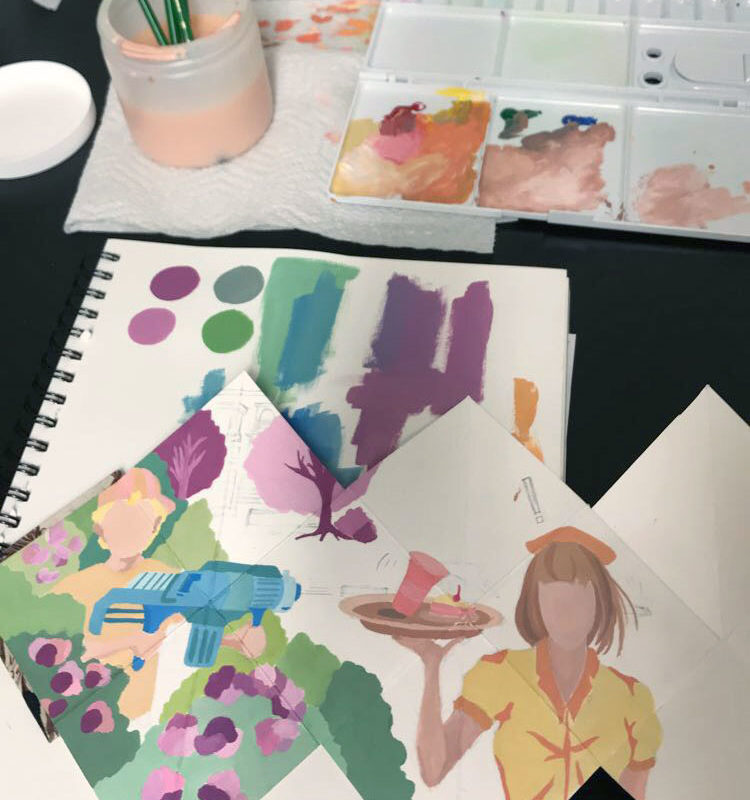 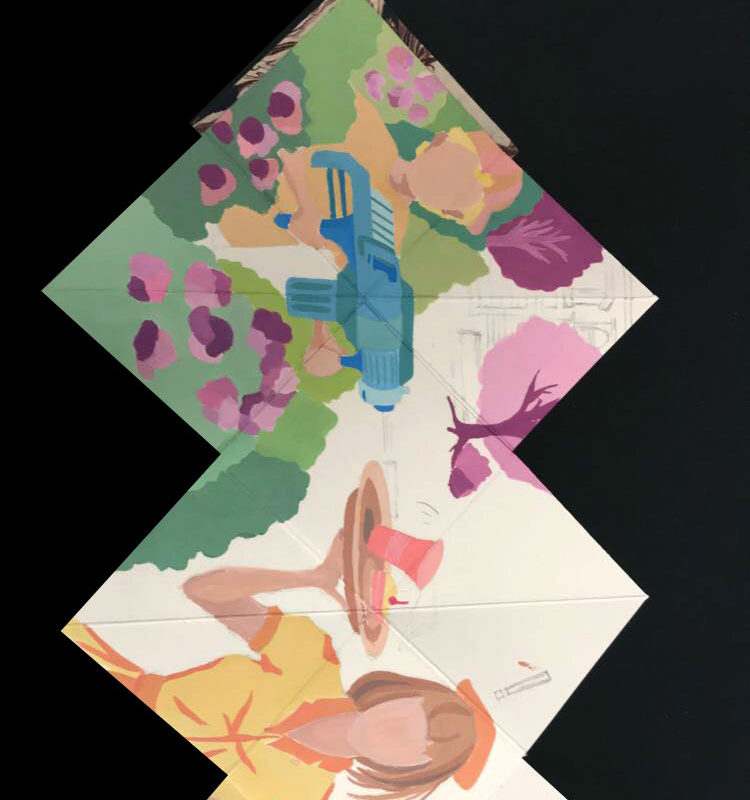 “I enjoyed every process of this project from the brainstorming to folding the lotus book. It was very entertaining to come up with one image that includes all these random words that relate to different scenery.

This project also helps me to think about how to choose subject wisely to best answer the prompt. Since the prompt from the crossword puzzle is some words that don’t quite have connections in between, I tried to find one or two clues to go across the entire image, which I chose the flying nerf bullet and the street scene of San Francisco.

After I sketched the object for a few different drafts, I started to come up with the color palette that would match the playful and delight tone of the crossword. I was happy to get to know how to use the gouache paint because how vibrant the color in the book turned out.

Coloring with gouache is a slow process, and it is not easy to cover up with layers once I made a mistake, but it trains me to mix color and think before I get started.”