Use the supply list in our Stop Motion Animation course.

In this case, we are doing the article  A New Holiday Face.

“I have officially started to dread Thanksgiving. Every year, I drive several hours to my childhood home to celebrate the holiday with my immediate family: my parents, an older brother and a younger sister. Within 30 seconds of being in the same room, we all assume our old roles.

My brother was the brain, my sister was the jock and I was the troublemaker — but I’m not anymore. Do you have any ideas for short-circuiting those same old dynamics this year? It’s really demoralizing for me.”

2.
Spend 5-10 minutes brainstorming and creating a mind map that relate to the article.

Watch this below starting at 01:33 min. on brainstorming & mind maps.

3.
Pick 5 words out of this brainstorming session that capture the idea behind the headline.

For example, if my animation is of a bird flying horizontally across a landscape, my first few frames would be of just the landscape.

5.
Create 4 more thumbnail sketches in between the first and last frame to chronologically show the narrative arc.

You should have 6 thumbnail sketches total.

If you’re feeling stuck, found objects like dry pasta, magazine clippings, and fabric, are another way you could activate the space.

7.
Set up your smartphone on a cell phone holder, and face the camera directly down towards a flat surface.

Watch this video below starting at 02:45 min. to see how to use this app.

Place an 8″ x 11” piece of construction paper on a table to be your background and tape it down.

10.
Place your visual components on top of the construction paper so that they are in the position of their first frame and visible on the smartphone/tablet.

If you have elements that do not move throughout the entire animation, tape those down to the construction paper.

11.
To begin, take 12 photos of just the first frame, with no movement.

12.
Begin to move your pieces according to your thumbnail sketches, remembering to take a photo with every movement.

The smaller the movements, the smoother your animation will be. For tips on movement, watch the video below starting at 08:08 min.

13.
Continue step 12 until you finish animating and all your animated pieces are back to their original position.

14.
Play around with speed and see what Frames Per Second (FPS) works best for your animation. Generally, 12 FPS works well.

15.
Export your animation as an Animated GIF. 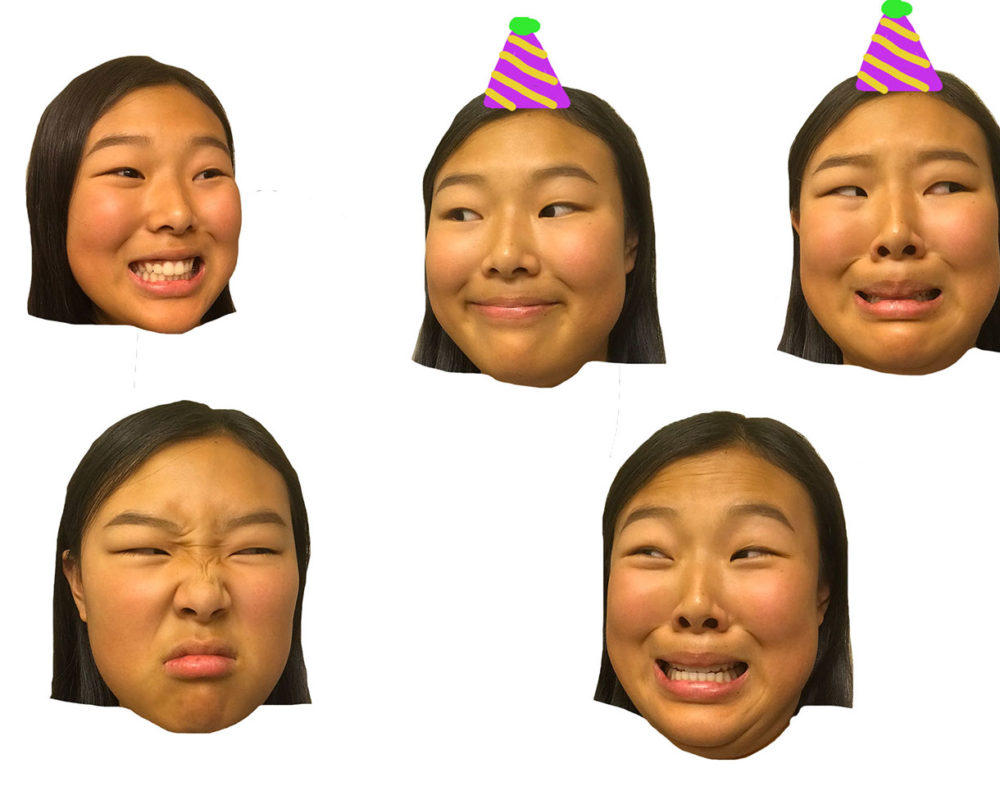 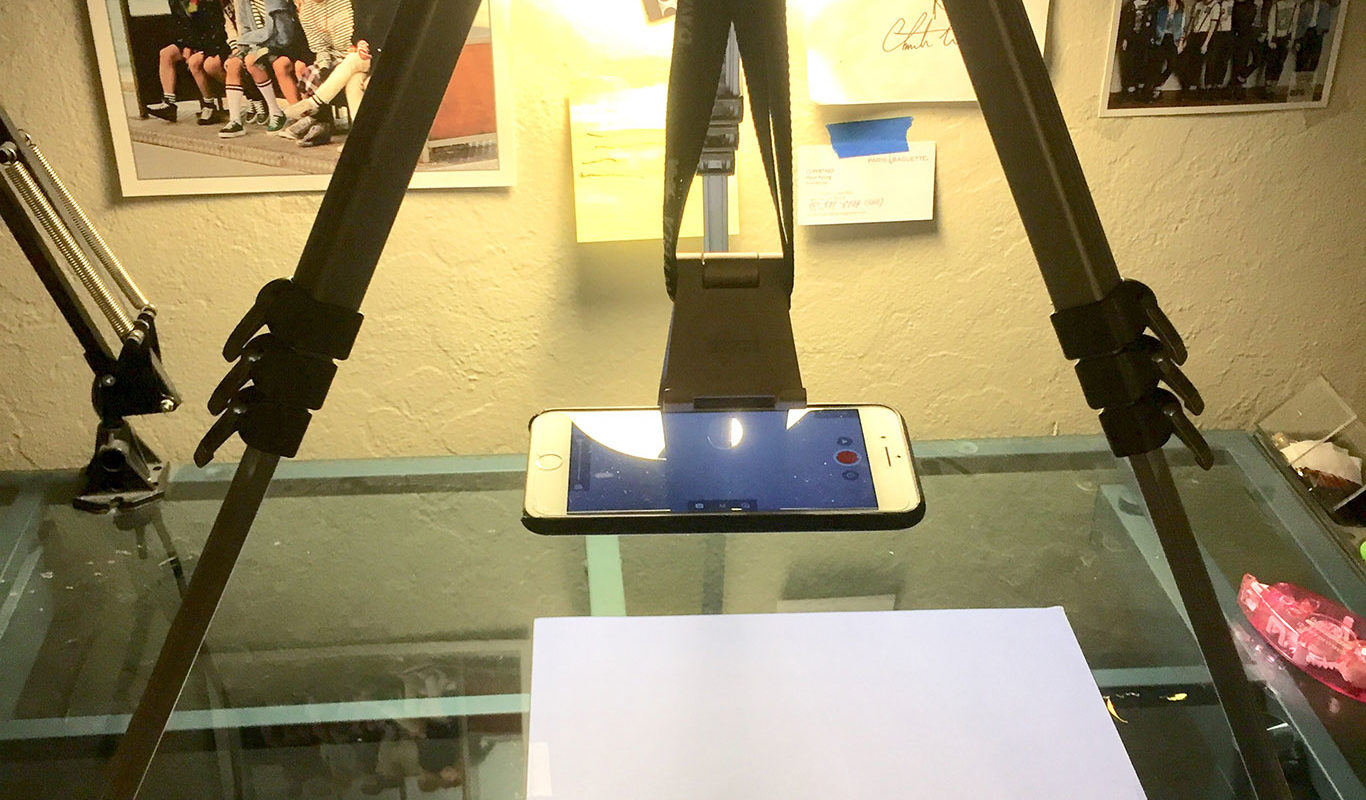 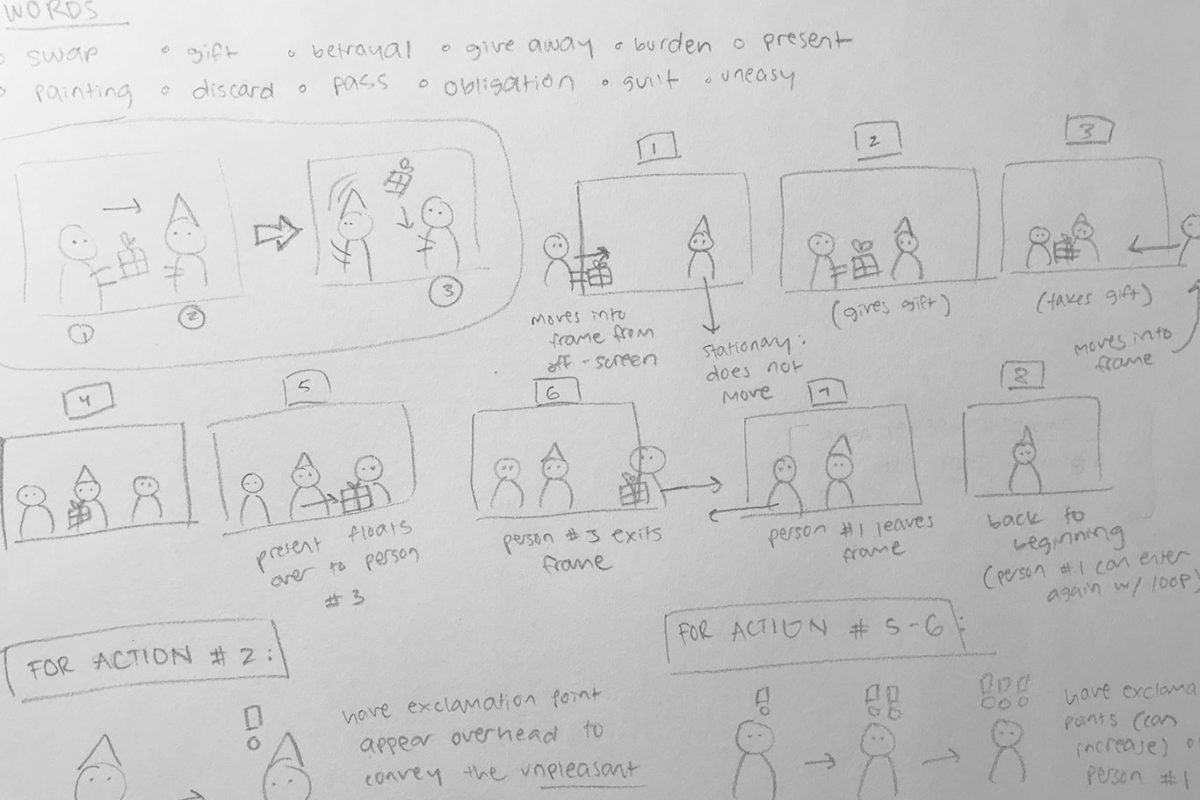 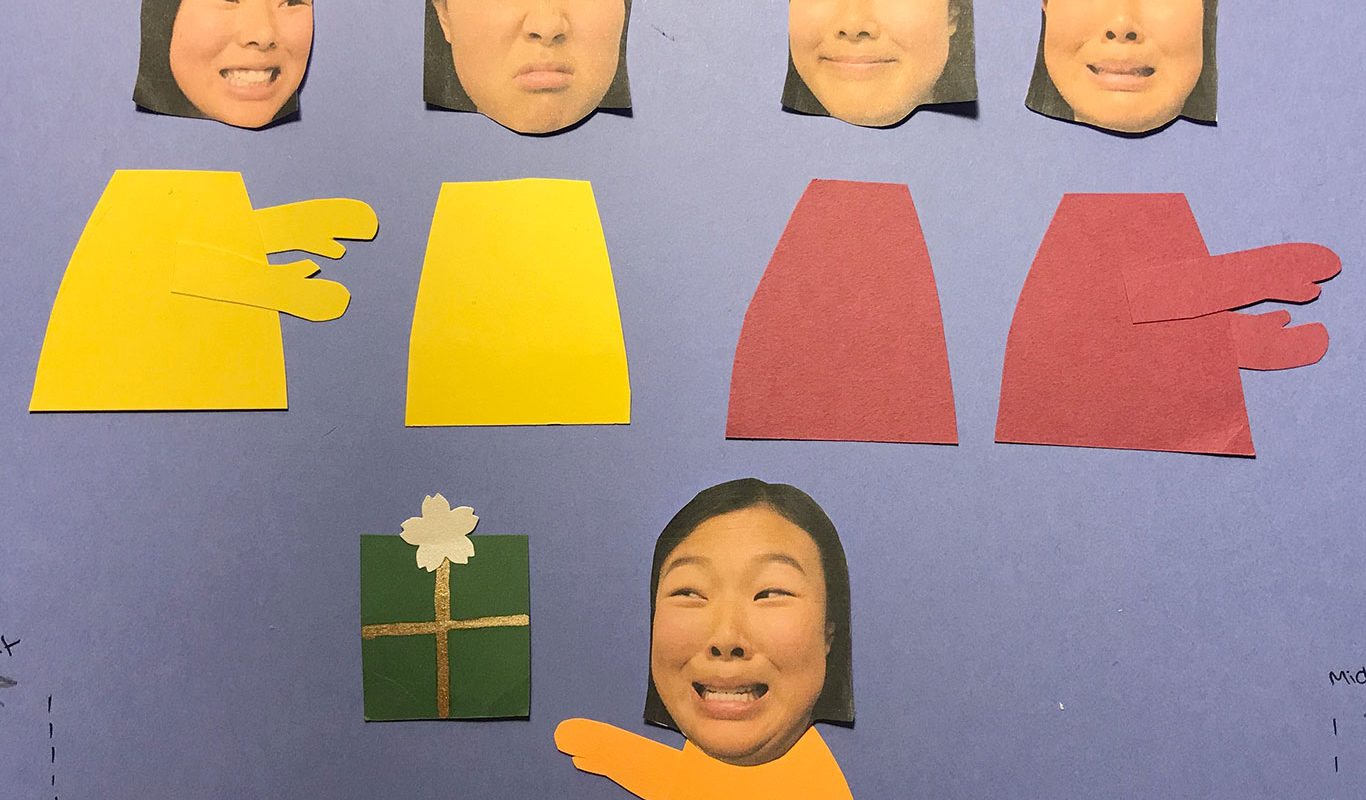 “I’ve always been hesitant to attempt stop motion and animations in general, mainly because it always looked so tedious and just felt outside my comfort zone. However, I quickly realized that it’s much simpler than it looks, and can actually be a lot of fun!

Telling stories by bringing simple objects to life opens up endless possibilities for creativity, because it forces you to take the ordinary and give it its own unconventional twist. And although the fancy technology and film effects nowadays are eye-catching, there’s something uniquely personal and intimate about a simple stop-motion animation that has its own kind of equally powerful charm. Especially when presenting scenarios like those in Social Q’s, stop motion perfectly suits the raw organicness of encounters in everyday living, and it was so fun to let out my quirkiness in a brand-new medium that I haven’t touched before.

However, one challenge was my struggle with my clunky outdated tripod–I couldn’t mount my phone with stability at the height I needed to properly size the objects on camera. In the end, I improvised with an old hairband, a lanyard and a metal phone stand to hang my phone–but I still got quite a bit of shakiness captured in my final product.” 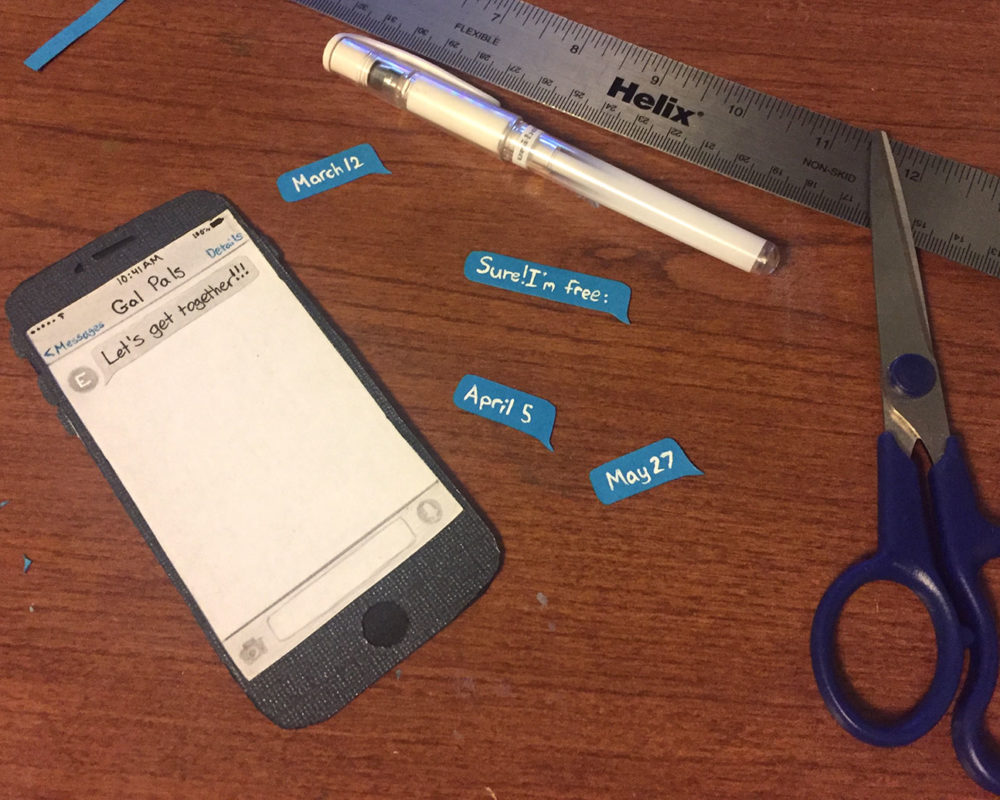 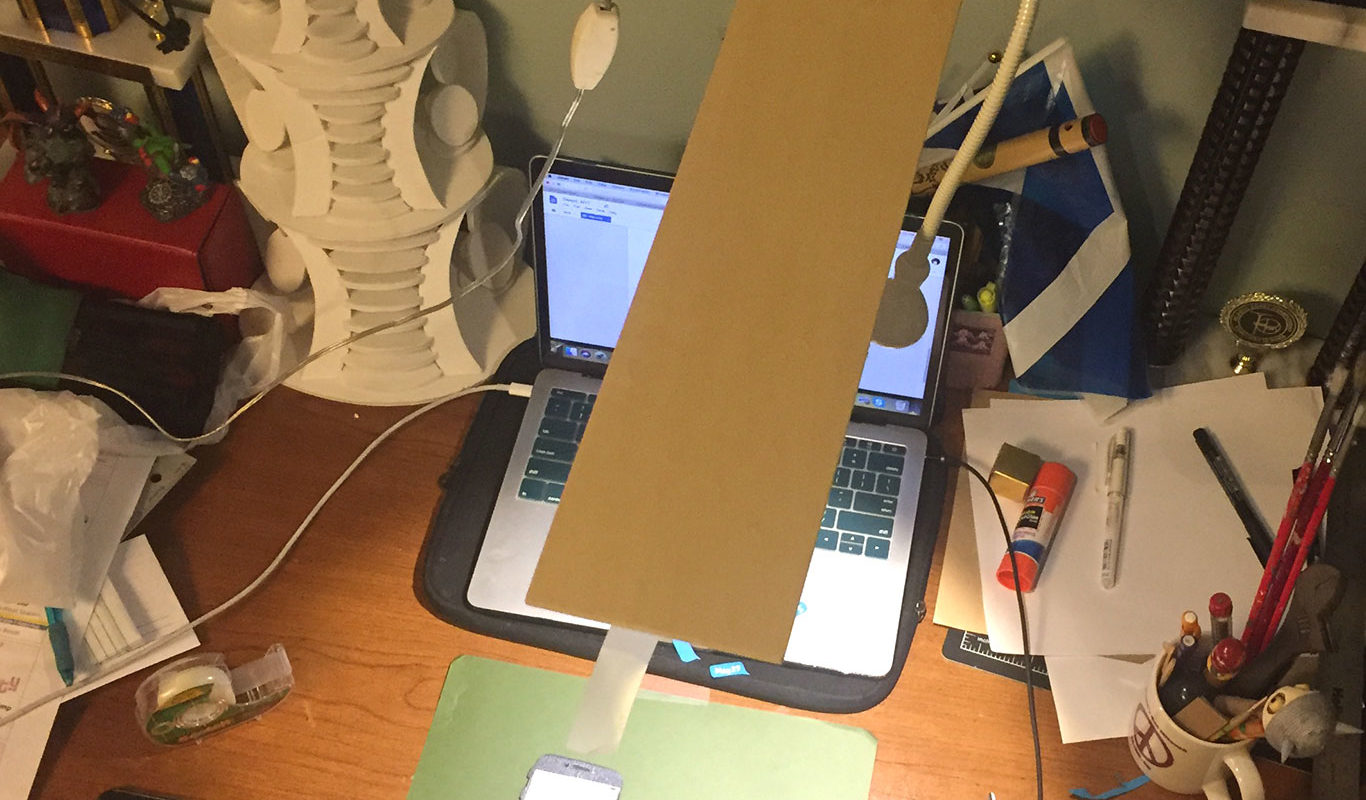 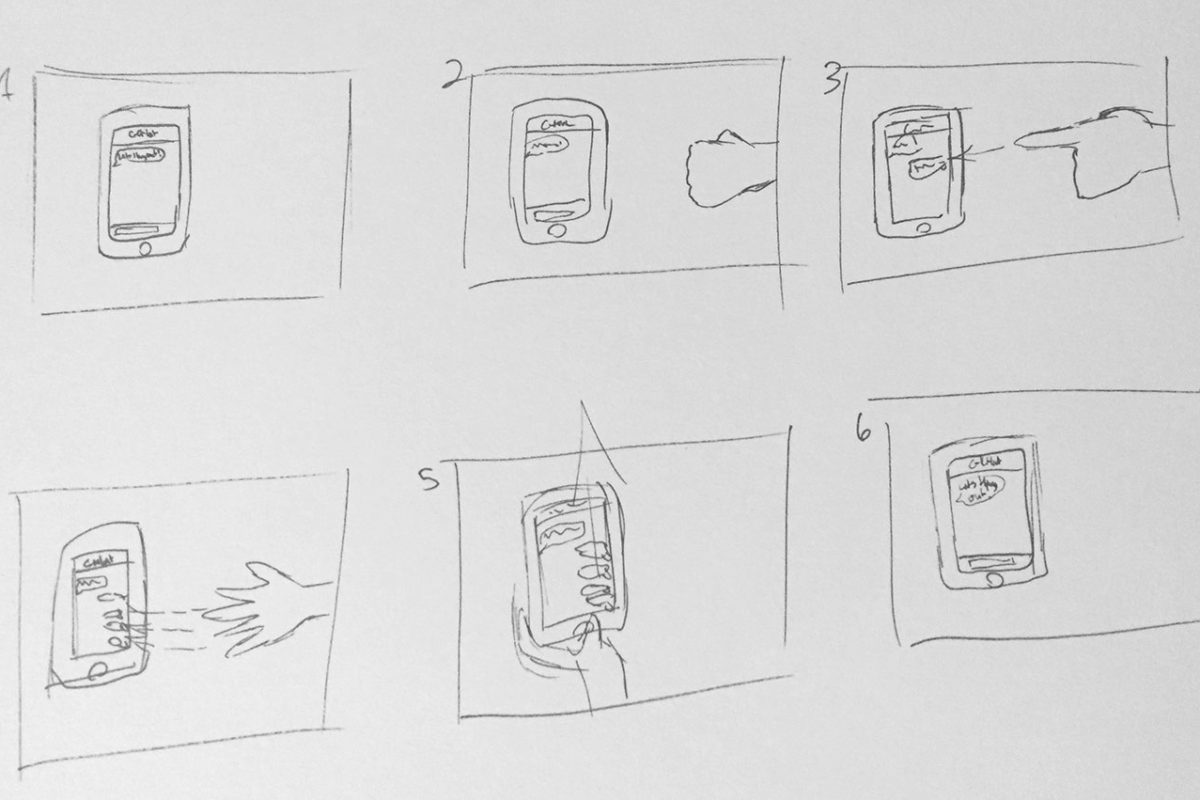 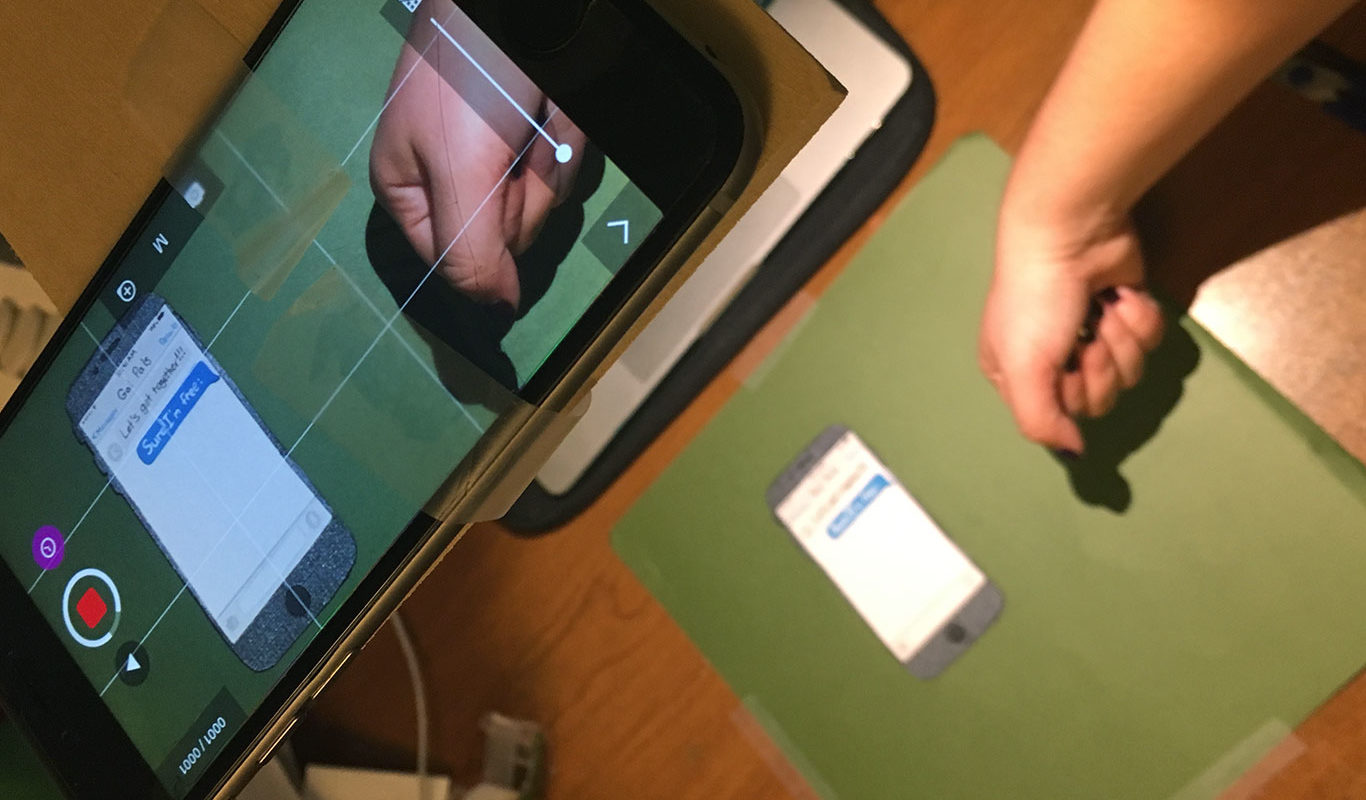 “I’ve always wanted to try stop motion animation, so I was really excited to start this project. Reading the Social Q’s articles was incredibly interesting; I found it hard to choose just one! In the end I went with an article I very much related to, titled “Scheduling Issues.”

It was mentioned that when you’re an incredibly busy person, it makes everyone’s life easier to just throw out a few dates in which you are free, rather than hoping that someone else just suggests the right ones. I really wanted to push the idea of actually throwing dates into a group chat, so I experimented with using my hand as well as inanimate objects.

Originally, I thought keeping my hand in place for every frame would be the most difficult part, but in the end it turned out to be the actual setup. As I don’t own a tripod or a selfie stick, I had to get creative: I managed to tape my phone to a piece of wood that was secured to a shelf above my desk. It was not the best of solutions, but it sure worked!

As for the animation itself, I found it quite easy once I got the app to work (my phone really enjoyed crashing the app the first several tries). I have taken a course in traditional animation this year, and although it is not the same medium, quite a lot of the skill translated over. I genuinely enjoyed stop motion more than I did traditional; I’d love to do more of it in the future!” 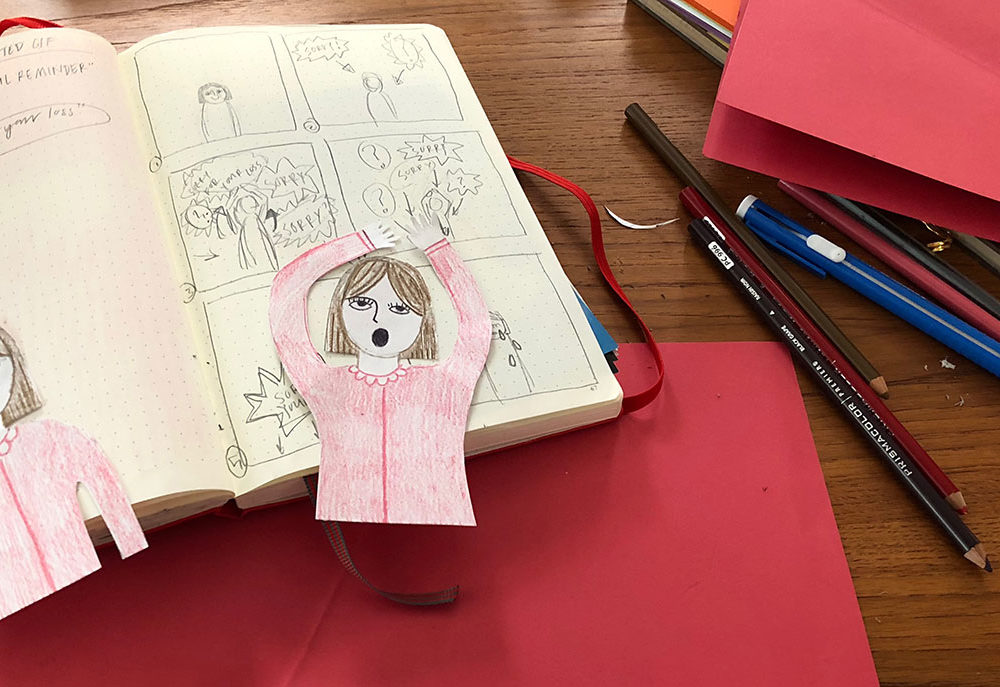 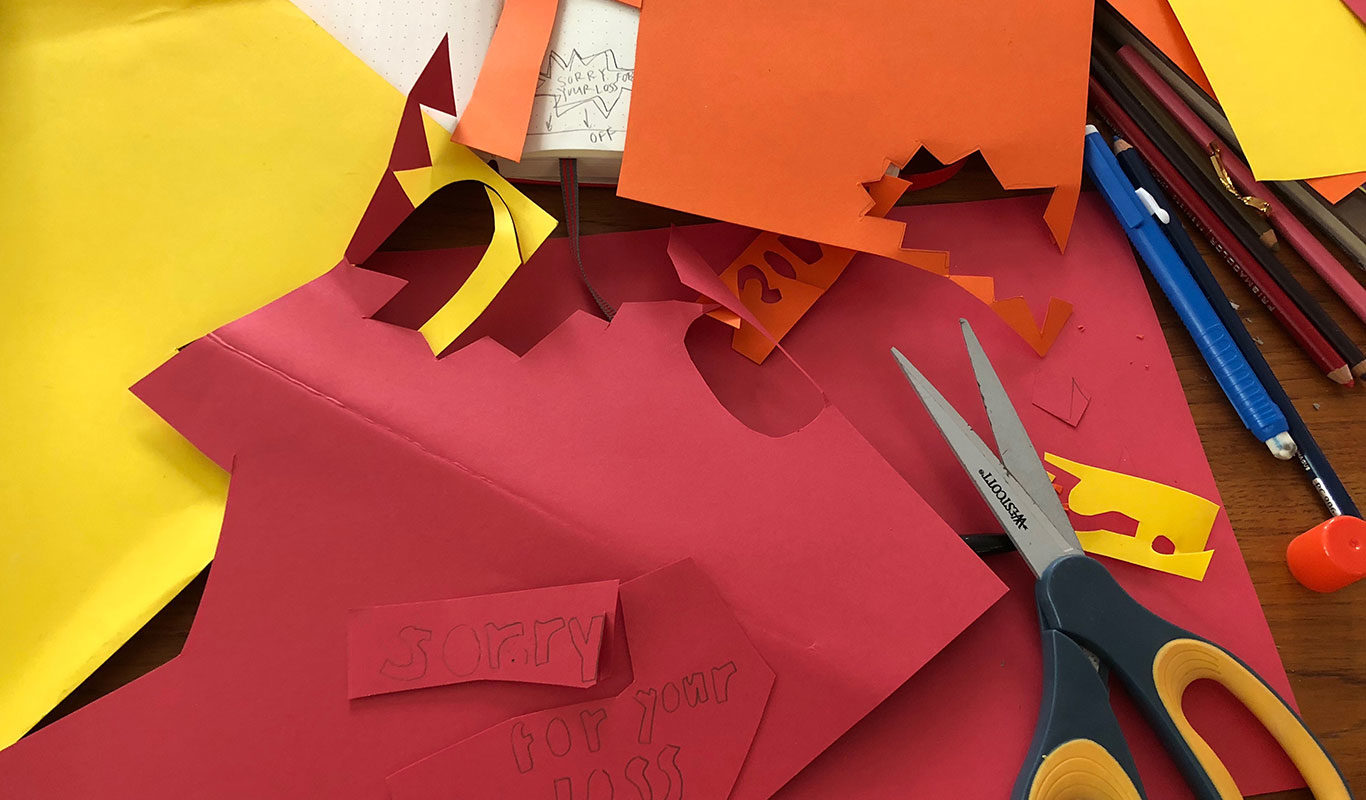 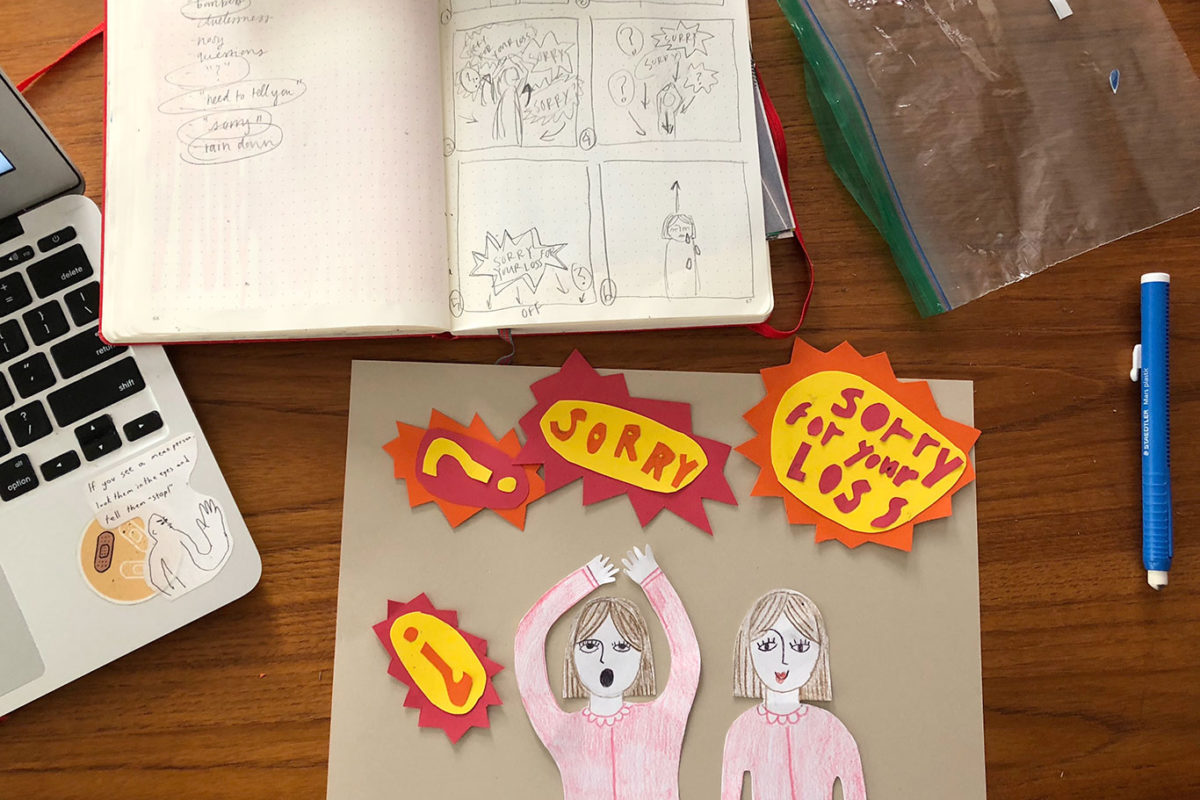 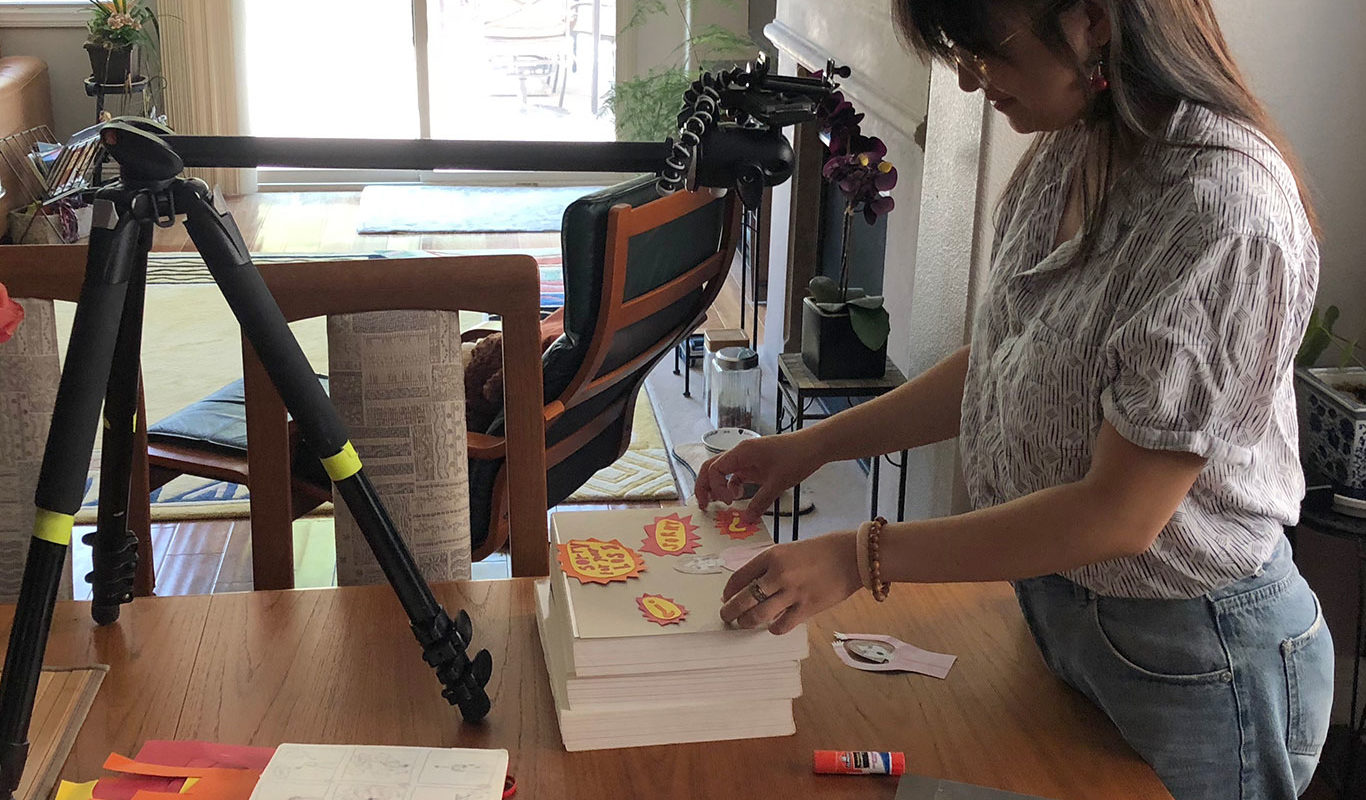 “Because of the stop motion movie I made for another project, I was already familiar with the Stop Motion Studio app on my phone and how to make a stop motion in general.

I had so much fun making and brainstorming for this project because I love seeing how a stop motion animation turns out. But I also think I enjoyed this project specifically because I had to develop and interpret an article. That aspect was more challenging but more interesting because I had to really focus on getting key aspects and important details and put them in my gif so that it would accurately capture the story.

I really enjoyed the idea of illustrating a written story and creating something visual for an article, especially as an animated gif.”