Create an mixed media collage based on a New York Times Obituary.

In this case, the obituary is about Lara Saint Paul.

“Lara Saint Paul, a popular singer who, inspired by Jane Fonda, kindled an aerobic fitness craze in Italy in the 1980s, died on May 8 in Casalecchio di Reno, near Bologna. She was 73.

Her death was confirmed by the Hospice Casalecchio di Reno.

Ms. Saint Paul — who was born in Eritrea, in Northern Africa, which at the time was an Italian colony — made her public debut at an Italian music festival when she was only 16 and rocketed to stardom after performing a duet there with Louis Armstrong when she was in her early 20s. She later recorded, toured and presented television specials featuring leading American and Italian entertainers.

In the early 1980s, borrowing a page from Ms. Fonda, who had demonstrated her entrepreneurial and physical prowess with a series of aerobics videos, Ms. Saint Paul produced a wildly successful aerobics video of her own, along with an album and a book. Italians all over were soon copying her pulse-raising moves to a dance-music beat.”

2.
Brainstorm images that visually represent the obituary by creating a mind map.

Watch this video below starting at 01:33 min. for tips on brainstorming & mind maps.

3.
Experiment with mixed media collage to determine your materials.

Watch the video below starting at 08:30 min. for tips on collage.

4.
Create your final collage. Layer the materials so they make a cohesive composition. 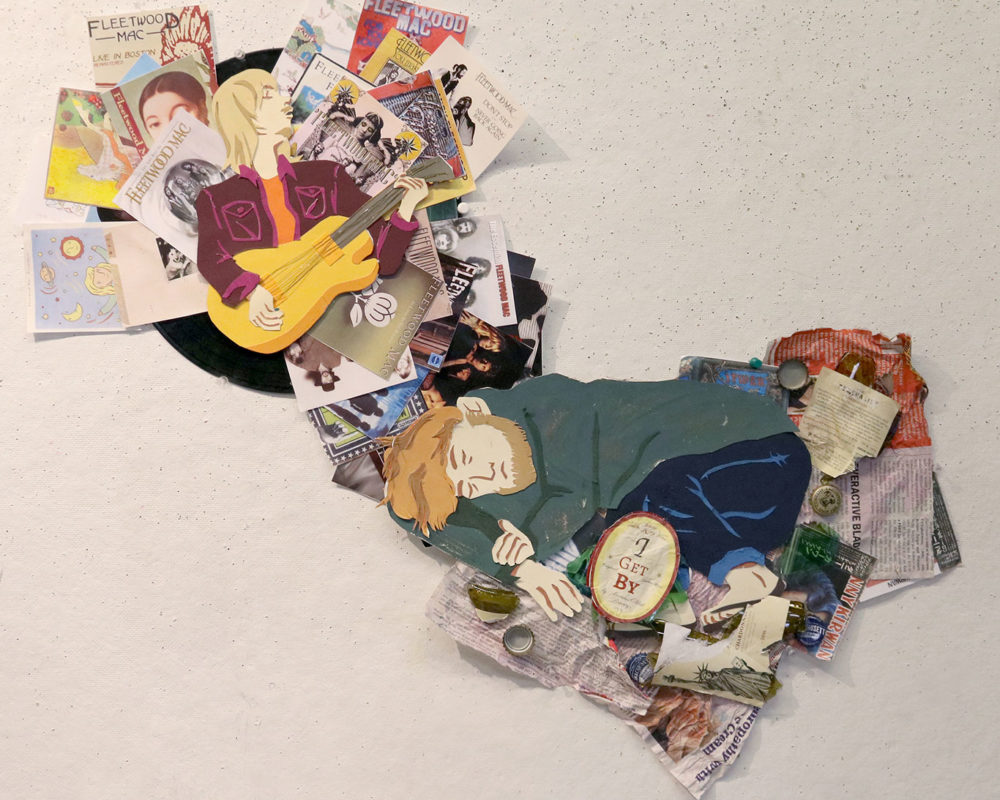 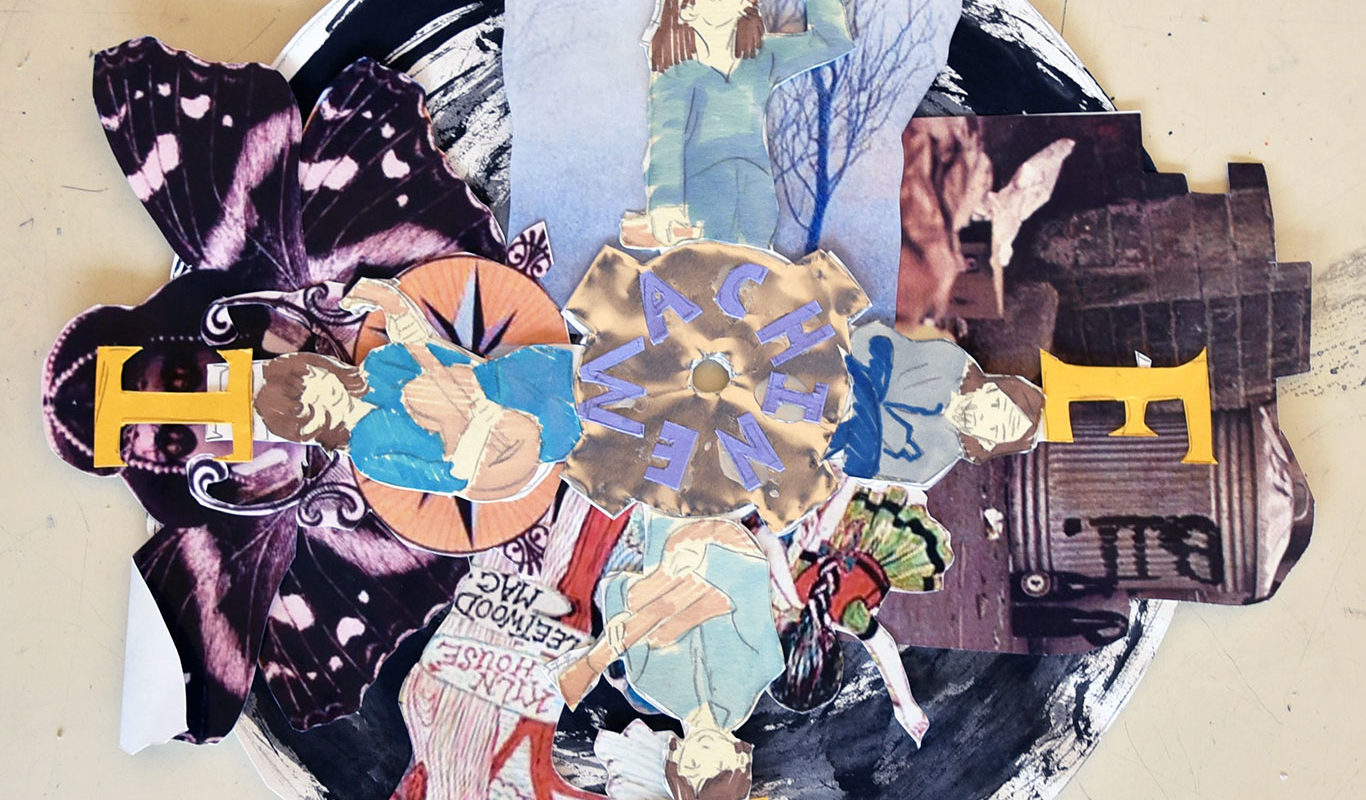 “I was never really a big fan of collages until I did this project. Researching through the obituary we had to choose a person to do a collage on. Danny Kirwan, who had recently passed away from pneumonia, was the man I chose for my collage, more known to be from the band Fleetwood Mac.

Throughout the brainstorming process I researched a lot about Danny and I was a little overwhelmed by the amount of information I had about him. I focused on two themes of his life, the time he spent in the band and compared it to the time he spent after he was kicked out of the band.

For one of the thumbnails Danny is laying down curled up and I used the album covers as clothing and for the words. For the other thumbnail there is four Danny’s from when he was young in the band to when he was old and homeless. But neither of these ideas were strong on their own so I combined them to make my final piece. For materials I wanted to use the album cover art. Along with that I wanted to use a record as part of the theme so I used it as my base for putting the album covers on and bright solid colored paper to collage Danny on top.

The covers are layered under Danny branching out off the record to show the overwhelming influence he had on the band. While the Danny laying on the floor has dark toned paper for himself while under him is discolored and crumpled newspaper with his solo albums just peaking out from under him. With that there is broken alcohol bottles around him with bottle caps.

One label is prominent and is on top of Danny’s leg with the alcohol label clearly visible with the phrase I chose for the project “I get by” in which is a quote he said in an interview about being homeless instead of using the phrase “Life Machine” which can be seen in the thumbnail collages.

I learned a lot throughout this project from researching to coming up with thumbnails and going to the final project along with the different materials. In making my final project I learned how intricate it was in making the two Danny’s, the use of solid colored paper and using it to give detail in shadows and having it outline his face, hair, and clothes. In the process I even used recycled bottles and smashed them to get the broken glass for my collage.

When it came to the importance of telling the story of Danny Kirwan, I learned to portray him not as a stereotypical band member but as a unique member.” 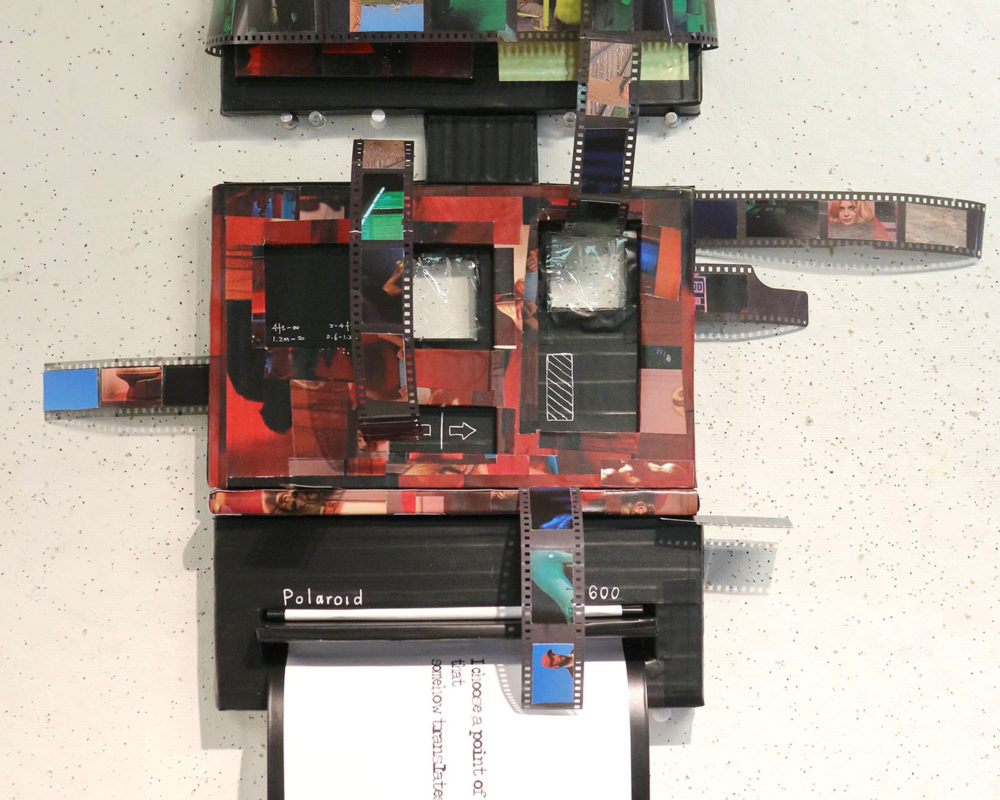 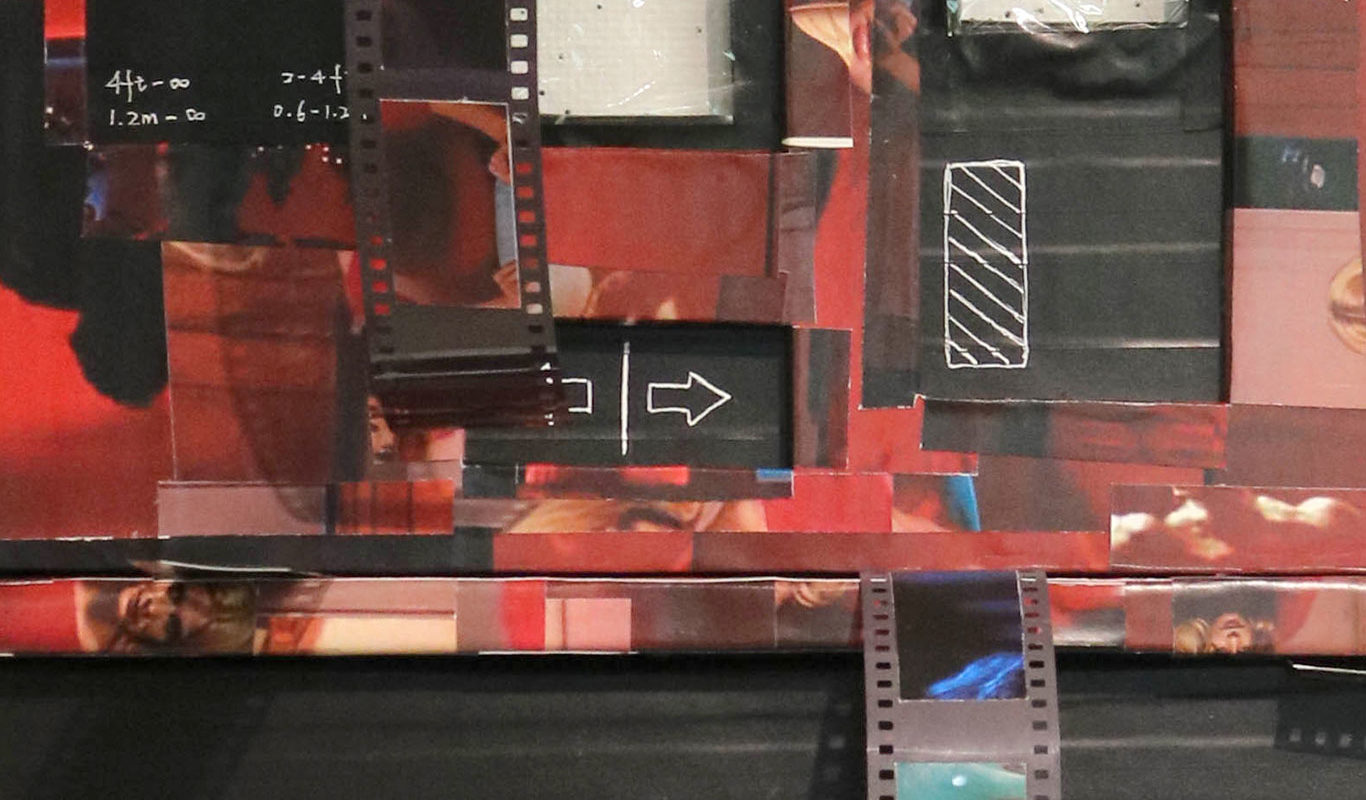 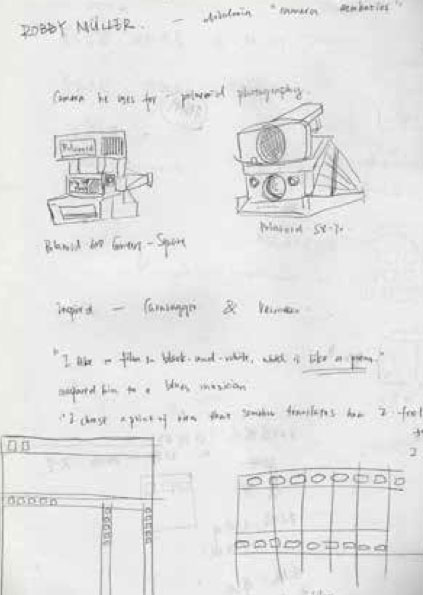 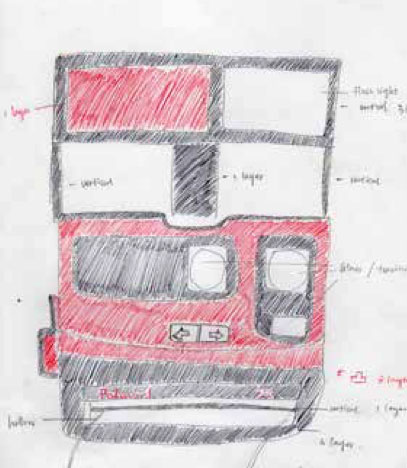 “When I was asked to find an obituary, I skimmed through the newspaper and found out about a cinematographer, Robby Müller.

Then I find out that Müller liked to use Polaroids and shot many movies with bright and strong colors, usually red and green. To do a portrait, usually the first thing that would come to your mind is the person’s face, but then I think, why not use his career itself to represent the person?

I looked through Müller’s photo collection and found out about the use of Polaroids in 1980s. I made a model of a Polaroid camera, with cardboard covered with electrical tape.   I used plastic and metal paper to make texture, and covered the part of the Polaroid with the red colored film stills from his movies. I learned that to make a portrait does not mean someone’s face, but his distinguishing features.” 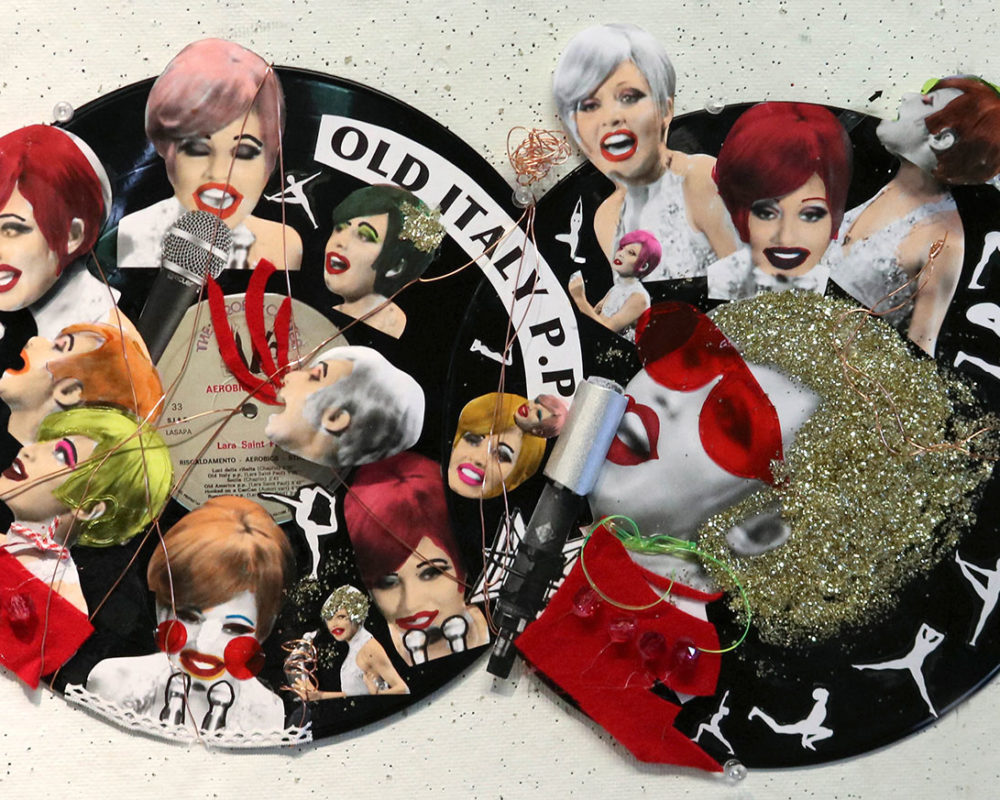 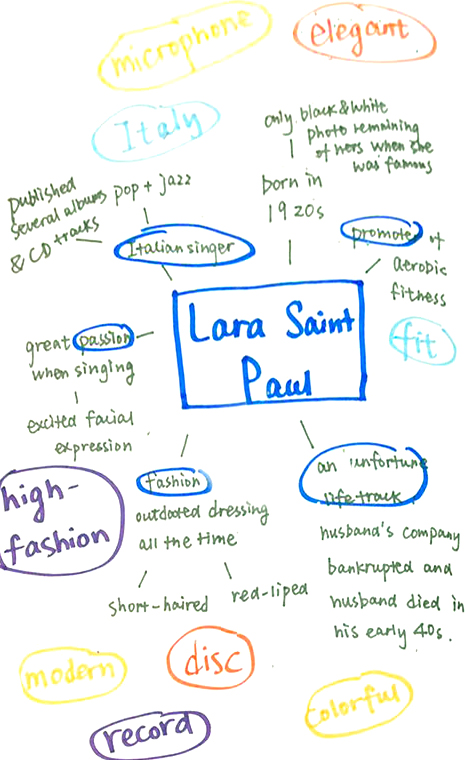 “When I first did research about on the obituary of Lara Saint Paul, I was overwhelmed by the lack of information about her. Only a few websites had her information on. I concluded everything I got into several key words: ‘Italian singer,’ ‘jazz & pop,’ ‘exciting performance,’ ‘fashion dressing style,’ and ‘aerobic promoter.’

Then I did the mind map about her and started to explore materials that I could use to better perform the character. Based on the limited information, I plan to make a collage about her impassioned facial expression and her fabulous dressing style with indication of music around her. I screenshot around 80 photos of her performance on YouTube, printed them and play with the positions of the faces.

I learned to connect the key words and materials that I can use for the collage and freely explored the way to present the obituary in very interesting way so that the audience could notice her characteristics at the first glance .”