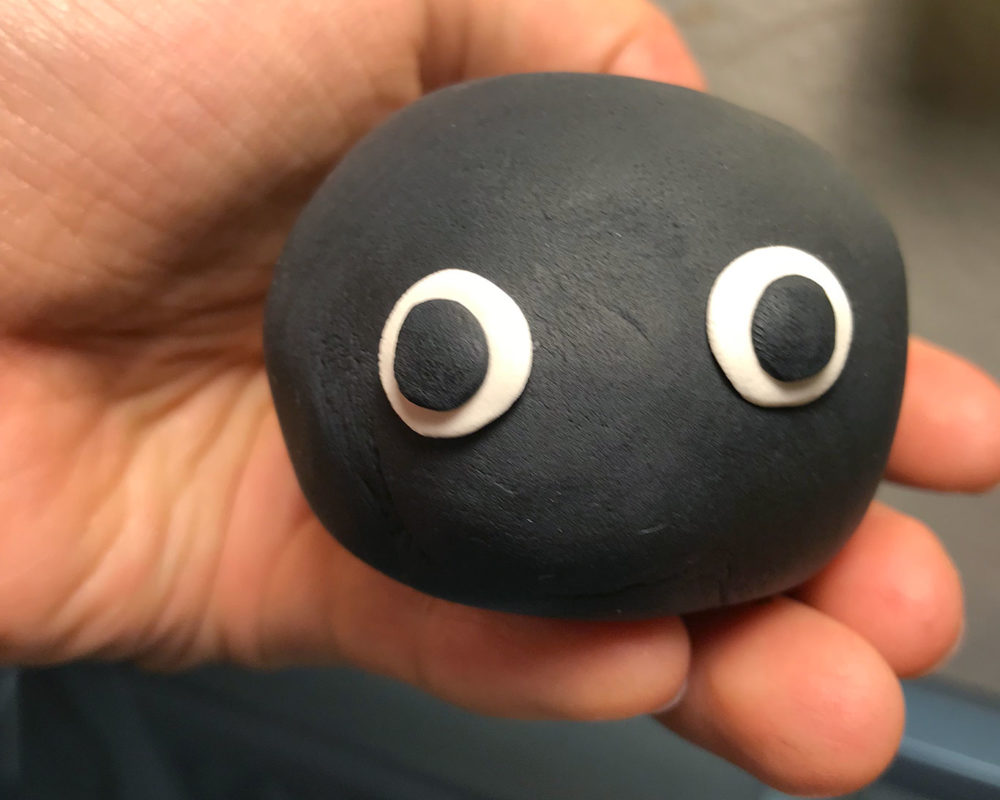 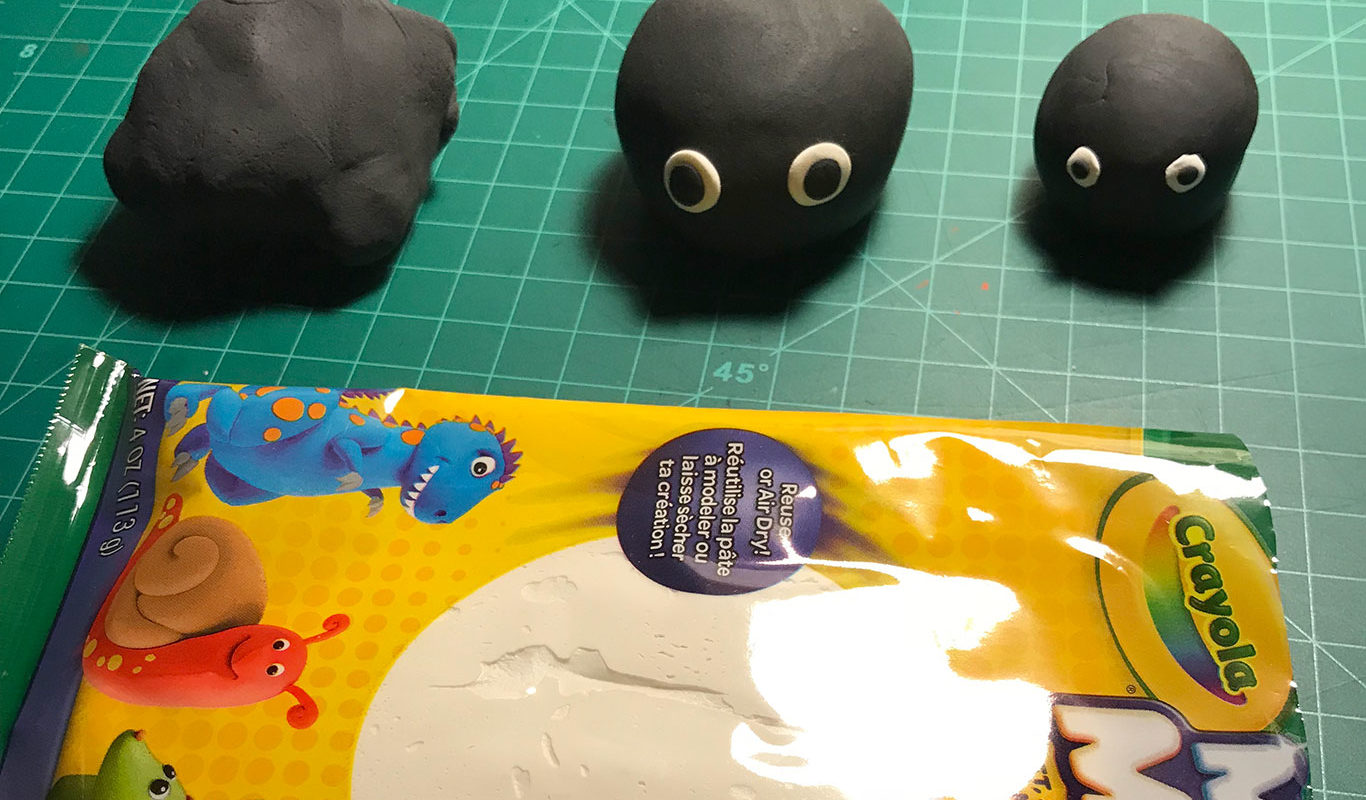 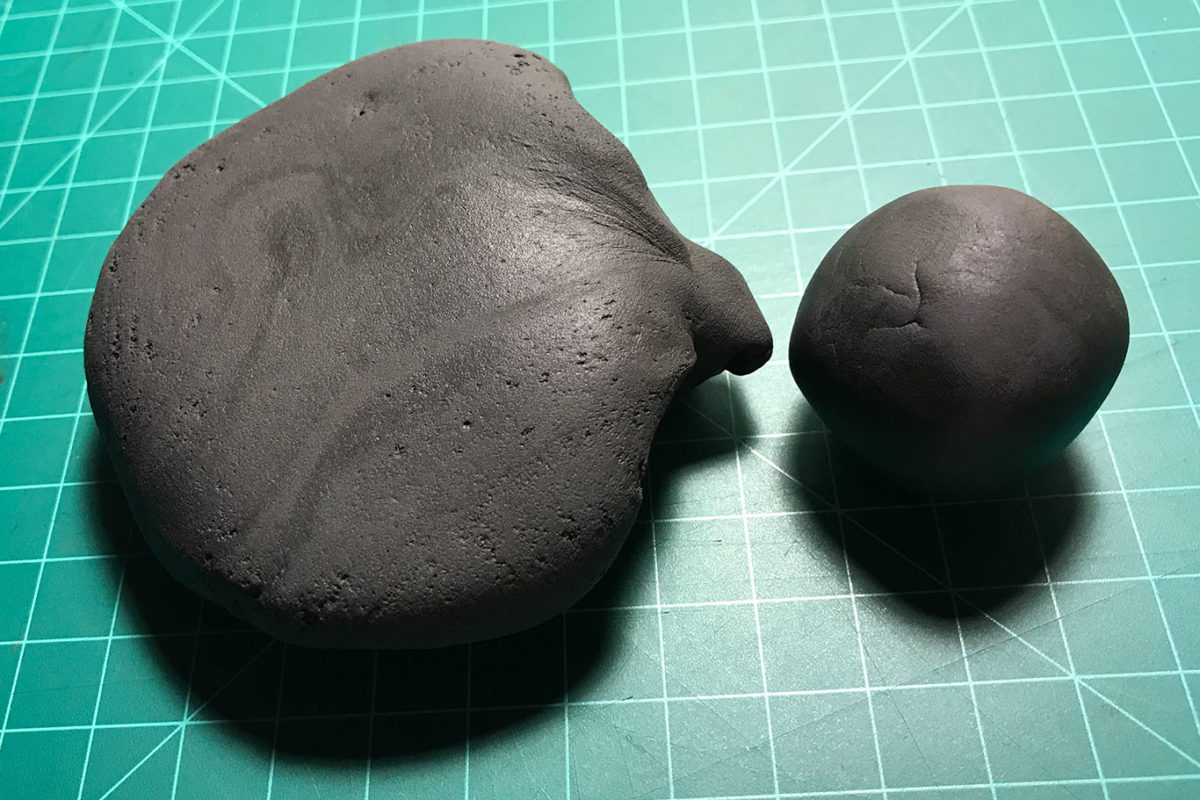 “In producing this animation, I realized just how easy and fun it is to work with clay. Because it’s such an expressive material, and so easy to manipulate in all different ways, it effortlessly can bring forms to life, and with enough precision, produce fluid movements through stop motion that are hard to capture with other mediums.

I didn’t even plan my story line in the beginning–I just started working the clay and decided to come up with and create things as I go along. The only struggle I encountered in the process was slightly deforming my characters by accident as I moved them around. Because the material is so soft, it’s easy to slowly alter the original shape of a clay object without realizing it after picking it up and moving it around so much.” 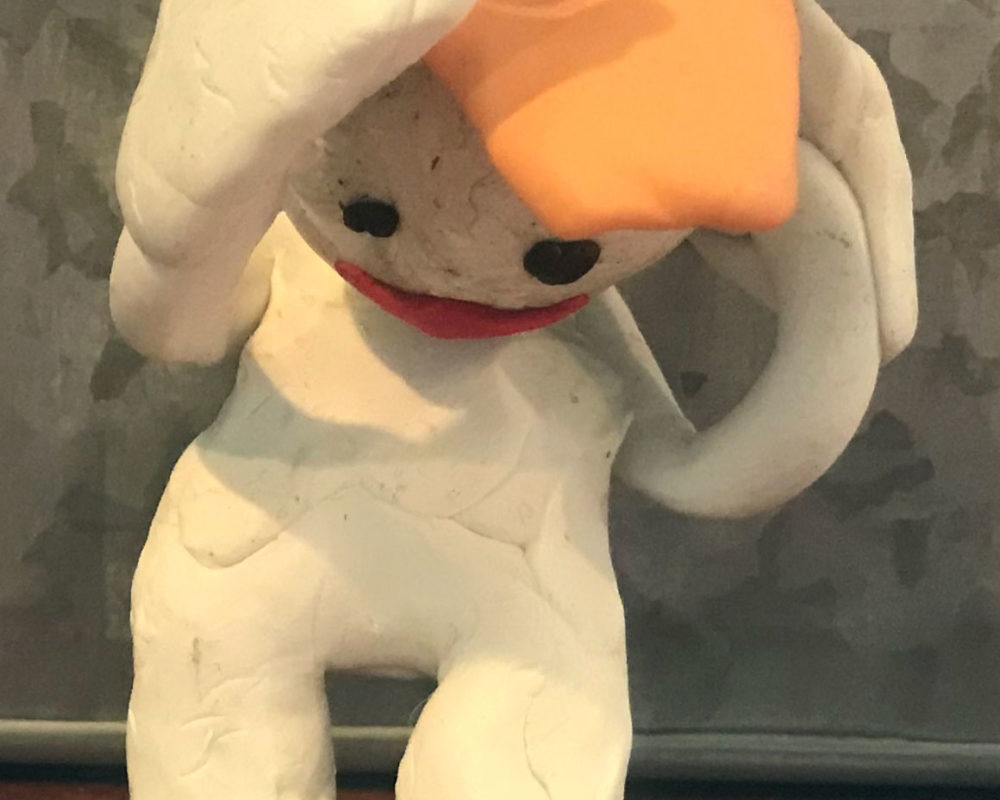 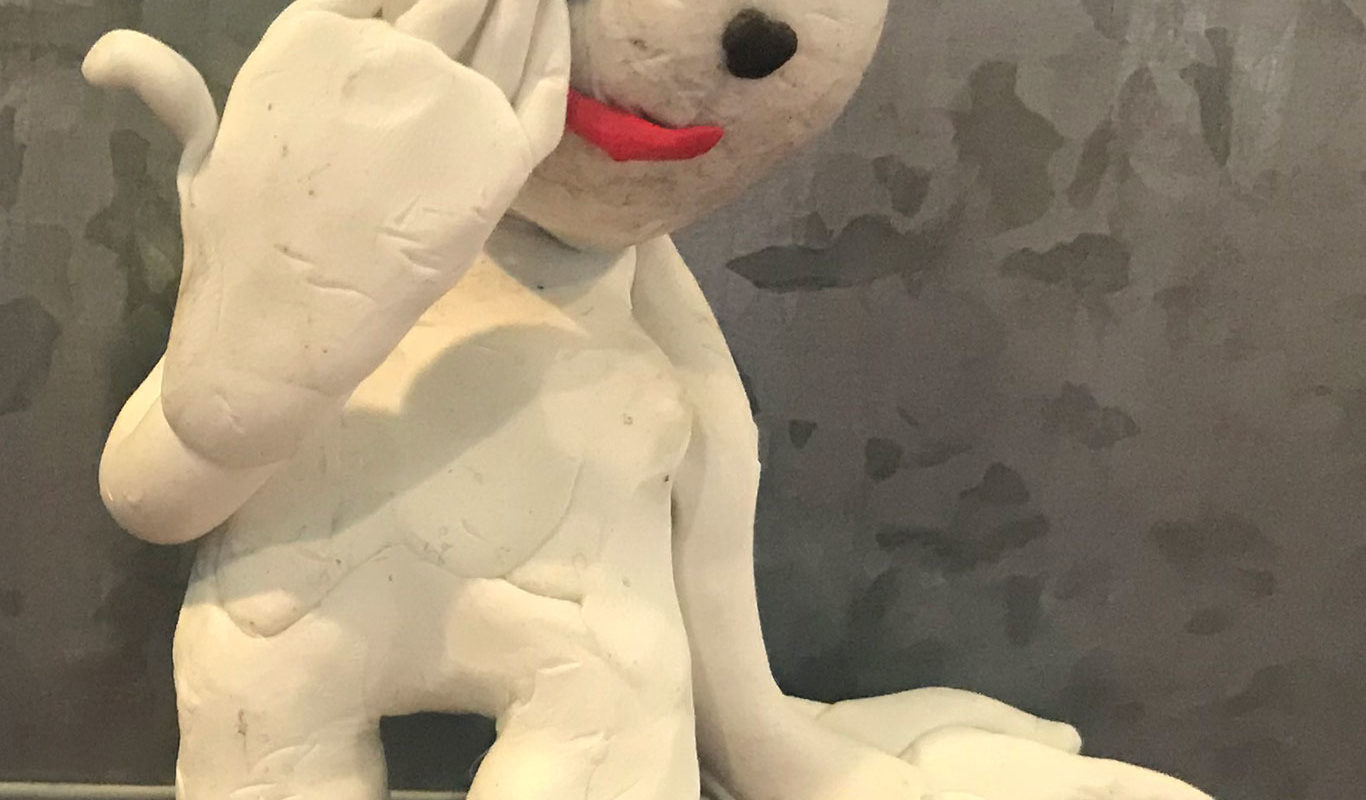 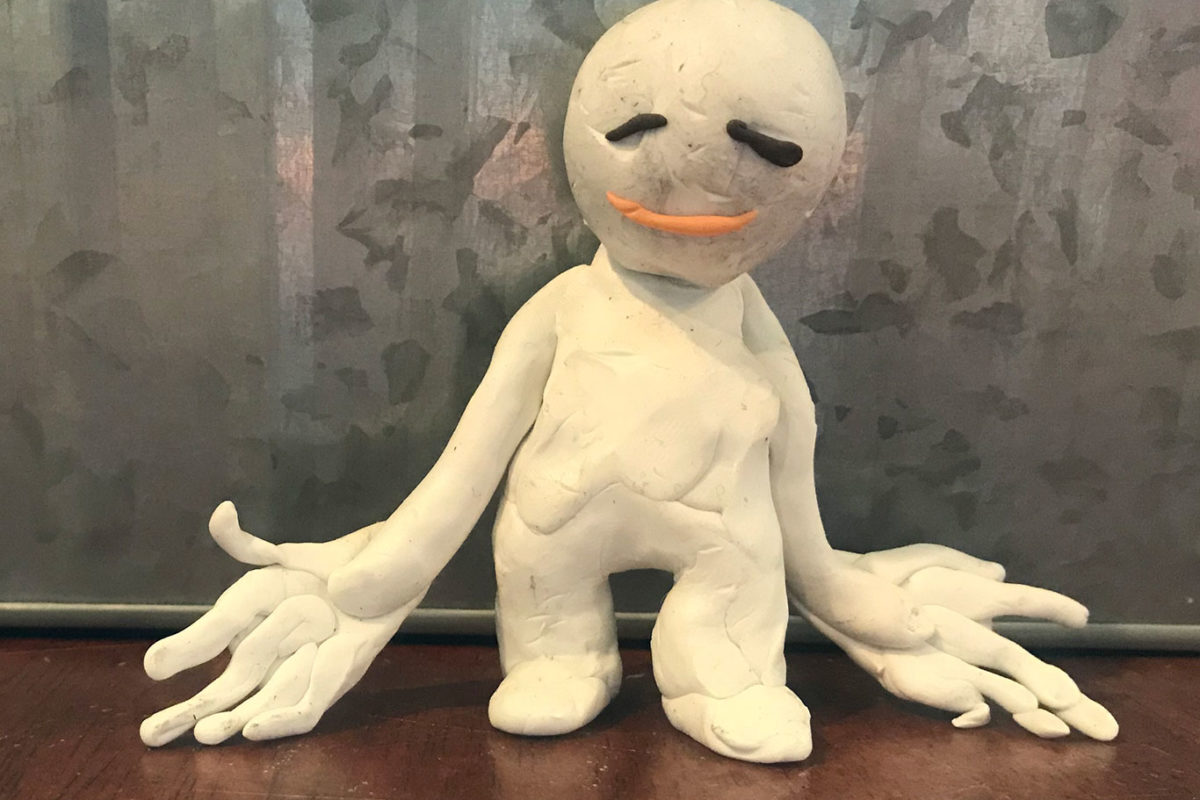 “This project was very eye opening for me. Coming from a mainly 2D artistic background, dealing with clay and sculpture was sort of intimidating at first, but after messing around with the clay and getting a feel for it, it was actually very fun!

I went through a couple of animation ideas which I wrote down, but I ended up going with one about a little character (Paulie) showing off his personality through a few quirks and movements. Not only did I get to learn how to work with clay a bit more, but I also got to build a character that does not conform to anatomy norms, which was incredibly entertaining for me.

One thing I could do better next time is, again, figuring out how to take consistent photos of each position so that the final project is not choppy.”

“This piece is about the conclusion of my four years of high school. I’ve picked up habits that are specific to my school, such as using the right bathrooms and knowing which food is edible in the cafeteria.

I chose to convey my message with stop motion animation because I felt that it would allow me to use different materials for textures. I am heavily interested in fibers, and creating an animation allowed me to explore a new way of working. I’m so grateful for Deepti’s tutorial because it was simple and provided me with a good foundation for making this video!”

“Animation has always been something that has absolutely terrified me. Whether that’s because of how tedious it is or how incredibly detailed it is, I’m not sure. But I have always admired it from afar, always too scared to try it out.

The Stop Motion Animation project was an amazing and fun experience because I have never even done animation. The process was incredibly enlightening and I had so much fun exploring different materials I could use like coins, buttons, and tissue paper.

I loved figuring out a story I could tell and the entire process was just completely different from all of the other art pieces I’ve done before. There are parts where I wish I had better focused the camera or taken my time to capture more frames.

However, overall, I was amazed and surprised to find that animation could be simple. I was scared it was going to take me forever to figure it out, but it didn’t. It’s a super playful medium, especially for storytelling, and I’m definitely going to do it again.”

Deepti: “Stop motion animation is a really fun and easy way of approaching animation that uses found objects, or objects that you’ve made, generally 3D objects to create an animated film. I particularly like stop motion animation because if you don’t have a lot of experience animating or a lot of experience making objects, this is a really easy way to jump right into animation because you can use things just found around your house.

All you really need is a series of objects and then an image capturing device. Like a smartphone or a camera. So it’s really quick and you can achieve a lot in a small amount of time.

Casey: “I think it’s interesting that you said you can use household items, because to me i think of stop motion animation and the first thing I think of is Wes Anderson’s ‘Fantastic Mr. Fox,’ or ‘Wallace and Gromit’ cartoons. And then to realize that you can use just anything basically anything, that’s a 3-dimensional object is really cool.”

Deepti: “You have an object and you move it rather than redrawing every frame, that’s kind of the difference between stop motion and cell animation. I think it’s even more fun to get something like clay and create your own objects so your film has a little bit of personality and individuality.

In the past, with the air dry clays that I’ve used, I find that they always crack once they dry. They kind of come in not great colors.”

Casey: “I remember being a kid and my mom would always look for something for my brother I to do, like crafts-wise. And we were always trying ike new clays. So we’ve tried like it all, and so I have really no idea what a good brand of air dry clay is.”

Deepti: “We can start by talking about this type of clay, which is the resin clay. You can mix the resin clay, and create new colors by mixing the two colors together.”

Casey: “I thought the cream clay was really cool. It really does feel like, exactly like frosting.”

Deepti: “Yeah so airy, and like fluffy. Foam clay is the most unique, because it has such a distinct texture to it. Before using this air dry clay for some of my work, I would use oven bake clay, and actually press into to create like a fun bumpy texture, and I found using the foam clay,  I totally don’t need to do it anymore.

I don’t like planning too much in advance just in general as an artist because I find that I get too disappointed with things not turning out exactly how I wanted it, which is kind of inevitable. So I’ve found that acting spontaneously with my work, especially with things like this that are more for fun and experimentation, works a lot better for me.

I just never think of an animator as that kind of person because in my head that takes so much planning to put together an animation.”

“Yeah, the great thing about stop motion animation is like, to objects you’re making matter less than how you move them, or like how you’re using them in the animation so, it’s really fun to just, mindlessly create a bunch of objects that you think will look cool on screen.

But then you can manipulate them to give them even more life and character. What I have here is I have a tripod arm, and it’s in this s curve, because I want my iPhone stabilized on it. But I also want the iPhone to have the camera pointing down, and the screen pointing up so I can see what I’m animating.

This tripod arm is really inexpensive. Make sure that you’re camera is stable because you don’t want the camera moving between each photograph. Then I have a colorful piece of paper taped to my table. You can use a patterned piece of paper, you could even use a white one if you want. But I’ve just found that a colored one gives it an extra pop.

The app that I’m using the stop motion is called Stop Motion Studio. There are stop motion versions for both the iphone and android phone and they’re both free apps. When you open the app, this is the screen that you get.

What you want to do is you want to tap new movie, sometimes things will come up, you can just hit dismiss, and it will prompt you, tap here to add some pictures. And then you see your live view.”