Using a New York Times article, create a piece that where the first half  of your process is created using traditional media and the second half is created with digital media, or vice versa.

1.
Choose an article from the New York Times that you would like to illustrate.

In this case, we are illustrating the article “Steve Ditko, Influential Comic-Book Artist Who Helped Create Spider-Man, Dies at 90.”

“Steve Ditko, a comic-book artist best known for his role in creating Spider-Man, one of the most successful superhero properties ever, was found dead on June 29 at his home in Manhattan, the police said on Friday. He was 90.

The death was confirmed by Officer George Tsourovakas, a spokesman for the New York Police Department. No further details were immediately available.

Mr. Ditko, along with the artist Jack Kirby and the writer and editor Stan Lee, was a central player in the 1960s cultural phenomenon known as Marvel Comics, whose characters today are ubiquitous in films, television shows and merchandise.”

2.
Brainstorm your ideas by doing a mind map. Start with either digital or traditional media.

Watch the video below starting at 01:33 for tips on brainstorming & mind maps.

3.
Create thumbnail sketches to plan out your composition, make your sketches diverse and different from each other.

Watch the video below at 03:19 min. for tips on thumbnail sketches.

4.
Take your sketch into the next stage by doing a loose drawing. If you started with digital, finish with traditional, and vice versa.


5.
Clean up your line drawing for the final illustration.

In this case, the Procreate app on the iPad Pro was used to clean up the lines.

6.
After you clean up the line drawing, lay in some flat colors or values.

For digital painting techniques, watch this video below.

7.
Add the final touches and details to your illustration. 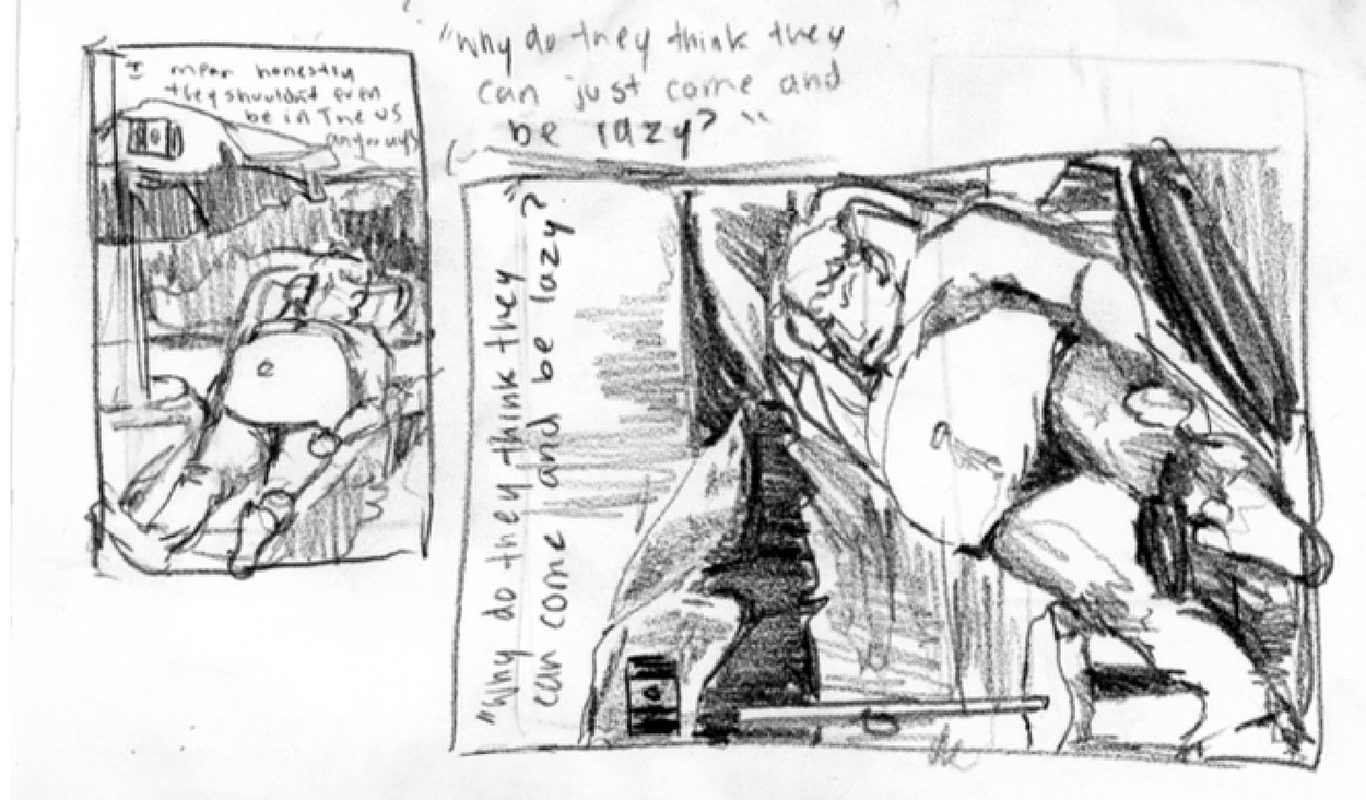 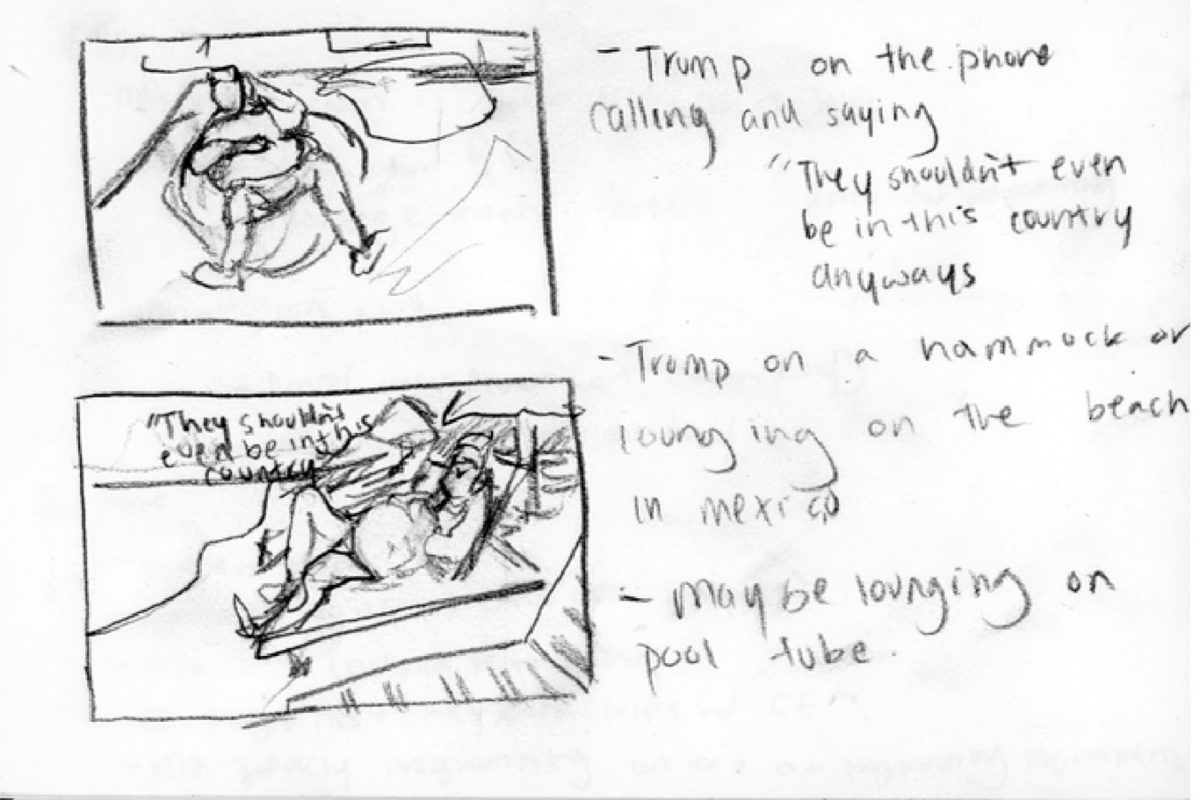 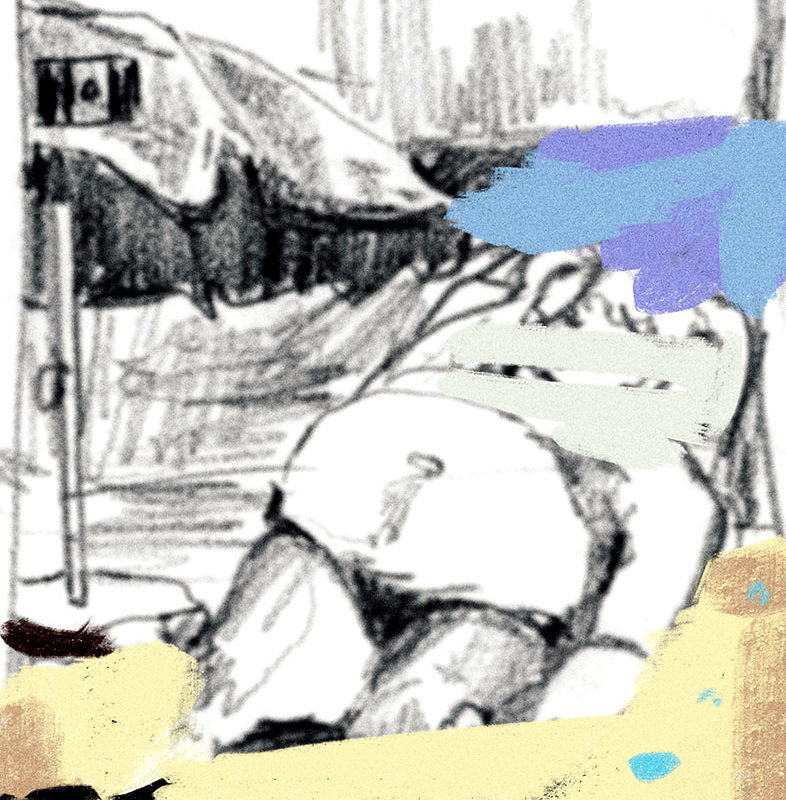 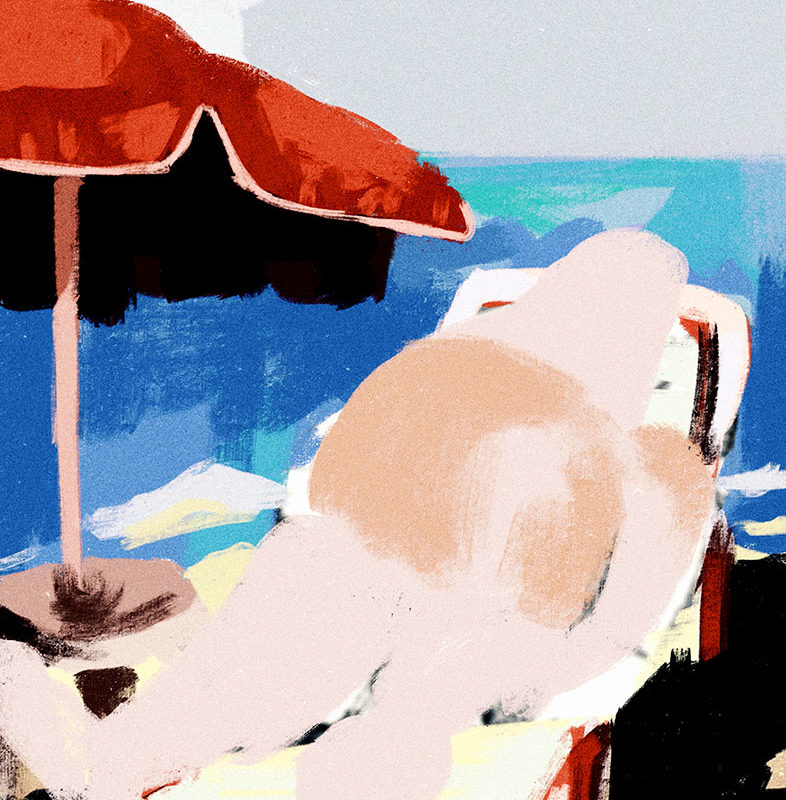 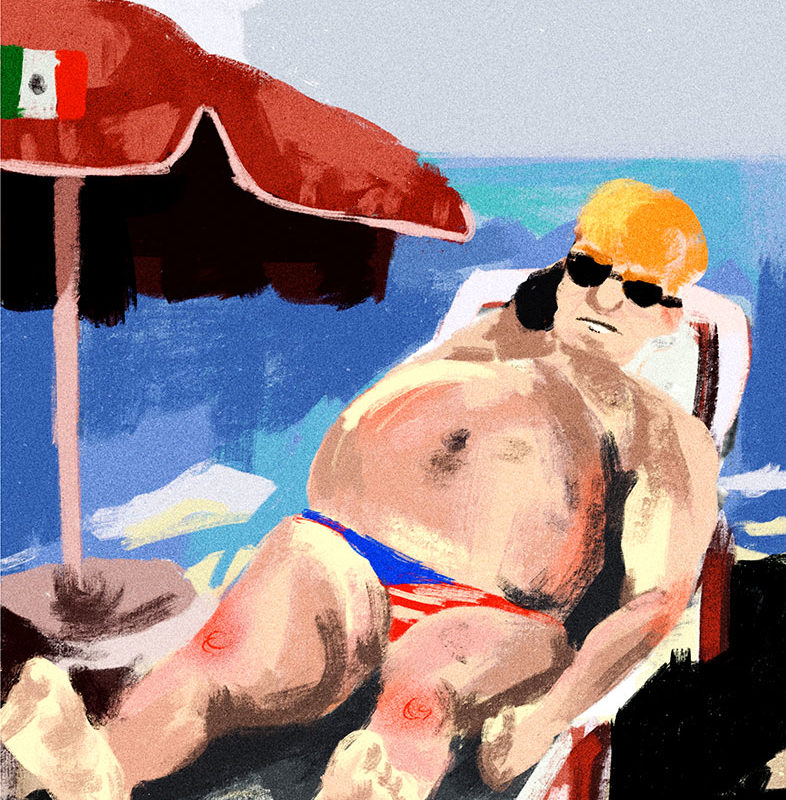 “This project was a very interesting challenge for me. Normally, I go for a more whimsical storytelling aspect in my illustrations. However, this time around I decided to go for a more political approach. This was personally very hard for me because I found it difficult to create an image that would convey irony with a serious topic.

I based my illustration on a New York Times article titled ‘Trump’s Immigration Policies Explained,’ that discusses Trump’s immigration policies. I wanted to convey the irony in how many right wing Americans believe that immigrants are lazy and unethical. But in reality, those people are usually the ones taking beach vacations in South America. For this piece, I first started with a few thumbnails to help create a foundation for what my illustration was going to be about and look like. After I had found a thumbnail I had liked, I then did it on a larger scale.

Converting it from traditional to digital was actually the most difficult for me. I had felt for some reason more committed to following my sketch even if it was more proportionally off. This project however was very eye opening and inspires me to make more politically driven art in my future works.” 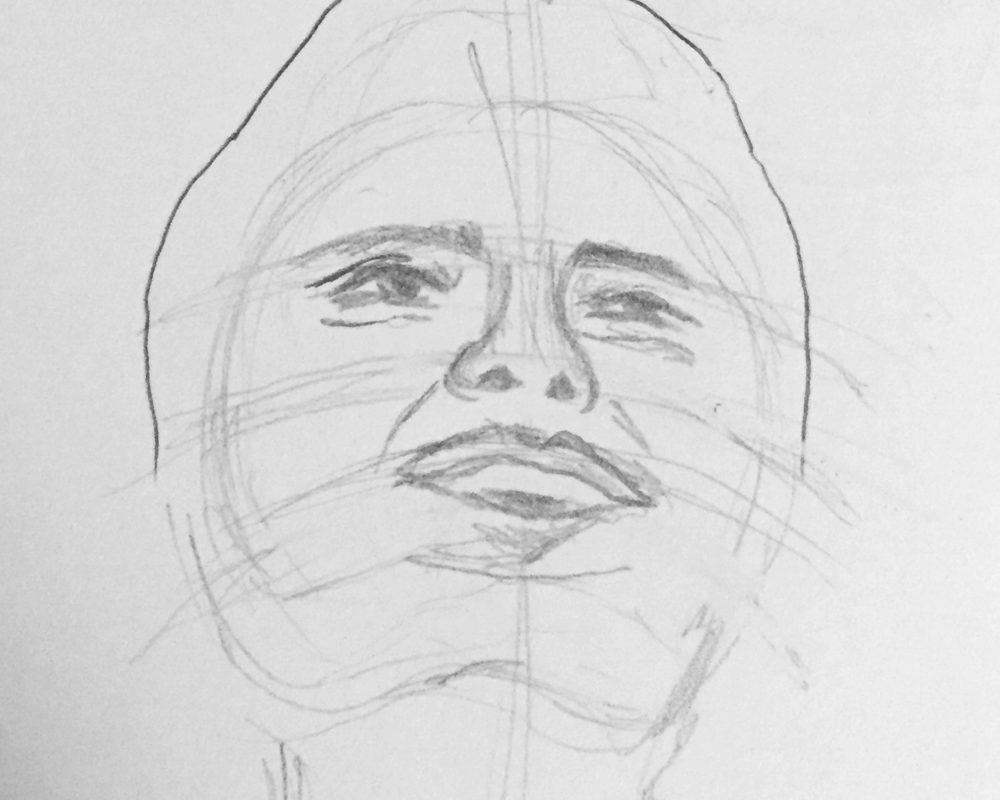 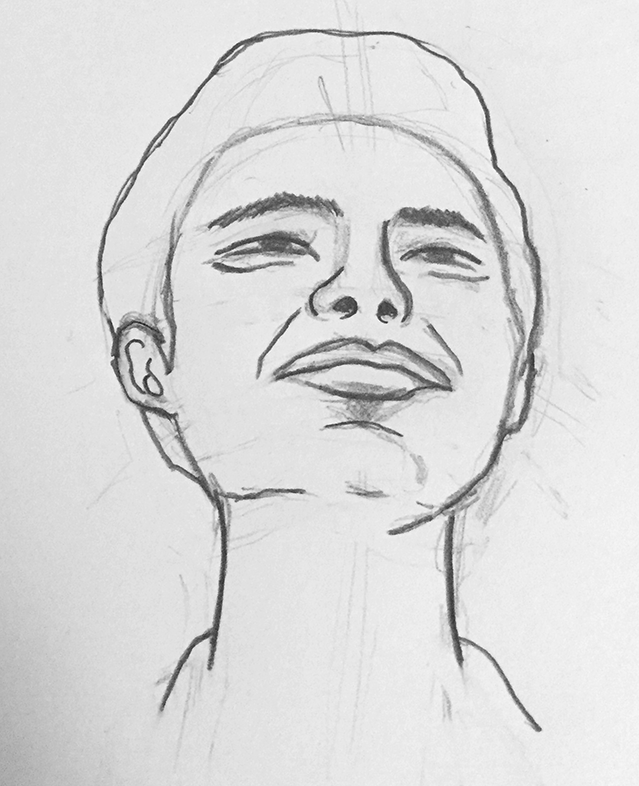 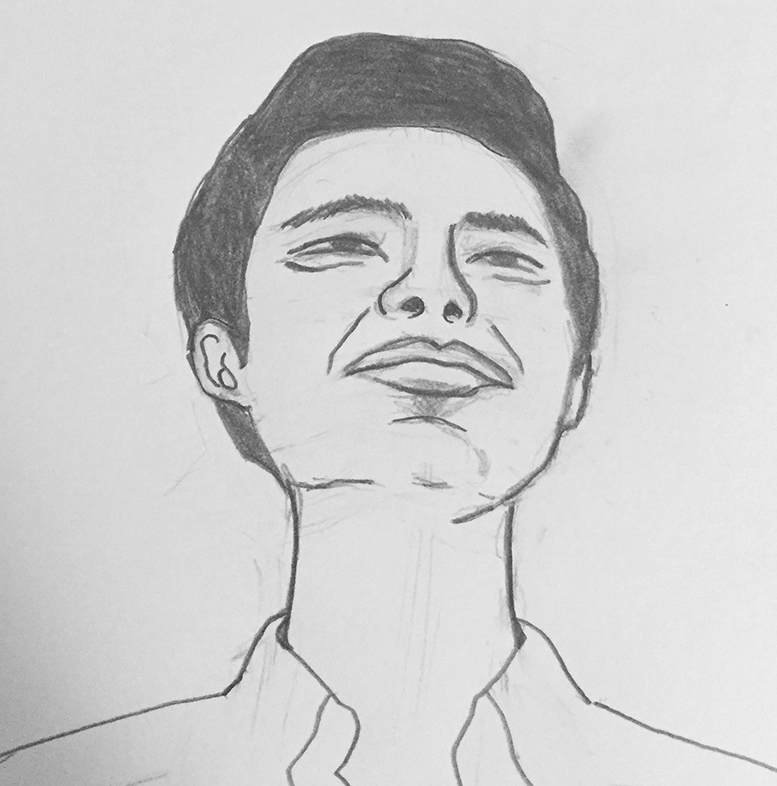 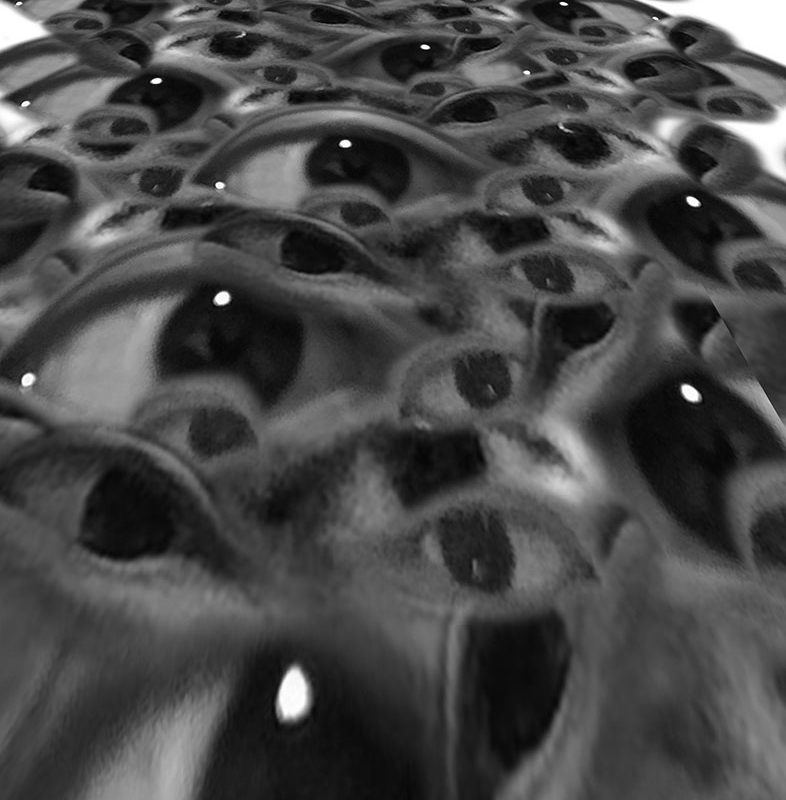 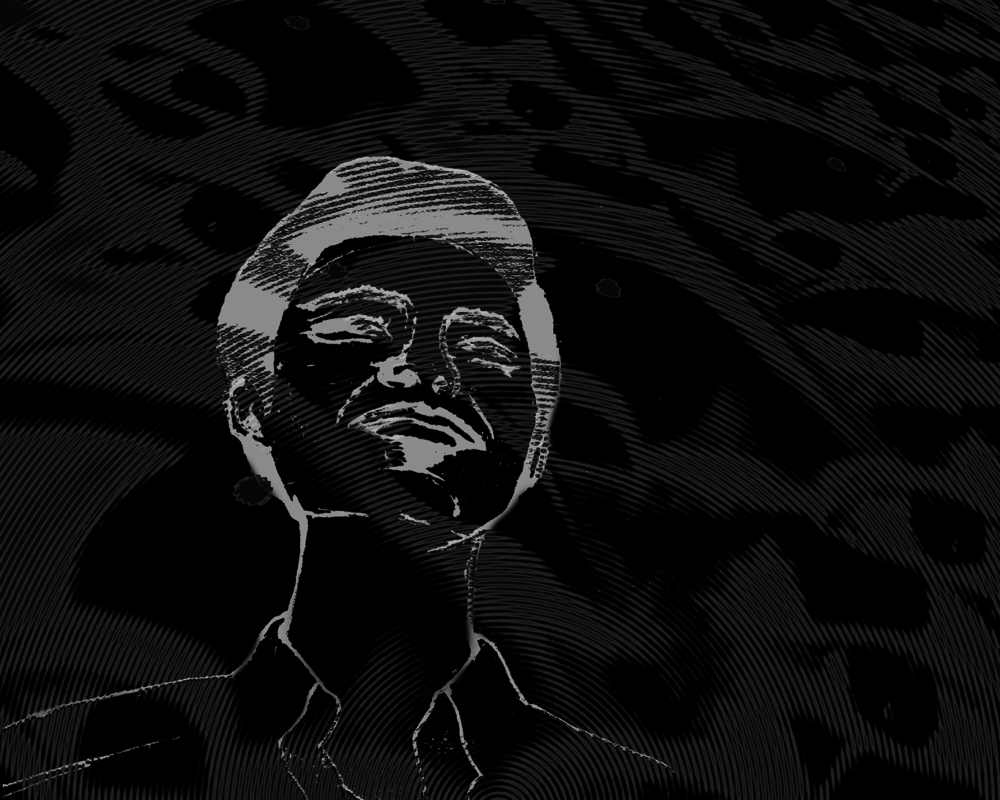 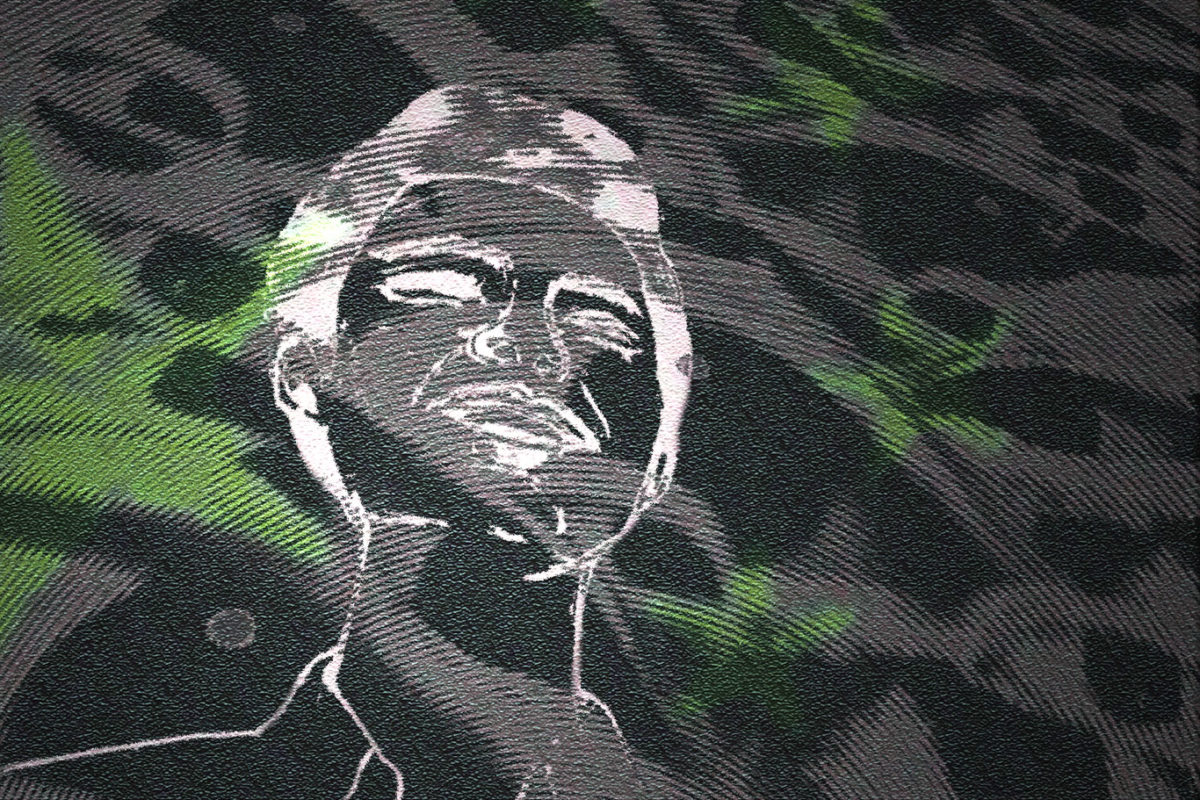 “I really enjoyed the challenge this project brought me with the task of combining traditional and digital media; I’m pretty comfortable with both forms, but I’ve never really used my skills in both for one piece.

The brainstorming process was a lot of fun though. I enjoyed sifting through the articles, and I finally decided on one called ‘Looking Through the Eyes of China’s Surveillance State,’ which discussed the overwhelming abundance of ‘almost Orwellian-like’ surveillance and borderline invasion of privacy in China.

I wanted to display the pressure of a million eyes constantly watching you (I used various angles of my own eyes for the background) as well as the rigid political nature of the country through the very stylized edits I made to my traditional media on Photoshop. I played with perspective in both traditional and digital media too; I drew my main figure from a worm’s eye view, and exaggerated it via Photoshop.” 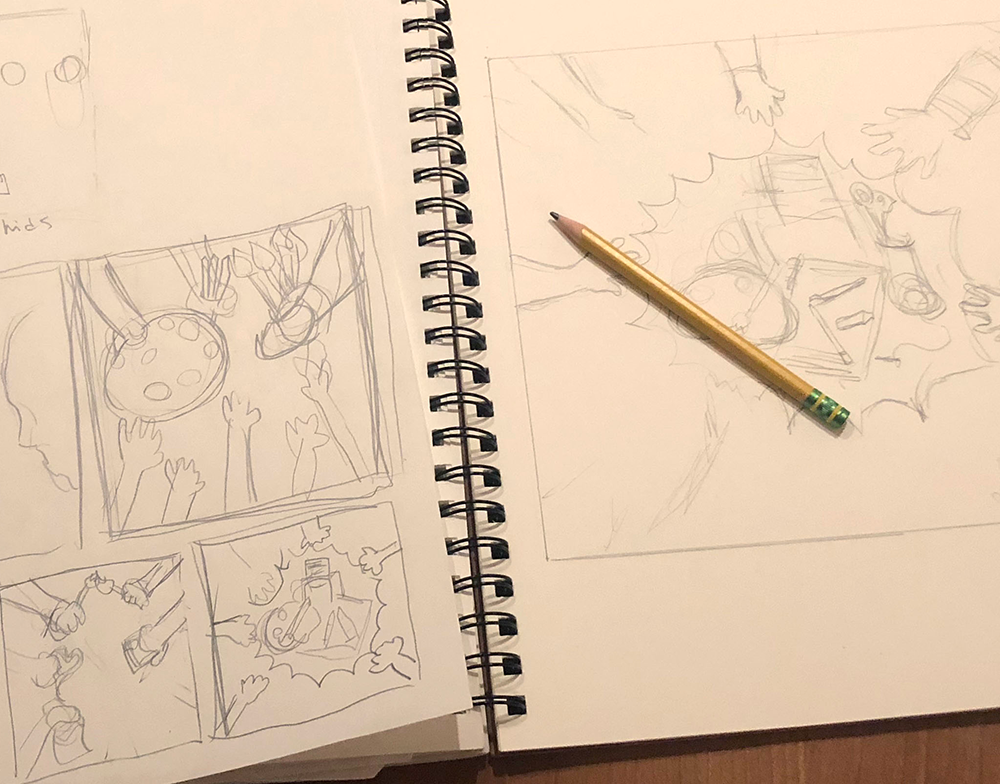 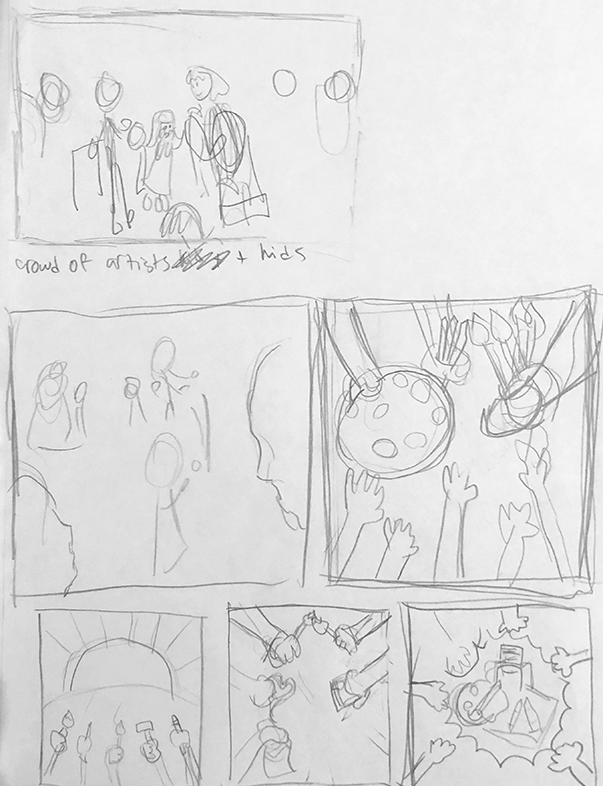 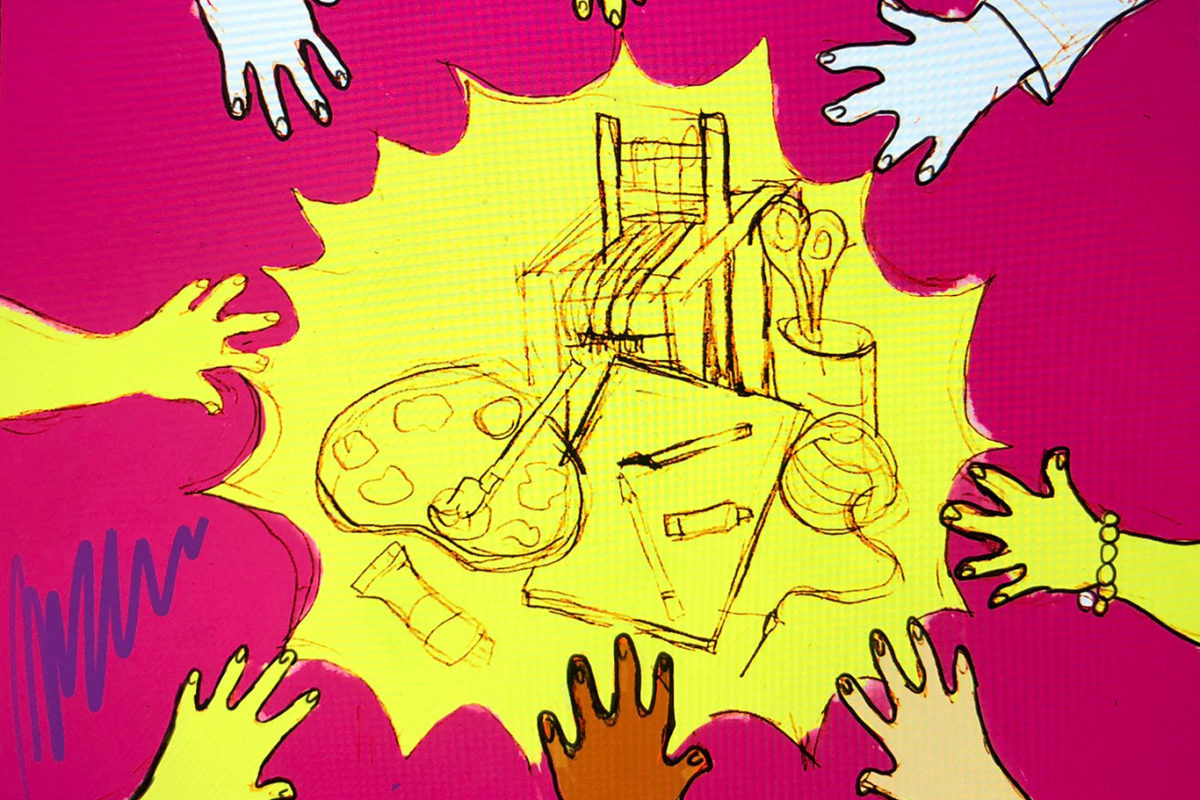 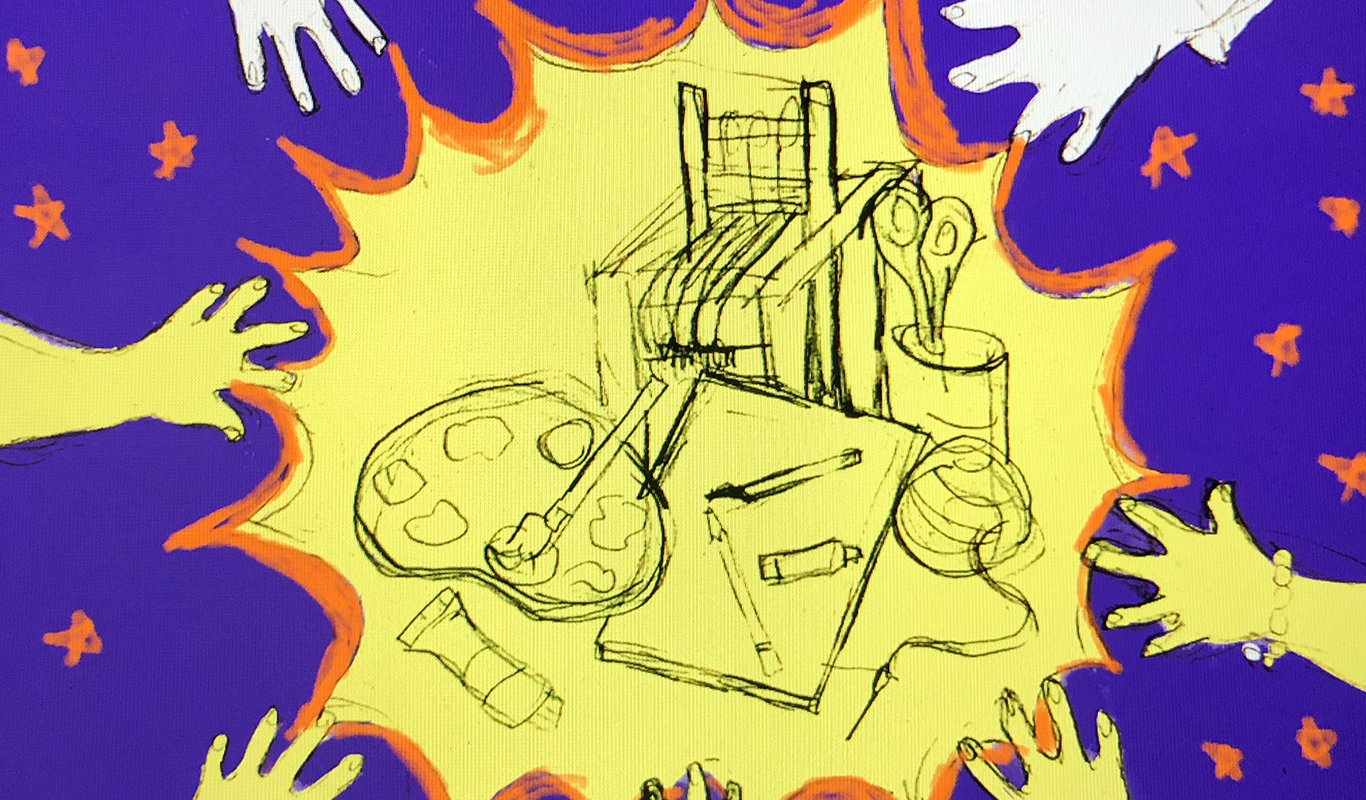 “This assignment was a challenge for me. I haven’t done many editorial illustrations because I find them to be very difficult, but I was determined to learn from this project.

I wanted to illustrate an article and found one that related to art, which I thought was perfect for Art Prof! The article , “Kids Don’t Just See Art at This Show. They Work With the Artists, Too,” was about how artists were holding art making workshops for children in museums, and I thought that would be something fun to illustrate.

Although at first I wanted to draw lots of children and artists together, I decided to go with a simpler design after a critique from my peers. I think the decision to make the design more simple and more correlated to the main part of the article, children making art, was a great idea and I’m happy that I was able to get that feedback. Although I struggled with this assignment originally, I think that there was a good end result.”