Artist Statement
“My art is my voice. My experience and beliefs inspire my works. All my artworks usually have a meaning or message behind them. I want the viewers to understand my thoughts and feelings through my artwork which is why many of my works tend to be suggestive.

Being African, I was born and raised in Ivory Coast until I moved to the United States at eight years old. It was then that I started being uncomfortable with my dark complexion, as people would say, ‘You are too dark to be pretty.’

My models are black people painted with black paint to emphasize that no one is ‘black’ in real life. Black people are shades of brown, but one can be as black as black paint and still be ‘worthy.’

‘The Complications of being Dark Skinned,’is a series of photos that I took to erase the negative stigma around dark skin. The photography focuses on black people being beautiful, unapologetic, strong, human and educated in our world.” 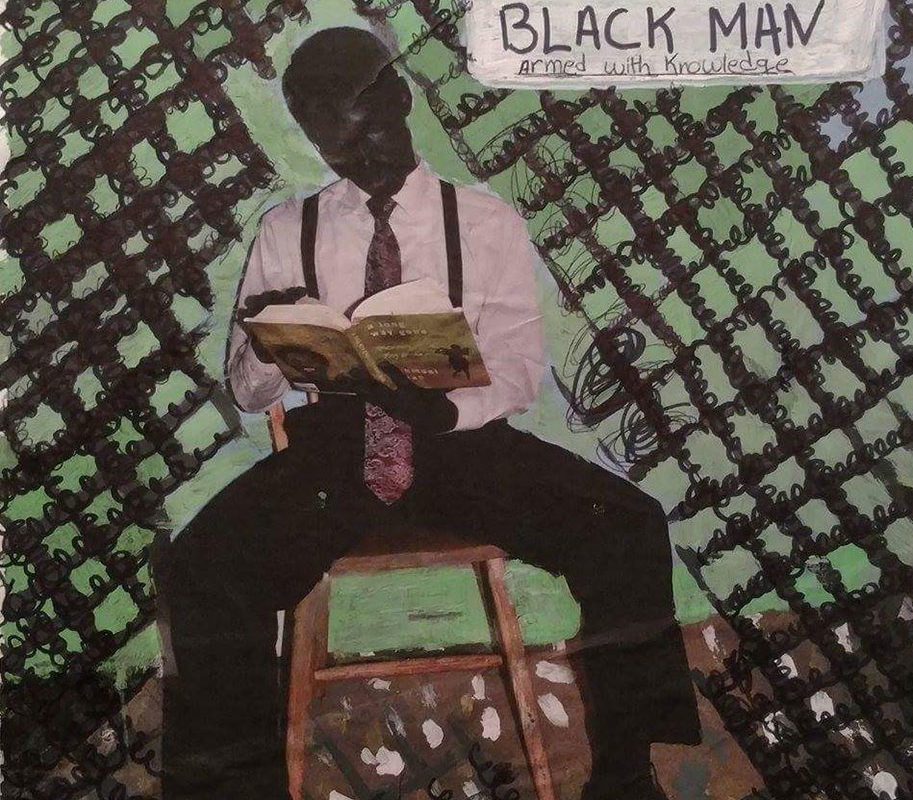 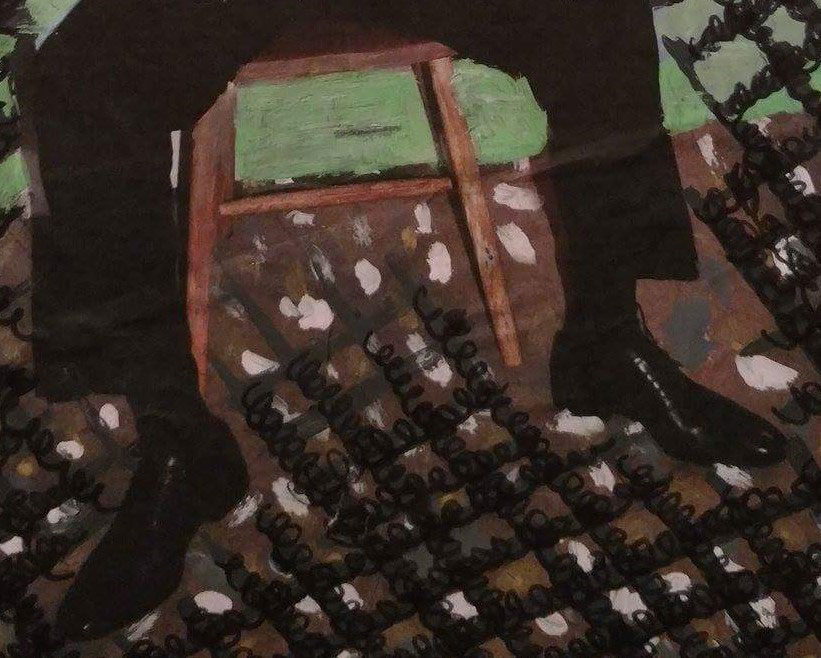 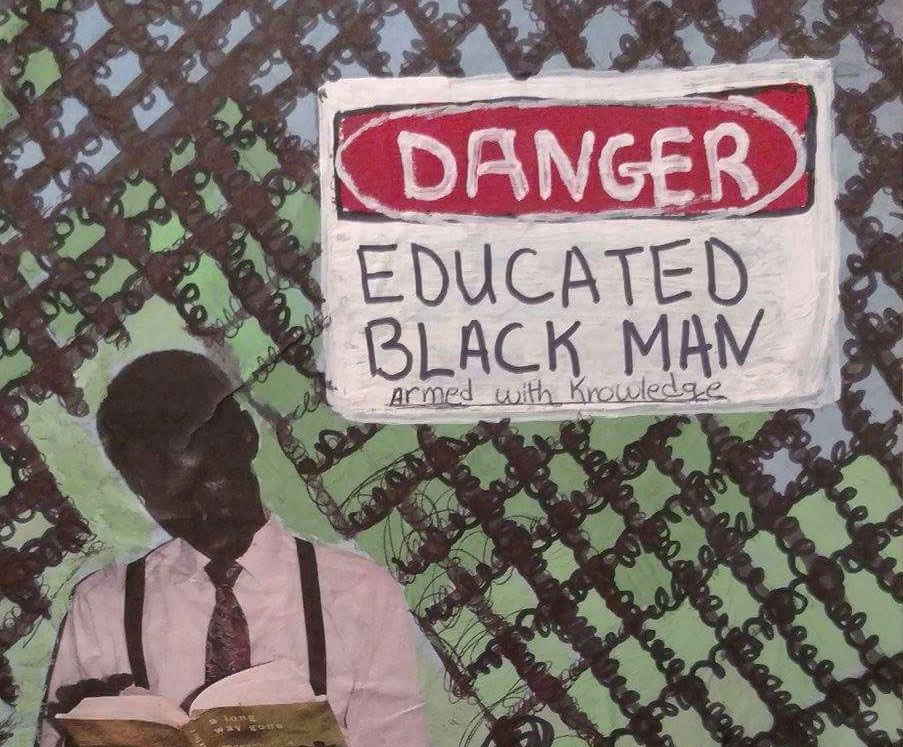 Casey: “What’s immediately impressive to me about this piece is just how ambitious it is on a technical level, and of course on a conceptual level. They’re using mixed-media and staging photographs. Using all of that to make a very personal but also political statement is, you know, it’s really incredible.”

Prof Lieu: “It’s a really charged piece. I mean, I think clearly it’s really about a lot of very difficult political issues which are very relevant. A big part of that actually is the text because I think anytime you have text in an image, I don’t know about you guys but I go right for that text. I mean, that’s just the way text is you sort of can’t help it. So I think in some ways I find myself going right to that text to sort of explain the image.”

Annelise: “I was actually kind of curious about the text myself, because I feel like it might not even be necessary. Because already with the fence, with the book, I’m kind of already getting what is going on in the piece.”

Prof Lieu: “What I think is a big part of it is the environment. I think it’s the fence. The fence really gives the figure context and there’s something sort of intimidating and upsetting about the fence.”

Casey: “Yeah the fence, because it has this very graphic quality, it has a very, like, oppressive presence in the piece and I think, actually, one thing that’s interesting about it is that there’s this sort of halo around the figure where the fence kind of disappears, and you see the grain of the background.

And so I think in a way having the sign there that says you know, ‘Danger: Educated Black Man’, that kind of undermines some of the ambiguity of the piece that could be there. I don’t think it has to be so clear-cut. I think the fact that the fence is so overwhelming but then it kind of disappears as it approaches the figure, that could complicate the matter a little bit more.

You know, that knowledge as a black man in America kind of makes you a target in a lot of ways, but at the same time it arms you with skills to further yourself and your position in the world.”

Prof Lieu: “I don’t really know if the figure is supposed to be in front of the fence, or behind the fence, or in between? Or is the fence dissolving? Or, like, the transition is a little bit awkward. Like I most wonder if it was a mistake that they meant the fence to keep going but they just didn’t do it?”

Annelise: “I was questioning as well how intentional it actually was.”

Casey: “It’s not just, like, found photography. That the artist actually staged a photo, that they painted the model, which is such an interesting kind of, I mean, obviously conceptually, and speaking to the politics of the image is really compelling in some sense, but also the fact that you’re using paint on the level of the photography but then also working back into the photo with paint.”

Prof Lieu: “If you have an image that’s already dark, why would you need to paint it black again? And so I think that very process in itself is already a statement.”

Annelise: “I think the photo as well brings up kind of the idea of history too because the subject is wearing suspenders which is not something you see nowadays. So it’s kind of bringing me back to a historical time perhaps like the civil rights movement.”

Prof Lieu: “Why do you think the book looks like a contemporary book? Is it the graphic design of it or is it the color?”

Annelise: “I think it’s the color.”

Prof Lieu: “I always look at the clothing to give me historical context and sometimes the clothing is very ambiguous other times it’s very specific to a culture or something like that, and so I think in some ways clothing provides a sense of time.

The artist has really made the figure anonymous. You don’t feel when you look at this piece that this is a very specific person that they’re highlighting, and I think that’s really really important. The artist is obviously talking about a whole group of people.”

Annelise: “And it becomes about the color instead of the actual person.”

Casey: “The body language that the model is using doesn’t feel like…it feels very specific, like there’s no specific personality to it is in conflict with the kind of symbolic content which is really interesting.