Efge
Man with an Umbrella

Artist Statement
This drawing is my first ‘full charcoal’ drawing; just a tiny piece of charcoal (a burned spindle piece) and a piece of kraft paper.

I wanted to create an atmosphere of darkness and rain, something very communicative. Without any pre-drawing, I just let my hand guide the work. The act of letting this hand do the full job alone, plugged with the mind, was magic. For me, this is the hardest thing to do for an artist, just stop thinking, splurge into your universe and fully trust your hand and mind.

Charcoal and simple paper are for me the best media for this kind of exercise. 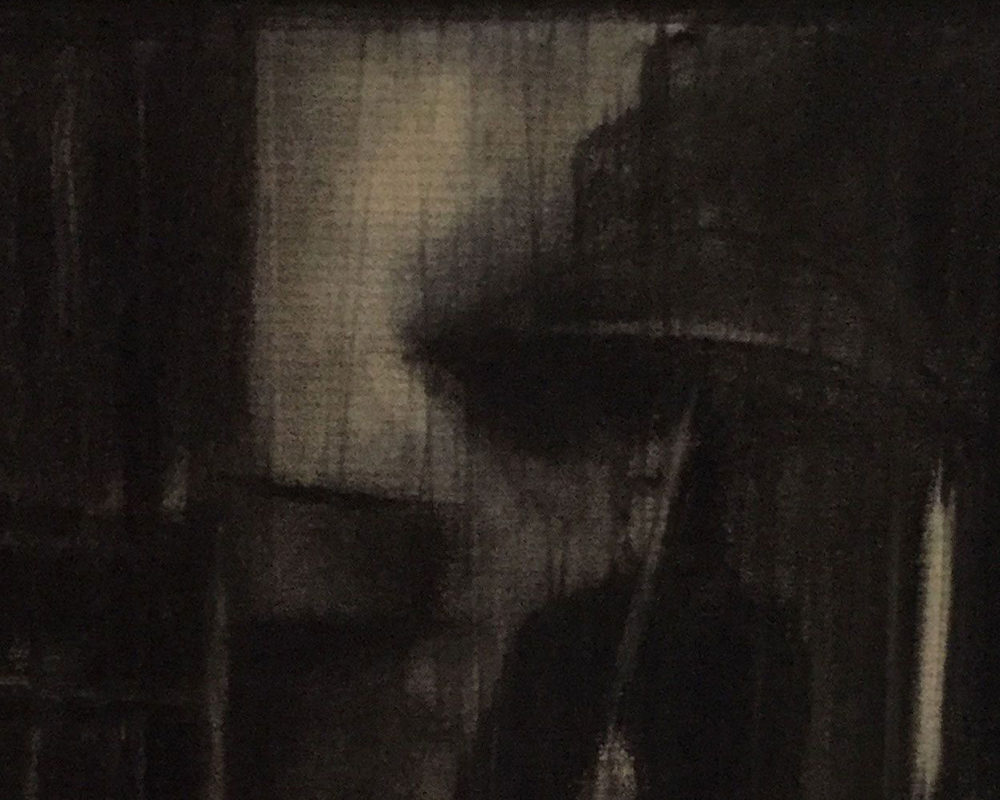 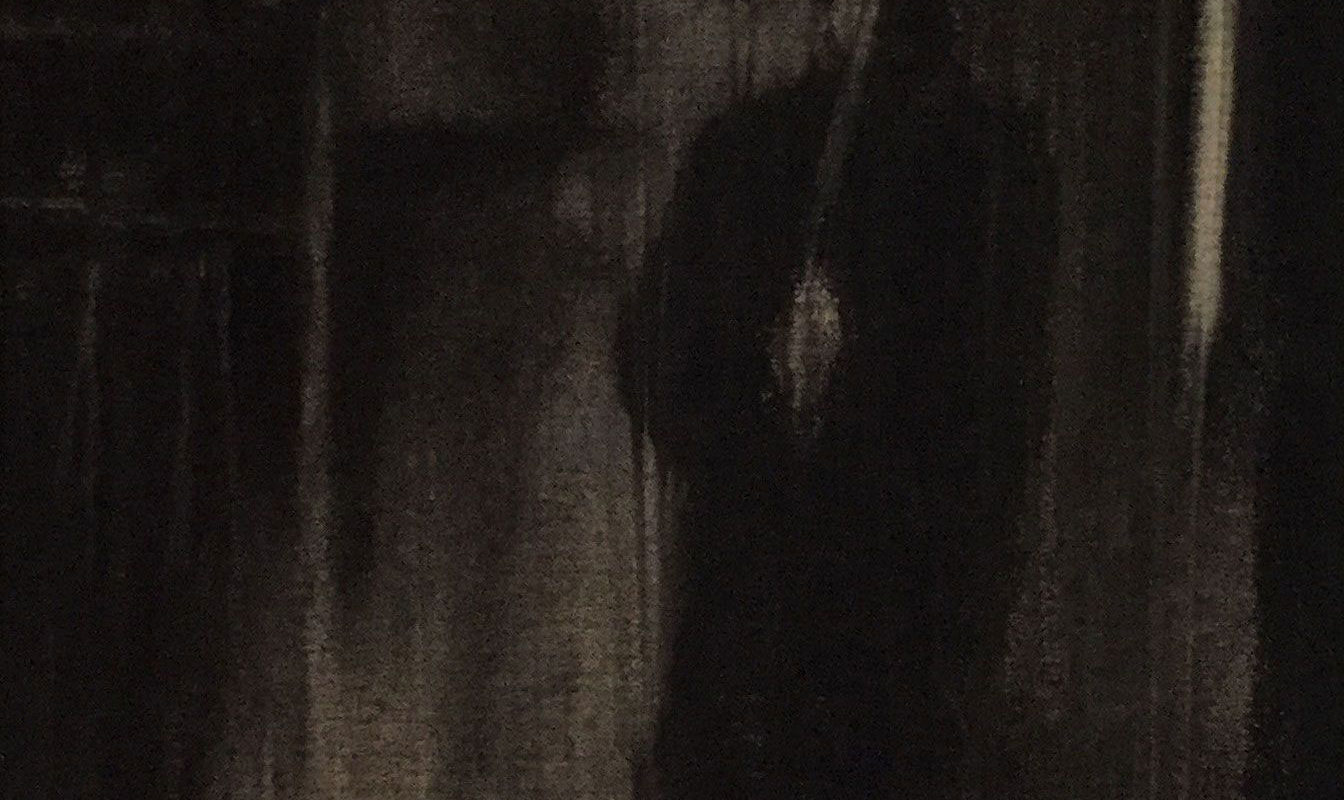 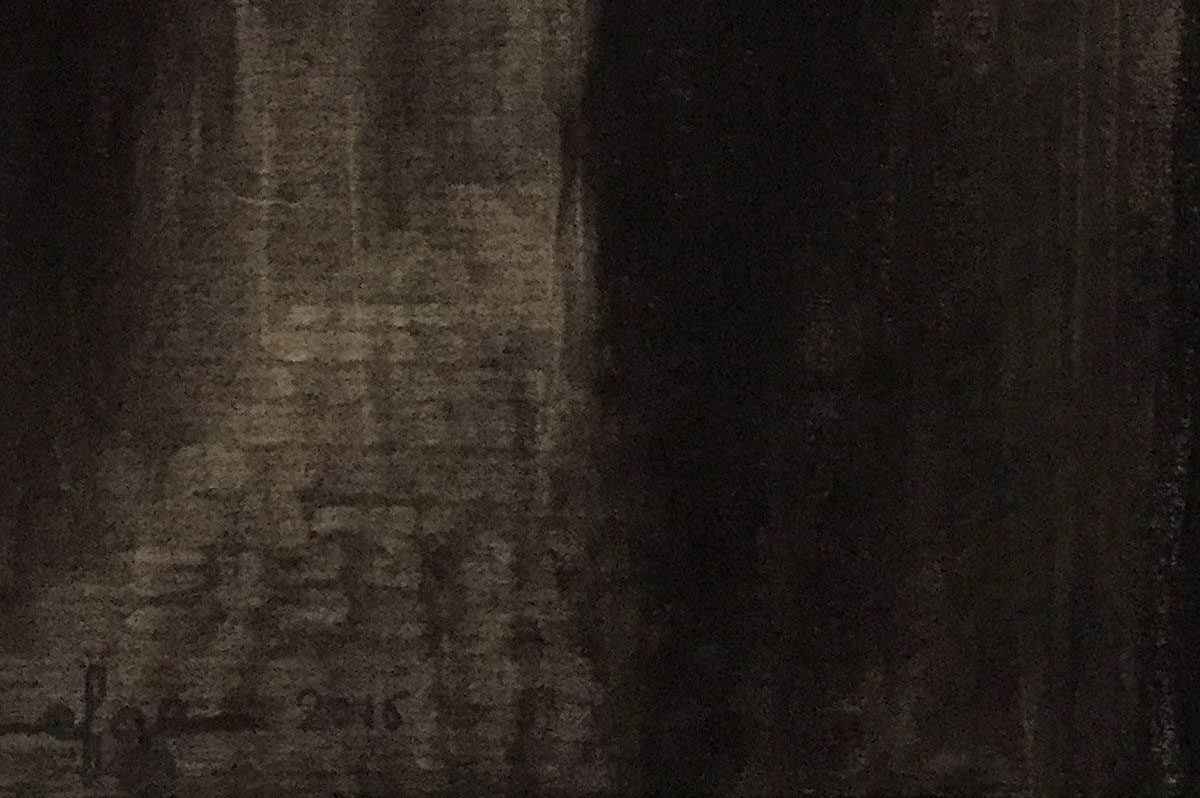 There’s very few details, I mean I feel like the most amount of description is really in the ground and you don’t really see it anywhere else.”

Lauryn: “You see it a little bit in the face in the way that it’s articulated with the shadow of the eye where the eye socket is all this is a really great example of an artist using it to the best of their advantage.”

Prof Lieu: “Well, they’re selective about where they put the detail. They’re not just putting it everywhere mindlessly, They’re just saying ‘this is the part I want my viewer to look at and I’m going to call attention to it’ so, they’ve been very efficient about that.”

Alex: “And that spontaneity that they discussed in the artist’s statement in that they said the drawing wasn’t planned beforehand made it just so free flowing and that gave it so much of that vibe and sense of beauty and delicacy, and it’s accomplishing so much without all of the frills a lot of other drawings kind of lean back on.”

Lauryn: “Yeah one thing that I also really like about this piece is that it gets so dark still, like there are such dark levels across the whole piece that my eyes feel really sensitive to any transition. Even a small transition makes me feel as if I’m out there at night or in the dark and stormy alley and my eyes are trying to adjust to the light. I have that sensation as if it’s actually happening.”

Prof Lieu: “Right, and also the black that’s throughout the entire drawing. Every area of black feels like a different black. It doesn’t feel like it does when sometimes I look at a drawing and there’s a lot of black and it looks like a black backdrop, or it’s just like a wall of black with no depth and what I really see in this charcoal drawing is I feel like I could walk all the way down that street and I feels like it’s going really, really far away and the black just feels different every time. It doesn’t feel repetitive is what I’m trying to say.”

Lauryn: “I almost feel the same way about the light except that one bar of light on the right side, and I get the sense that that light is coming from a window or something that’s inside, because it’s so strong. But, with light coming out of a window, or any place really, there is a directional quality to it and a way that it diffuses, and you don’t really see the light going anywhere, It’s just all withheld in this tiny space and that makes it feel like a solid object rather than, you know, an window or an opening into another space.”

Alex: “It has an ambiguity to it that isn’t a comfortable one. Like, everything else is entering a little vague but it creates that beautiful atmosphere and, with this one, you’re left wondering what it is and it doesn’t really allow the piece to form around it.”

Prof Lieu: “Well, also I just think it’s really harsh as everything else has this soft, dissolved transition and this almost feels like somebody stabbing you on the right hand side, like it just seems really abrupt as a highlight, so I think maybe you should tone it down. Or, you could probably even get rid of it all together.

Lauryn: “ I don’t know if I’d get rid of it altogether, because I do feel like it serves a purpose balancing the lights in the piece and I feel like if it was just black it actually would have our eyes skating off the right side of the page.”

Prof Lieu: “Yeah, maybe you would totally lose all the form on the right side of the composition.”

Lauryn: “But I do feel like if you just smudge it a little bit and maybe add a slight, slight halo around it it would make it less object-like.”

Alex: “The more specific it becomes, the better. Like, I’m looking at it and thinking if it was either clearly a window with maybe a curtain that drapes over part of it and the window bar within and really making that world believable. Or, like a Lamppost and then having below…”