Artist Statement
“This is a drawing I made for my drawing course as a mid-term assignment. The assignment is to think about my relationship with nature. For me, I think human beings are part of nature and should be closer to nature as we are now.

I come from a big city so I don’t have a lot of chance to be around nature. In this drawing, I represent myself as part of nature and I’m trapped by city. I also imply global warming and tell people that if we still separate ourselves against nature, our world can be in danger.” 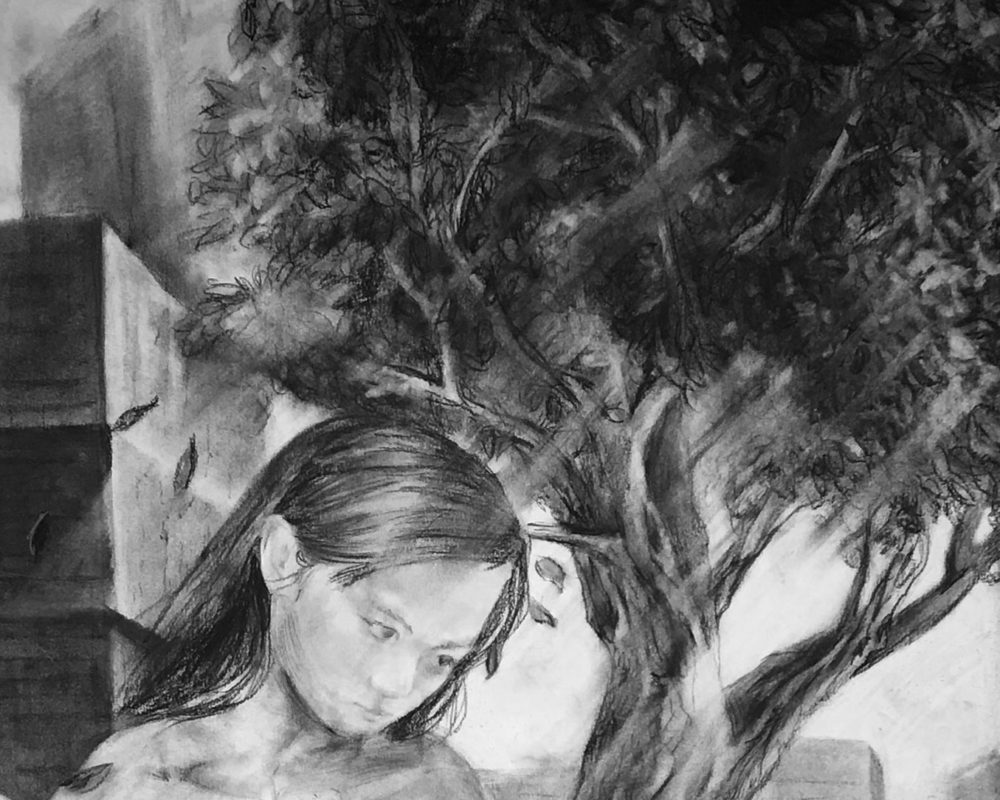 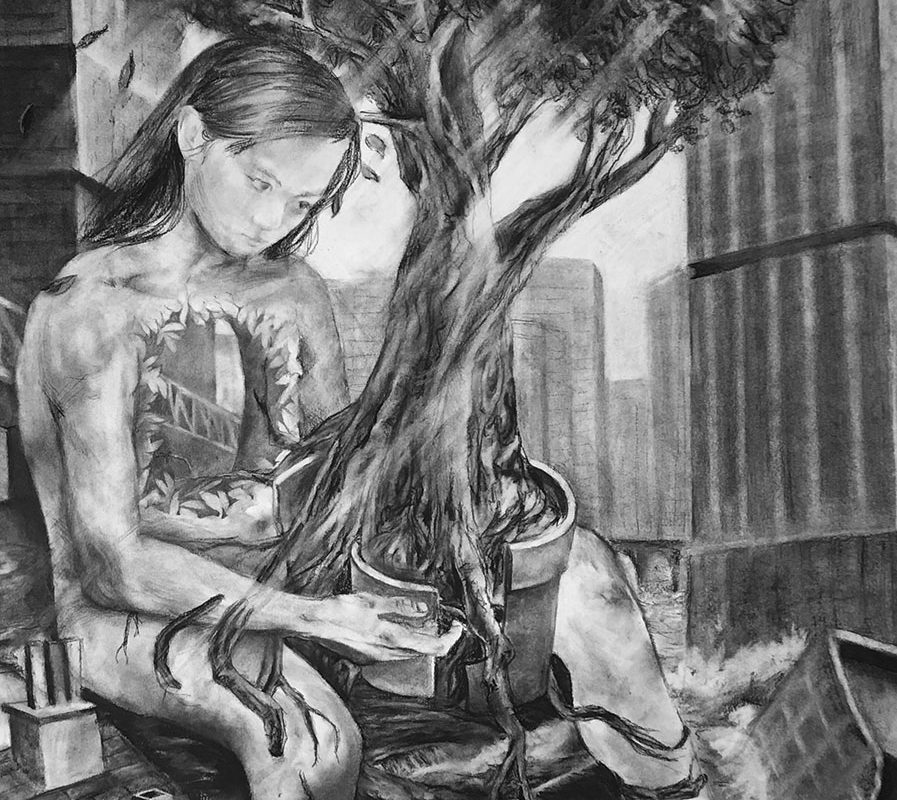 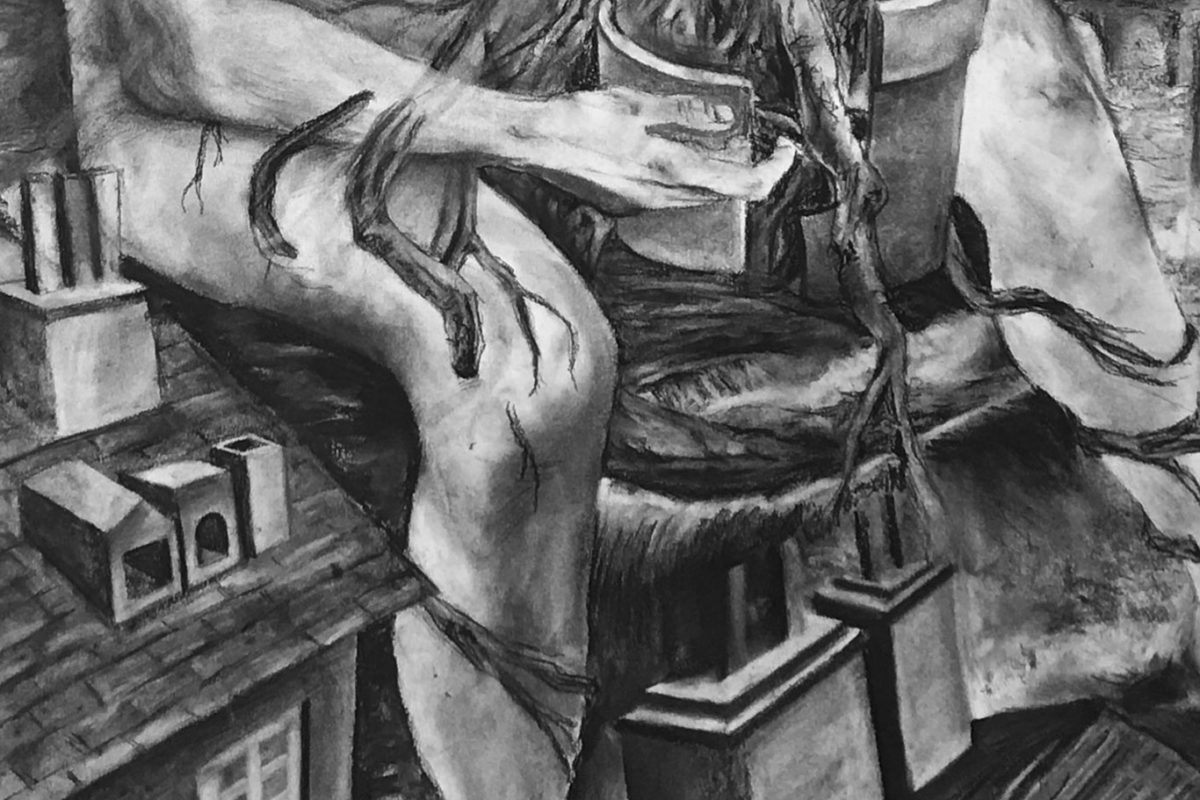 Prof Lieu: “I think this is a really ambitious drawing. First of all, there is just so many components to it- so many aspects that are interacting in so many different ways. You have the figure, you have the tree, which is obviously got this physical connection with the figure, but then there is also this amazing space of architecture and building that is surrounding all of this.That is a lot to tackle all in one image! I think in that alone, is really impressive.”

Deepti: “I am really impressed by the amount of time you can tell the artist spent on this piece, thinking about it, working on it. I think that is something to congratulate the artist on.”

Casey: “Yes, because each element of this piece feels like it has an equal amount of attention paid to it. The tree is really well rendered, also just the elements of the figure and the different buildings. Everything has its own textures, and that is really exciting to see.”

It has this really nice visual contrast in terms of the use of the charcoal in articulating the means of those textures. “

Deepti: “I am really enjoying the use of space in this piece as well. I think the artist is also taking a lot of time to think of the depth, and how to convey depth with focus.”

Prof Lieu: “The plant seems so aggressive, it seems like it is digging deep into the figure. I think in some ways, that is kind of contradictory to the artist statement, which talks about humankind being closer to nature and having a better relationship. I kind of feel like the opposite is happening in this piece.”

Casey: “I think one of the strengths of this piece is it does have one of these great senses of mood and tone. It feels almost like they were trying too hard to be dark and have these disturbing qualities. So there is like the hole through the figure’s chest, the tree going into the leg.”

Prof Lieu: “But not only that, the fact that the plant has broken the pot it is sitting in. That seems especially aggressive, I mean that is not usually something plants typically do. You really feel like the plant is not just an ordinary plant, but that it is more of a metaphor, that it is like a parasite kind of attacking that figure.

I guess another thing that I find a little bit confusing too is that the figures facial expression seems so nonchalant and calm in a way, which I don’t really understand given that the tree is so aggressive.”

Deepti: “Yeah, they also don’t really seem to be one. It seems like the tree is really aggressive and the figure is really passive, almost letting the tree win over or something like that. There seems to be a huge conflict between the two objects or figures.”

Prof Lieu: “Artist statements are so hard to write! I don’t know if you guys have written one in a while, but they are really challenging because I think often times you read the artist statement and it says one thing, and then you look at the image and feel that there isn’t much connection between it. I certainly think the drawing is about humans and nature- that comes across- it’’s just that the relationship is quite different than what is described in the artist statement.

In the artist statement, they all mention global warming- which I think is just a whole other tangent that is not really related. What I see a lot in student work is that people try and pack too many things into a single drawing. What I mean is, global warming, you could spend a whole decade making work on that, because it is such a big topic.

I guess what I would recommend is getting more specific, because even humans in nature is a little too broad- I think it needs to get a lot more specific than that.”