Artist Statement
“This illustration is a commentary on the corrupt dairy industry in the United States. The large man holding the tubes represents the corporate giants forcing cows to produce milk. These large corporations take advantage of small farms, lobby to create a false demand for milk, and, in some cases, promote the exploitation of cows. “ 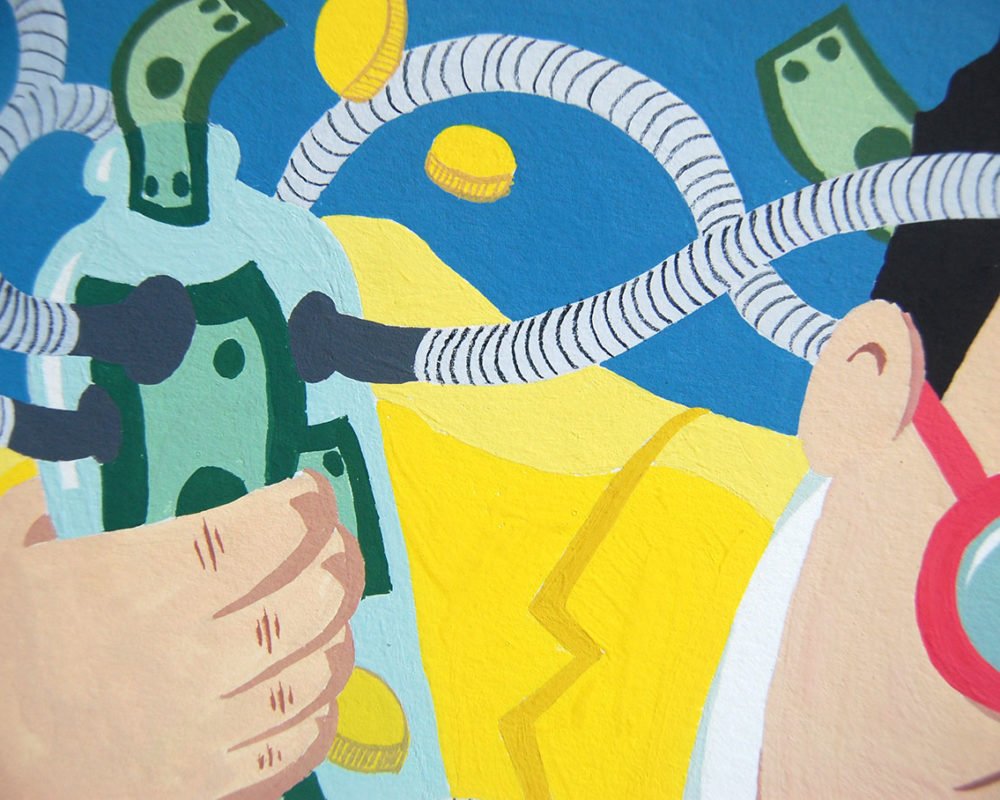 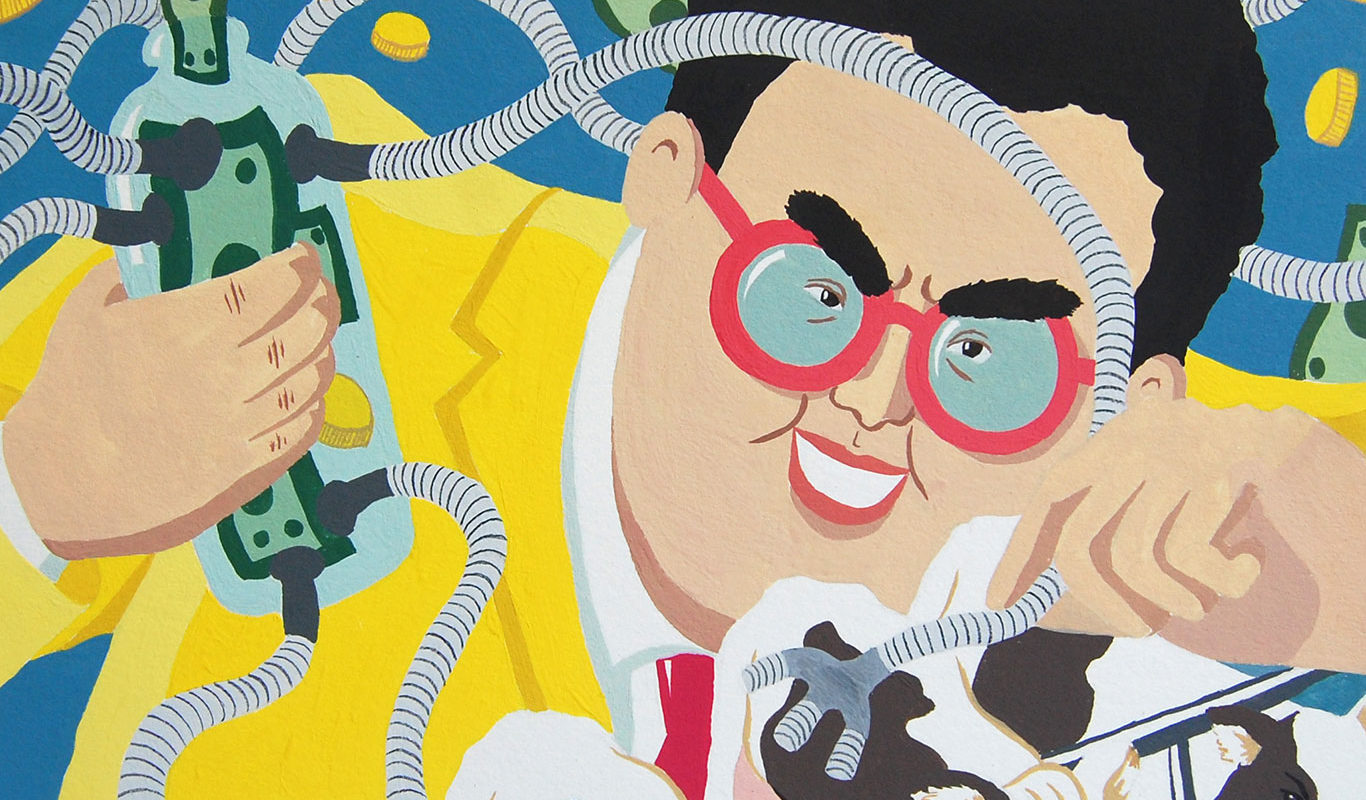 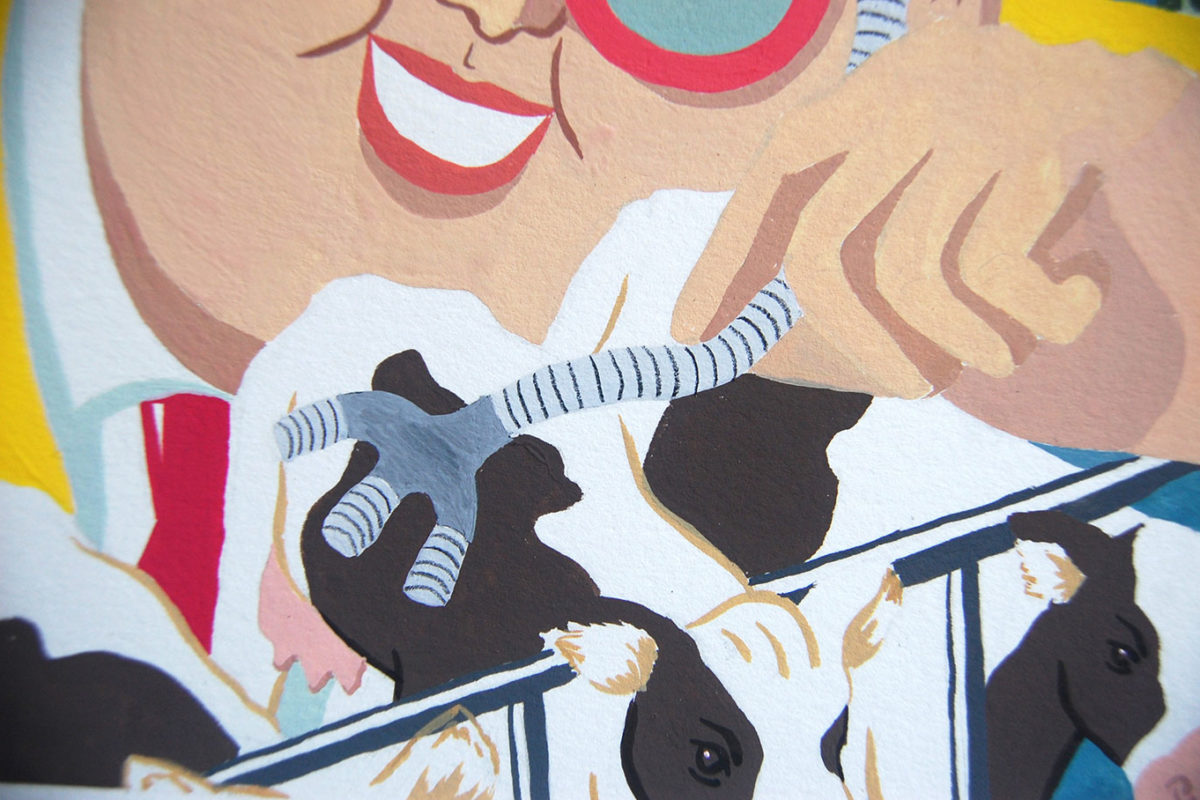 Prof Lieu: “This is a gouache painting that I think really grabs your attention right off the bat. It’s one of those pieces if you walked into the room, you would walk straight for this piece. I think part of it is the incredibly bright, saturated colors. But also there’s so much movement. The way that all the different components of the piece are dispersed throughout, I think is really well done.”

Lauryn: “I think at times it almost feels too distinctive. Like immediately when I looked at the image, I thought that this guy in the yellow suit was that guy from that Gangam style video that came out a few years ago.”

Prof Lieu: “Do you like that or do you think that’s problematic? I hear that a lot of people will say, ‘Oh that reminds me of this’.”

Prof Lieu: “You felt like it was a distraction, that you made that association.”

Yves-Olivier: “My issue with the yellow suit is that it doesn’t really convey the mood that the artist talked about in their artist’s statement. And this is also another issue that we have to contend between, you know, presenting a work of art on its own versus later explaining it. The vibrancy of the colors does not convey the despondency that the artist is talking about in their statement.

The artist is talking about the abuse of cows and the dairy industry, and how the conglomeration of corporations are taking advantage of these animals. This bright bright yellow on this sky-blue backdrop isn’t really doing that for me.”

Prof Lieu: “Well it’s a playful image. It’s a fun, almost happy. I mean, although he looks like he’s up to no good, but in a mischievous way. I don’t think in a dark sinister way that way the image is described in the statement.”

Yves-Olivier: “In a kind of a comical way.”

Prof Lieu: “I mean, there’s a light heartedness I think to the stylistic choices in this painting that for me don’t align with the statement. I mean, if you think about the abuse in the milk industry, it’s pretty severe and very serious.

Someone who comes to mind immediately is the artist Sue Coe, who’s done many many images about the chicken industry, the meat industry, various corporations. I mean she’s really somebody who’s dug very deep into that. If you look at her pieces they’re very stark, very severe, brutal images. And I just don’t think that that’s being conveyed here very much.”

Yves-Olivier: “The main focus is on the man holding this money machine. And I think the artist in their statement put an emphasis on, you know, these cows that are being abused. But they’re kind of off to the side and it’s not really clear what the relationship is between this man and the cows.”

Lauryn: “Well one thing that I had a hard time in relation to that was the actual machine that he’s using with the cows. Like I couldn’t quite figure out what that was. It kind of looked like a ventilation tube.”

Prof Lieu: “I thought it looked like a vacuum cleaner.”

Lauryn: “Yeah. And so trying to figure out. That seems like the umbilical cord to the cow content…”

Yves-Olivier: “But it doesn’t look like an industrial cow milker, which has metallic tubes attached to the udders.”

Prof Lieu: “I mean, that’s where you have to do your research as an artist. If you’re gonna do something about the milk industry, you gotta look up photographs of what those machines look like. What the factories look like,and really understand the ins-and-outs of the industry.”

Donate to keep Art Prof free for all!