Artist Statement
“I am actively working hard at achieving and embracing my own personal style. I have a goal of achieving this by years end. It is through a painstaking and effort driven mind set for which I hope to accomplish this.

This piece I am presenting is representing culture. The ‘Missing Link’ is where we all are born of, fractionalizing culture, allowing us to see that we are all of ONE.” 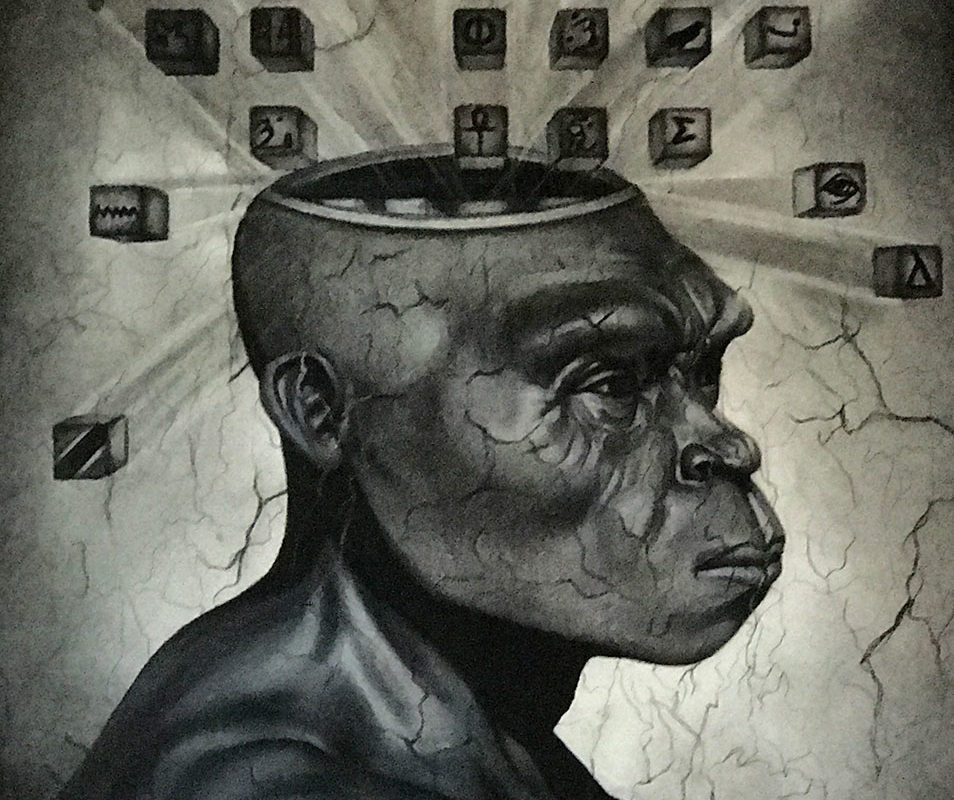 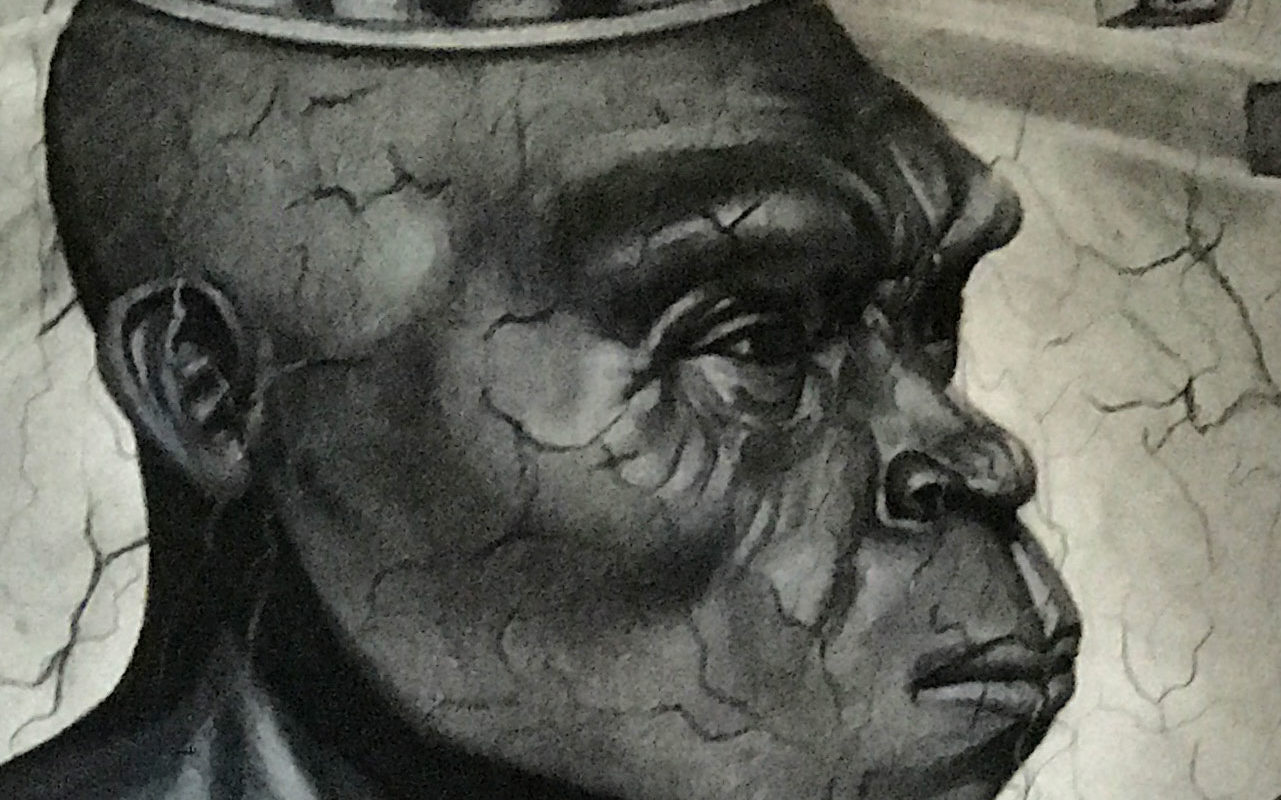 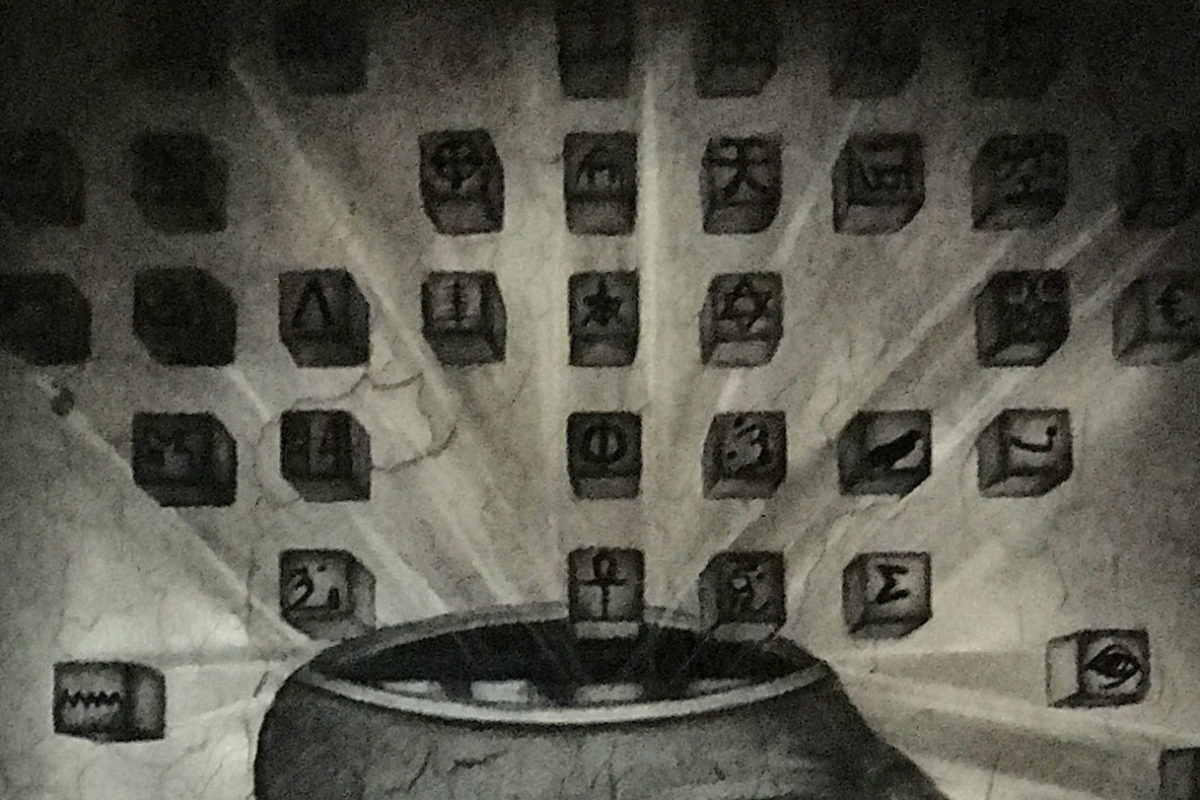 Prof Lieu: This piece seems really heavily loaded. There’s a lot of symbols in it. There’s the image of the early human on the bottom, and I’m wondering how the two of you interpret all those symbols and imagery together. How is it coming across to you as an image?

Deepti: I’m understanding that there are a lot of cultures represented through these, like, cube formations that are coming out of the head of this figure and it seems like because it’s an early human, maybe it has to do something with like evolution or progression of time.

Alex: Yeah, I pick up the same kind of vibe and its subject from it but I think it’s almost not doing it as effectively as it could be. Like, you see all the different symbols and it’s like, alright you’ve got these different, obviously they’re trying to hit at like, the different parts of the world all rooting in, but I think that the technique being really impressive.

I kind of want a stronger presence for the concept as well, like I think that they’re hitting on is such, I mean, it’s a massive concept, you know. Like, how all of humanity is really one and really connected, and I think that they need to push this idea like a little bit further. Like, they definitely put work into the idea but more work into the technique.

Prof Lieu: Well, I mean, do you think that the subject matter is too big? Do you think they need to narrow it down and be more specific? Because I guess, whenever I work with students on more independently driven projects, I’m always pushing them to whittle it down to the smaller, more focused viewpoint.

Like, I remember one time, I was supervising an independent study student, I said ‘Okay, what’s your project about,’ and she said ‘20th century themes.’ I was like, “You may want to narrow it down a little bit.’ So do you think it’s an issue of trying to cover too much in one image or is it the execution of the image that’s doing it?

Deepti: I think that where I find myself a little confused is what exactly this person is trying to say about the idea of evolution or whatever a subject matter that you know, they are trying to tackle? These cubes kind of coming out or going into the head isn’t really clear for me, or/and what that exactly represents? I think there are a lot of like, question marks, in how the technique in composition kind of speaks to the idea behind the piece as a whole.

Alex: The artist has to choose between which direction they want to go with this piece, either like a learning piece or a, let’s call a portfolio piece, like a final one you’re ready and proud to show without issues like this. As a student, essentially doing the same thing like 20th century themes like, you know, try to bite off these huge, big things like, I mean, you see it all the time for like early student work.

They put in a lot of time and energy, it’s like ‘Oh, my theme is on death, it’s on mortality, it’s on these big issues.’ And those are the ones when you learn a lot because you’re trying to encompass so much into one piece, but if they do want to make a piece that doesn’t have these thematic issues and problems, then yeah, maybe narrowing down is the answer. But I would support them kind of, driving forward with this theme that almost philosophically you know that you’re not going to be able to accurately convey, so then you have to try really hard. You have to really push that.

Prof Lieu: Well, I just wonder in the artist statement because they talk about that we are all one. I wonder if that’s oversimplifying a very complex idea because obviously, the world is a very complicated place, there’s all these many many cultures, all these different types of people and for me, I sort of have a problem with the fundamental premise of the piece because I don’t think it’s that simple. I think that there are so many issues with so many different things that I feel like they’re sort of, skimming the surface.