Artist Statement
“The drawing is about the changing faces on the Tube one station turning into another, one day into the next month,  into the next year, seeing an endless closeup of people, but never meeting any of them so they are all never brought into focus.

The process is done by sketching people on the tube quickly with pen, and then copying these separate images on top of each other using different colors form cool to warm so the layers are visible, but indistinguishable.” 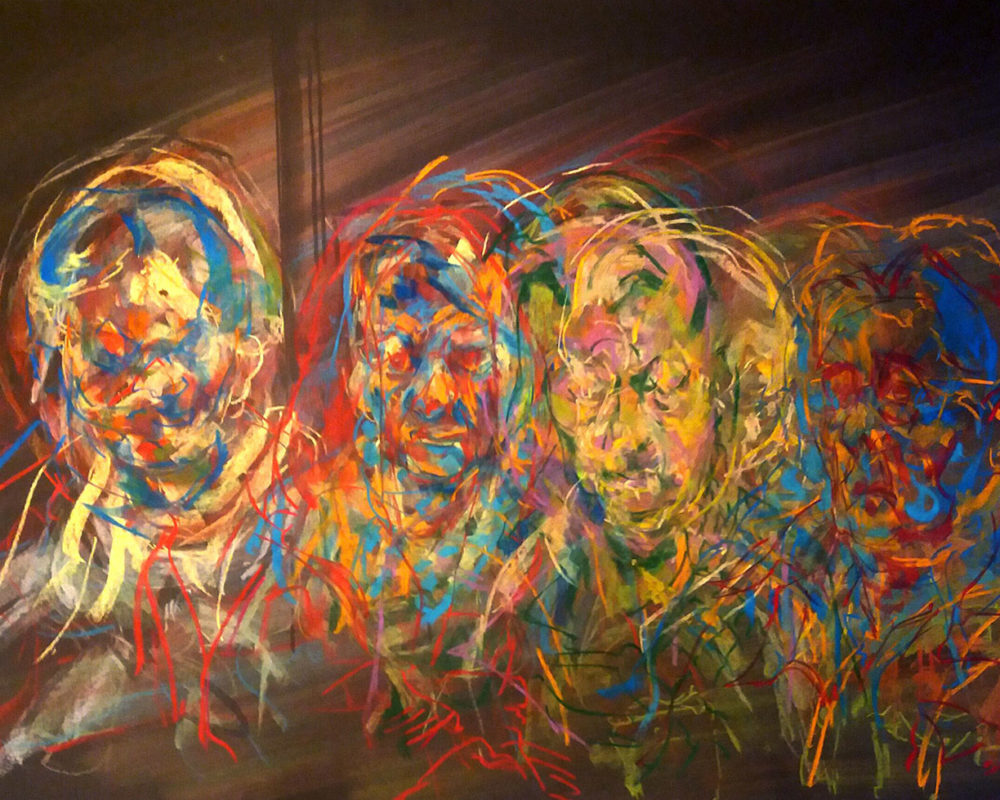 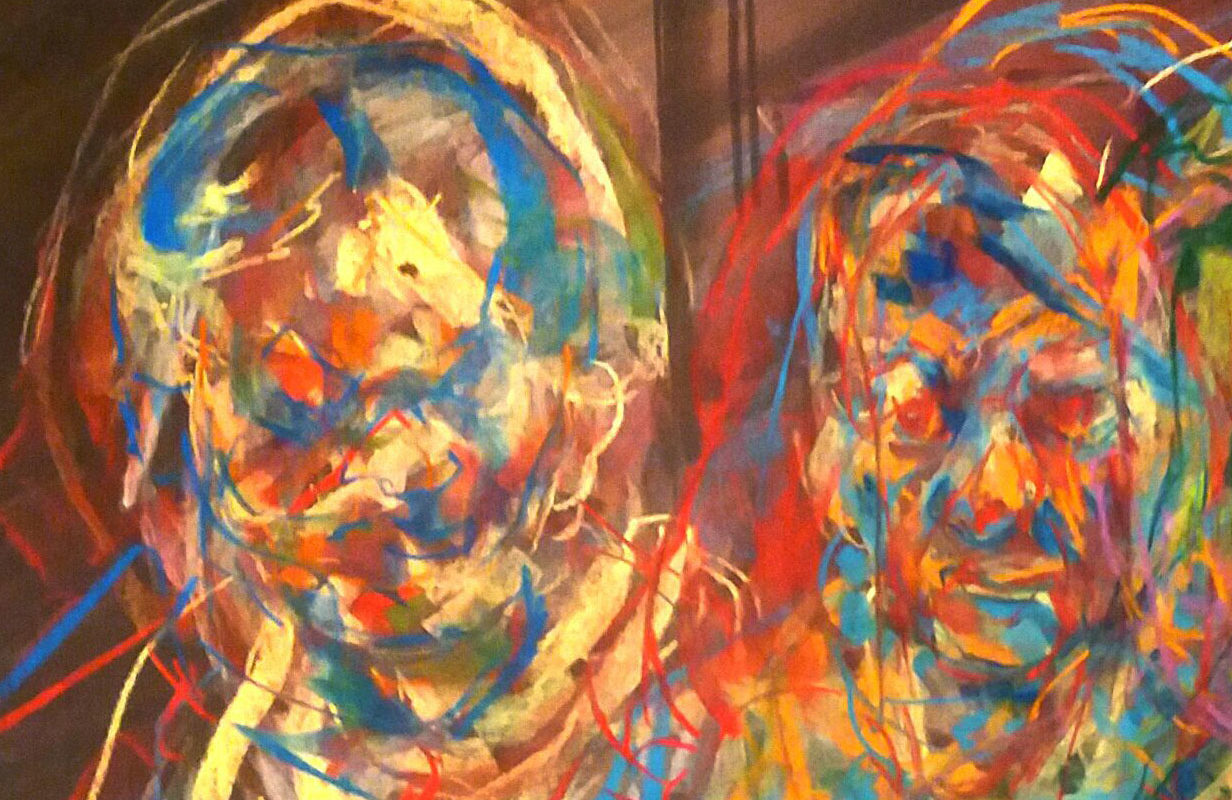 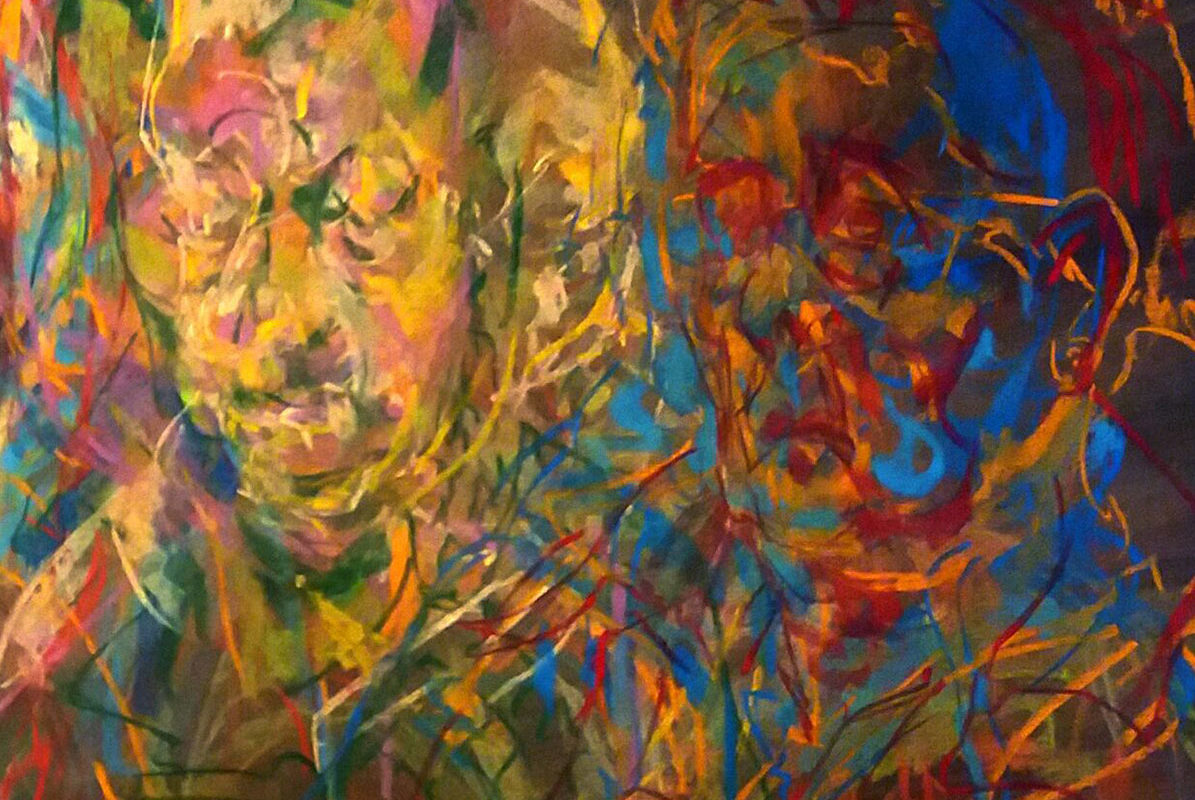 Prof Lieu: “What I really like about this piece is that there’s so much energy in it. I feel like in the center area in particular it seems like this really busy, rushed, packed group of people, and a lot of that is really in the mark making, because the way that the artist is putting in these really super, kind of aggressive strokes with the pastel really shows that movement really beautifully.”

Casey: “Yeah i think they’re really taking good advantage of the pastel in just getting different kinds of marks and using the side of the pastel in addition to the point, and I think that really shows that there’s an energy to this and it feels really spontaneous.”

Deepti: “I love the immediacy of the strokes and the variety of the strokes. I’m also loving the ambiguity of the figures along with these subtle hints where I can see some facial structure or some identification of who this person is but then that slowly disappears because of the layering.”

Prof Lieu: “Well, what I think is neat about the figures is that they are suggestive, like, for example, I see a lot of drawings where people really feel obligated to draw every single eyelash on the face, and a lot of times you don’t need that.

Sometimes, you just need to subtly suggest that, and that’s what I really like about these portraits is that we don’t see every single detail, it seems like it’s really more about the movement of the figures and less about the specific body parts and I really like that anonymity.

I mean, the other thing that I think is really impressive about this artist’s process is, first of all, they’re actually on the subway when they make the sketches. They’re not going online and downloading photos of the London Tube and then copying from those photographs, which I think a lot of people would do.

This artist is actually on the subway, they’re actually observing the movements of these people and then they’re going home and doing these sketches from those sketches and I think that’s really fantastic because I just feel like, with everybody, their default reaction to getting imagery is to go online on the internet and print out some photographs that have nothing to do with them, and then copy that, and I rarely see people who are making that effort to really go into the environment that they want to talk about.”

Casey: “Yeah, I mean I think that’s why you don’t have that hyper detailed look that can feel very stiff, it’s because this person went out and compiled these sketches and you don’t have much time when you’re sketching a stranger.”

Prof Lieu: “No, you don’t, sometimes it’s like a minute and then they’ve moved on, but that’s what’s really great about it.

Deepti: “I’m mainly interested in the composition of this piece, because there is a lot happening in the center and I’m missing a lot of that action in the bottom and top edges.”

Deepti: “And I also think that, in the center, the artist is paying so much attention to color and the variety of color which is really drawing us, as viewers, into the center of the piece, and I think it’s lacking a little bit in the spaces that we were talking about.”

Casey: “The very top and the very bottom of this canvas isn’t really being engaged at all and I definitely think that there has to be some way to break that up.”

Prof Lieu: “I mean, I actually think it’s a little strange that all the figures are the exact same height, because if you were in a Subway situation not everyone’s going to be the same height. I mean, that’s pretty much guaranteed, and so that’s the one thing that kind of makes me question the environment of that.