Artist Statement
“I am a high school art student from Massachusetts. I have a particular artistic interest in human anatomy. The beauty of body language has captivated me, and flown into my work. What moods can bodies portray, simply through a pose? How can the form of a figure be accentuated to enhance those moods, and make a statement about a story the bodies are trying to tell?

Personalities are often determined from what people say. My goal, however, is to create personalities through form and sculpture, and finalize them through surface design.

Ceramic sculpture can be a long and sometimes unpredictable process, so it allows me a lot of time to think about my concepts, collaborate with my teachers and peers, and figure out how I can communicate my ideas in better ways. Though a lot of my time in the studio is spent alone, I’ve found the art community, (especially the ceramics community) to be extremely supportive, interesting, and constantly full of ideas.

In the future, I can’t wait to take my ideas to college, where I am majoring in architecture. Hopefully my love for structure will help me design, and maybe even build successful and sculptural buildings in the future.” 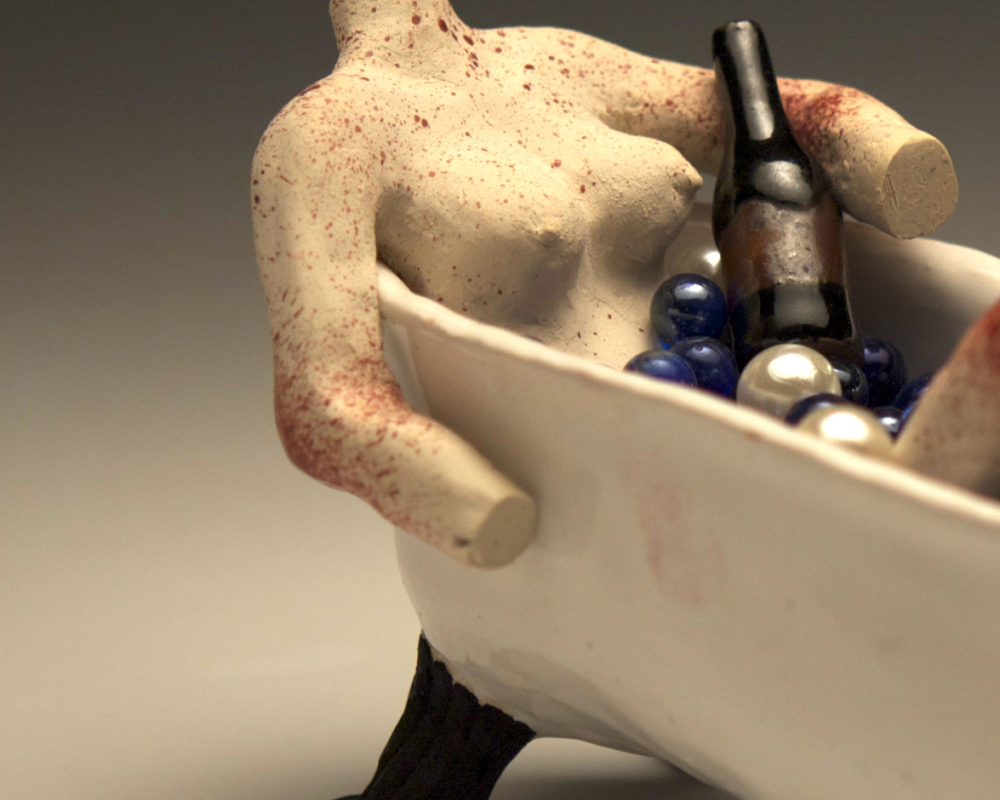 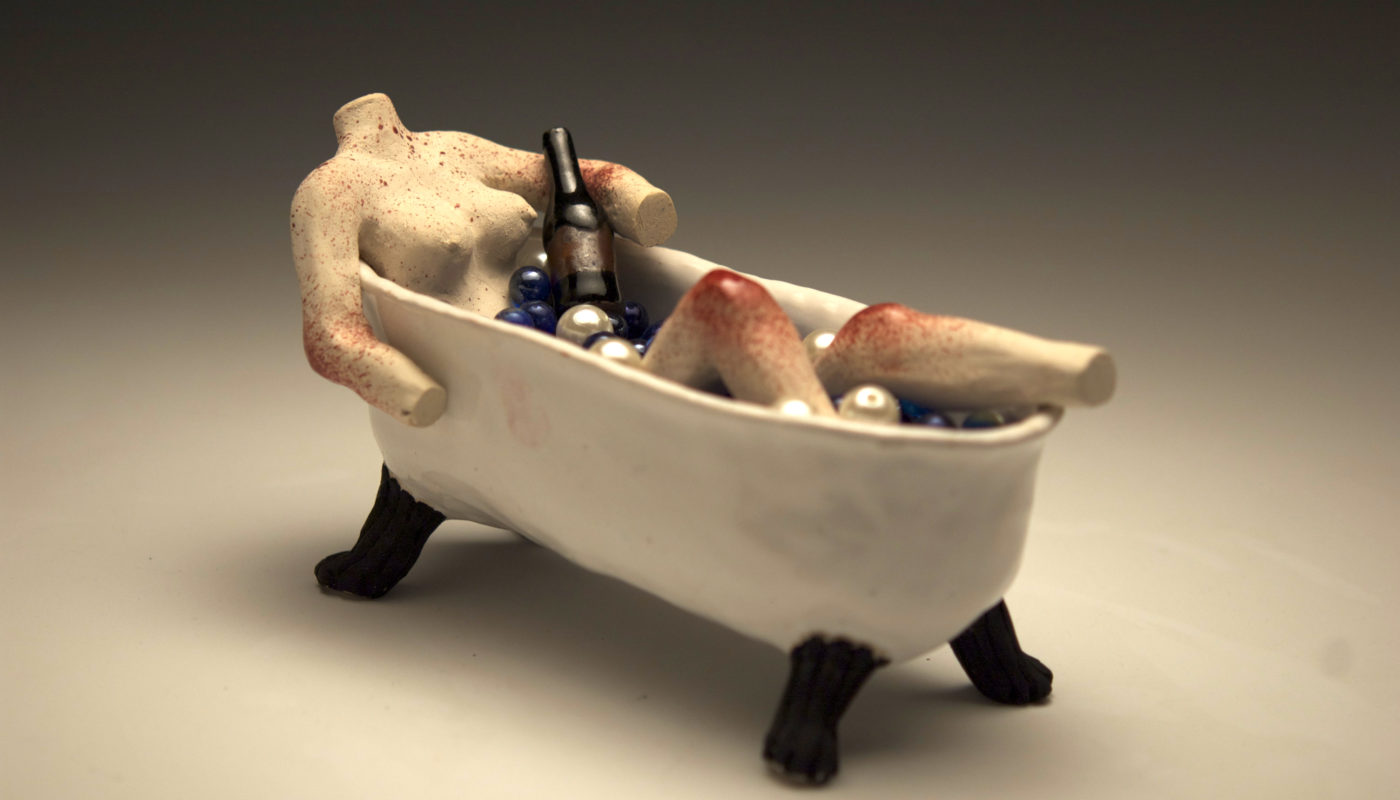 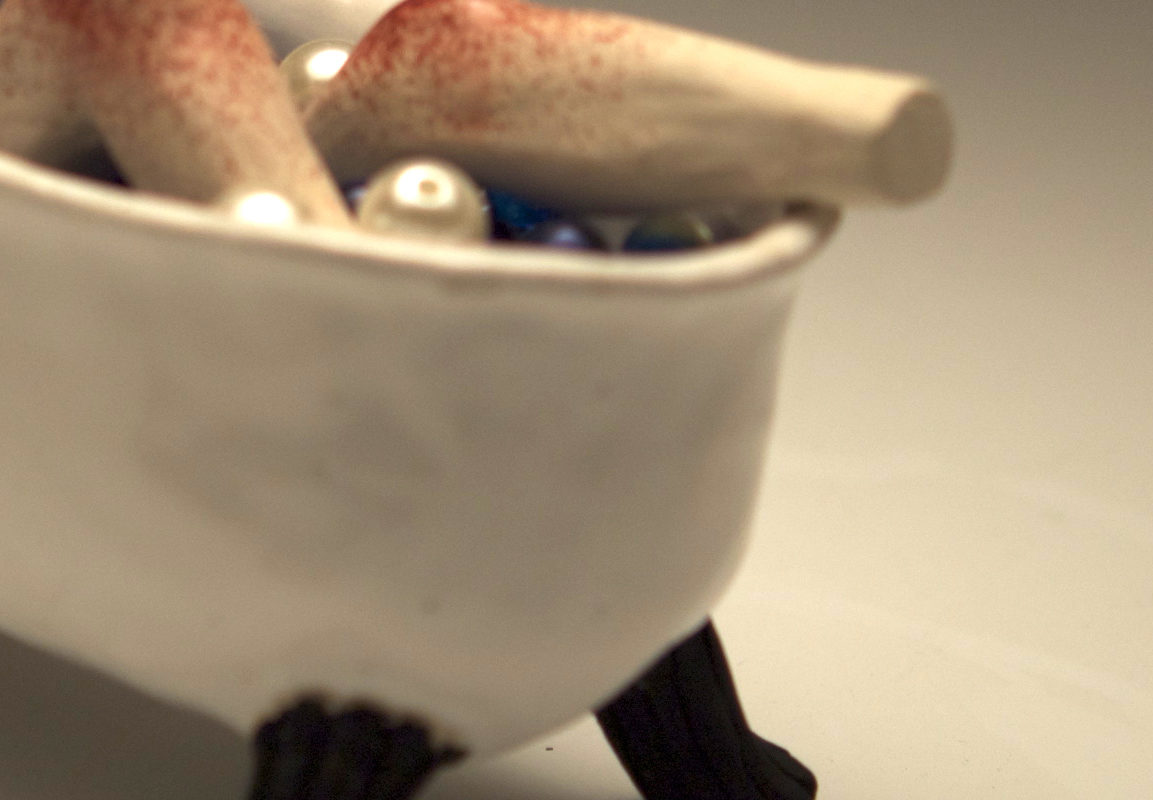 Lucy: “Hi! I’m Lucy. I’m a high school student. I come from a school with a really good ceramics program, but a lot of it is focused in wheel working and I really identify as a sculptor and mixed-media 3d artist. So when I first started classes there I decided to take a different turn and do sculpture! Instead of focusing in the wheel working classes I skipped up in started sculpture classes and I’ve been there ever since and I love it so much.

This piece was actually inspired by a real person. I love doing work on personalities and sort of inspired from real people, so this is inspired from a woman I met. She had been suffering from really crippling depression for a lot of her life and just found that life and some days would leave her feeling just really beat up and like she couldn’t really do anything.

She also told me that the way she liked to unwind was in a bath at the end of a long day with a bottle of wine and I kind of thought that was pretty funny and it really inspired me to make this sculpture. It’s partially clay and partially other materials. I made the bathtub and her figure out of stoneware that was low temp fired with glaze. I painted the black on the feet of the bathtub and the water is made of mixed beads and pearls.

There were a couple challenges making this. Starting with the figure I actually made it in separate pieces, so underneath this water she’s actually in a couple of different pieces instead of being all one just for efficiency purposes. I got a lot of mixed reactions from this piece half of the people who look at it say, ‘Oh that’s so funny!’

You know, they sort of identify with having to unwind in a bath with a bottle of wine and the other half sort of look at it and think it’s really dark. They look at the bloodied up elbows and knees and joints, so I’ve gotten a lot of really mixed feelings about it. My art teacher loved it. He really loved the dynamic aspects to it and the real contrast of the different opinions that it was getting.”

Prof Lieu: “What I find really fascinating about this piece is that part of me thinks it’s fun and whimsical and has a real sense of humor to it, but then I get to the figure and it’s so dark and almost disturbing. The way that the limbs have been cut off, you have the splattering which really reminds me a lot of blood and I think that’s strange because I think a lot of artworks that I look at they’re either one or the other. They’re either full-out humorous and funny or they’re completely dark and difficult and harrowing to look at, so I think that’s such an accomplishment that if you could have a piece that- it almost has an identity crisis in a way, in a good way.

You had a bad day, and I think that’s one of the really captivating things about this piece. It really sustains your tension. I’m wondering, did you do that on purpose? Did you have that in mind or did that just happen when you made it?”

Lucy: “Kind of both in a way because talking to this woman, she is very cynical. She kind of has this sense of almost like a sense of humor where she recognizes kind of like the whimsical parts of the world and kind of shuts them down and she has this sort of dark way about her.

Prof Lieu: “One of the things I really like about the figure is that didn’t include the head, because I think what I see a lot in figurative work is people are very reliant on facial expression to convey emotion.

That’s the first resort that everybody goes to and yet you’ve removed the head entirely and what I like about that is it really forces us to think about the physical experience of being in the bathtub. Because if you think about being in the bathtub, the reason why people do that to relax is because it physically takes over your whole body, your body is immersed in the water.

And also the gesture of the figure I think is quite good. The fact that his leg is extending outwards a little bit ridiculous in a way. I like that a lot. I’m wondering about the bloodstains though, I mean did you want those to be blood or did you want them to be more suggestive…?”

Lucy: “I did, so that was a bit of a process for me-and I’ve gotten actually two things from people looking at that. So some of them I have gotten the interpretation that it looks like wine may be affecting the joints which I thought was interesting. Like it looks like drunkenness, almost like spreading throughout her body.

My intention though, it was supposed to be blood. It was supposed to be kind of like, well she told me she kind of felt beat up and bloody by the end of each day. Like each day was such a burden, so that was sort of a physical representation of her being beat up. Like literal cuts on her joints.”