Artist Statement
“In the broad sense, this painting is about feeling controlled by someone else, but being unable or unwilling to break away from that control.

The idea for this particular situation came from an experience I had last year with someone that I really hoped would love me too. I was stuck with the feelings that I had for her, but I was frustrated about it. I knew that I had to let it go but I couldn’t seem to. If I thought I had gotten rid of it, as soon as I saw her again they came back full force.

The veins and arteries attaching themselves to the bird figure are meant to signify this feeling of being controlled. The mask on the other figure symbolizes the hopes that I had had. The bird figure is trying to escape but is unable to. “ 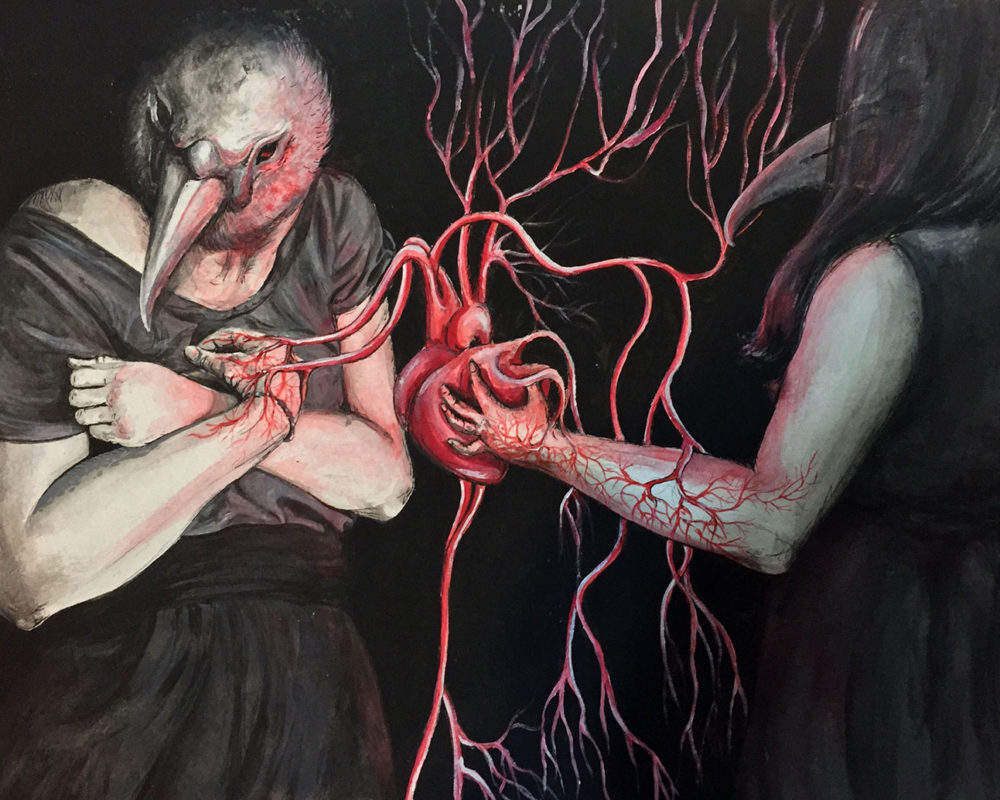 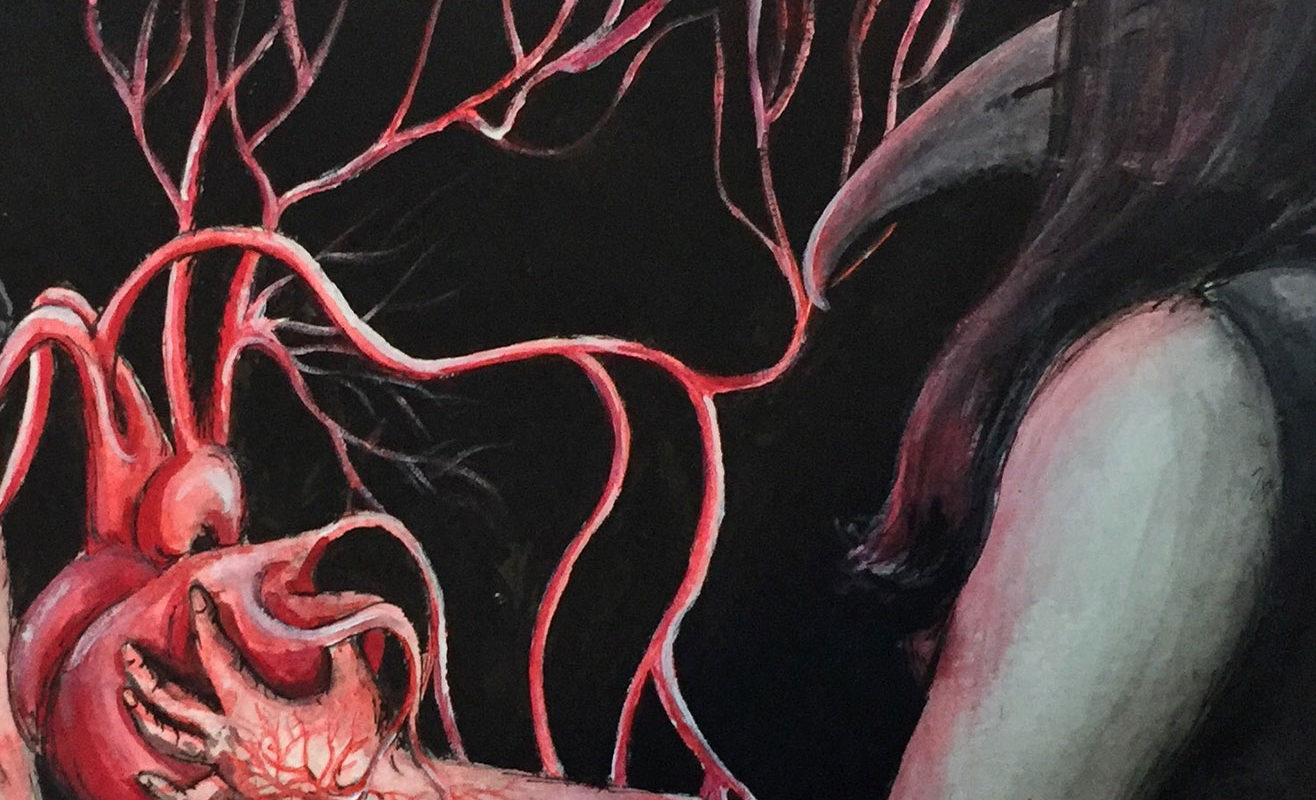 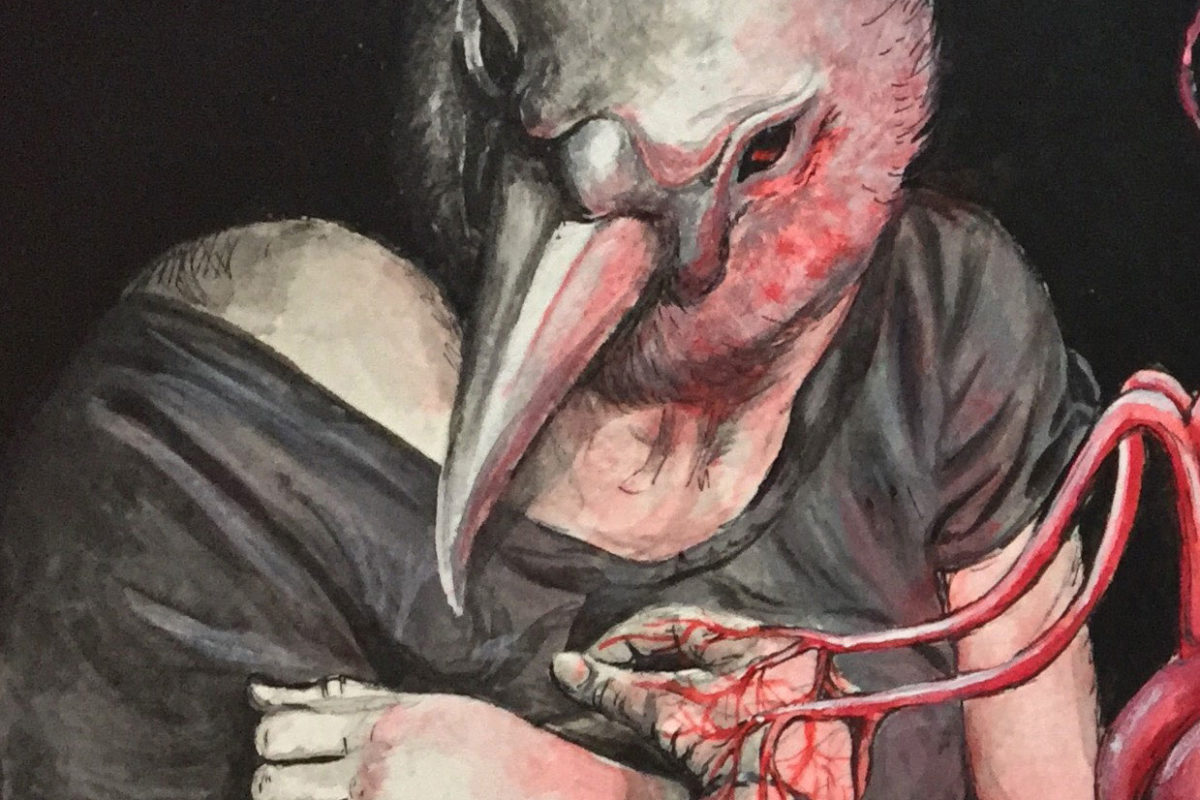 Prof Lieu: “I think this is such a startling image. It’s a piece that really piques your curiosity right away. It’s got a lot of strange and unusual imagery and it’s the type of piece that you really want to spend time with. You really want to think about it, you want to know what’s going on. It seems like this is a very specific narrative and I like that about this piece, that I really want to figure out what it’s all about.”

Casey: “Yeah, I mean I like that there’s a few different elements that you can kind of focus on and they also really take advantage of the full breadth of the the paper. Everything sort of reaches to the edge. Every element is considered.”

Prof Lieu: “And not just tension but I also think mood. I think the mood of the piece is very stark. It’s very dramatic, I mean you really feel like there’s something wrong going on in the piece. There’s definitely a lot of conflict going on between these two figures, so I’m kind of wondering what you guys think the relationship is between the two figures as depicted in the image.”

Casey: “It’s interesting as I think there’s some ambiguity there that’s intentional, but I’m also a little bit confused by that actually.”

Casey: “Yeah, I think the sort of body language and the acting, if you use that word in that regard, is really strong in terms of the figures and I think in that way that power dynamic reads but also a little confused about the way that the heart at the center of the canvas interacts with those figures and what that sort of symbolizes, because it does feel like there’s these sort of veins going into the one figures arm, they are going into both figures arms, but there’s more going into the sort of more antagonistic figures, so it seems like kind of a mixed message.”

Prof Lieu: “Well it’s interesting that the heart really is the one subject in the image that does physically connect the two figures because the two figures never touch each other. It’s the heart in the middle that then latches itself onto the two figures and I know what we were reading in the Artist’s Statement that this piece really was about this relationship, and this person feeling very controlled by another person.

I definitely can see that the figure on the left is definitely the one who is not in control but I guess I feel like the heart in the middle is attacking both of them and it seems like maybe the more controlling figure should be using the heart as the weapon against the other one, that maybe the heart should be much more aggressive. Because I look at the veins on the figure on the left and the veins, they’re so small and miniscule.

It seems like the veins should almost be strangling that figure like it should really feel trapped in a way. I’m not convinced that the figure on the left would have difficulty leaving. It seems like they can just rip the veins off and run away. And it sounds from the statement that it was a much more intense situation than that.”

Casey: “The body language of that figure doesn’t match the way that the heart is interacting with it. It feels like they’re being tangled up in those sort of defensive positions.”

Prof Lieu: “I think it’s a very complicated relationship that the artist is trying to portray and I really admire that they’re taking on first of all such a personal subject. I think it’s really difficult to take on something that’s so emotionally close to you, to put it out there for people to see, so I think that’s really brave of the artists to do that. On the other hand I do feel that this is a piece that needs that verbal explanation to compensate for some of the ambiguities in the piece.”