“I am a senior in high school who lives in California, but I was adopted from China when I was one year old. My portfolio demonstrates how versatile I can be with art, and how I can challenge myself with different art mediums. Some concerns I have is how my pieces connect with each other. A short term goal I wish to accomplish is to be less technical (detail oriented) with a piece and to be more comfortable with three-dimensional pieces.

I hope in the long run, I can be decent with character design as I have stories I want to create comics with, but I still feel uncomfortable with drawing people. (realistically and ‘cartoon’) I really struggle with having a centered subject in my drawings and find it difficult to express what I want through my piece. What makes sense to me, might be confusing for others when they look at my piece.” 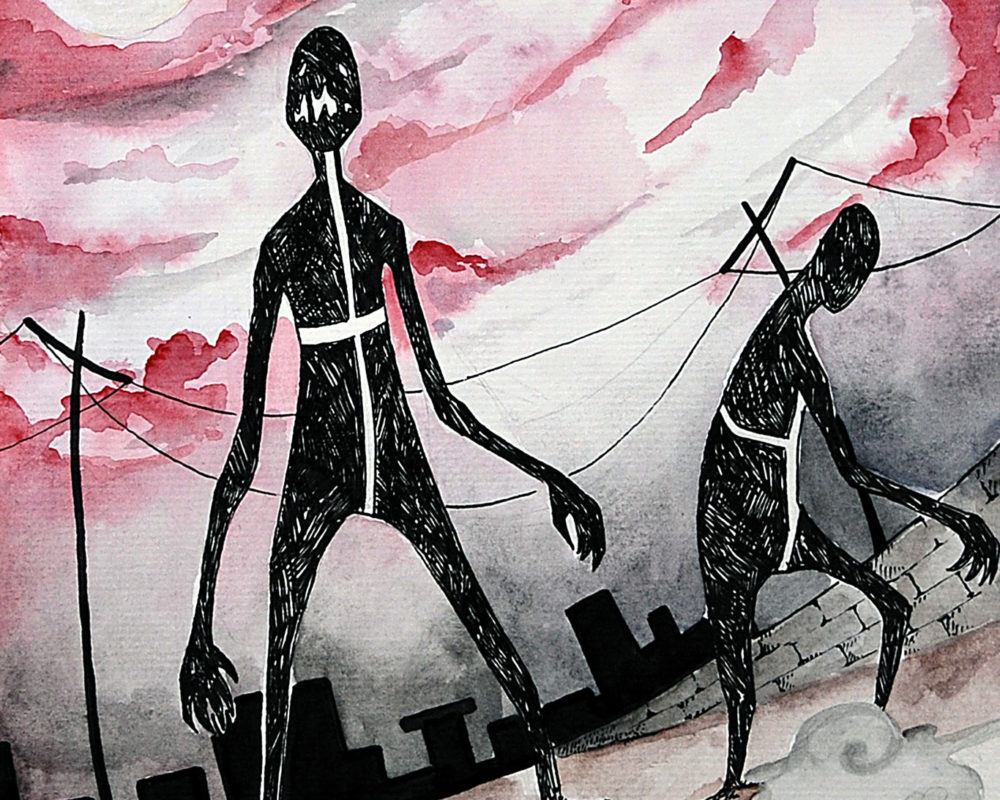 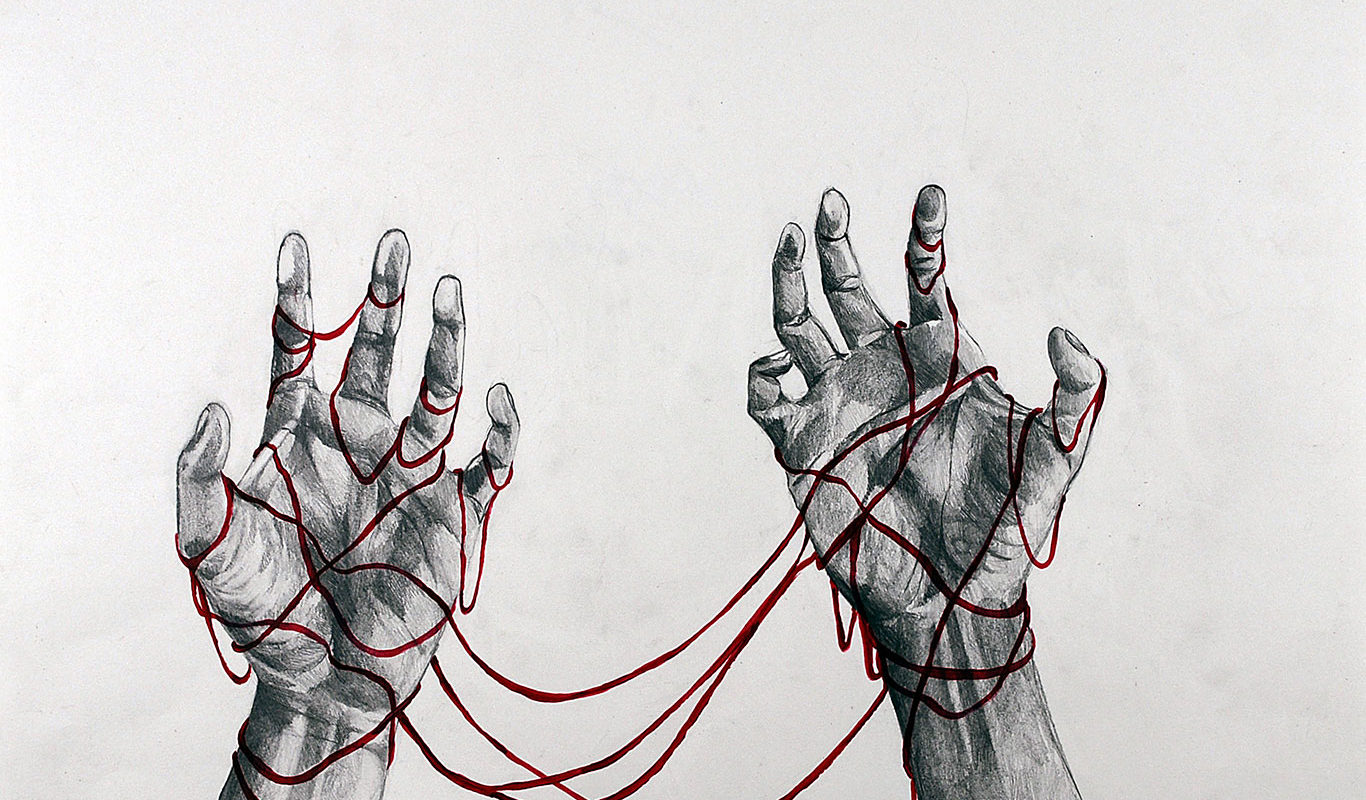 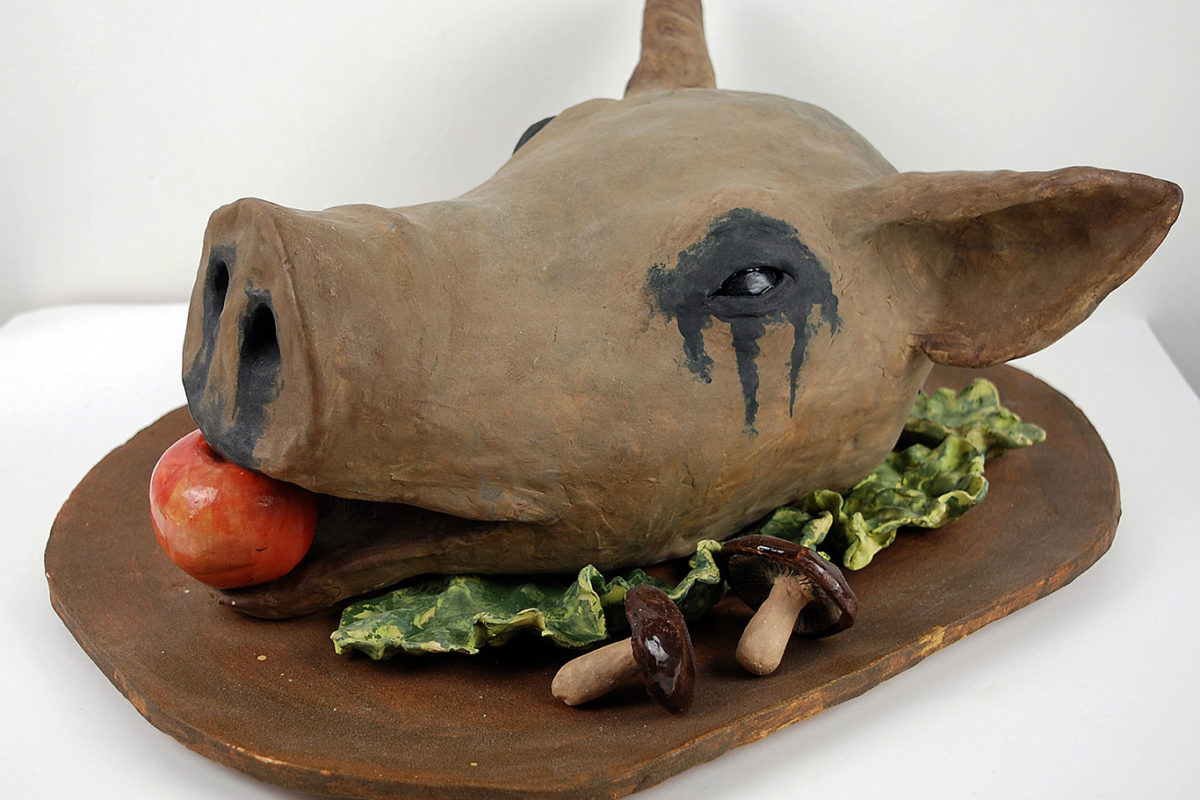 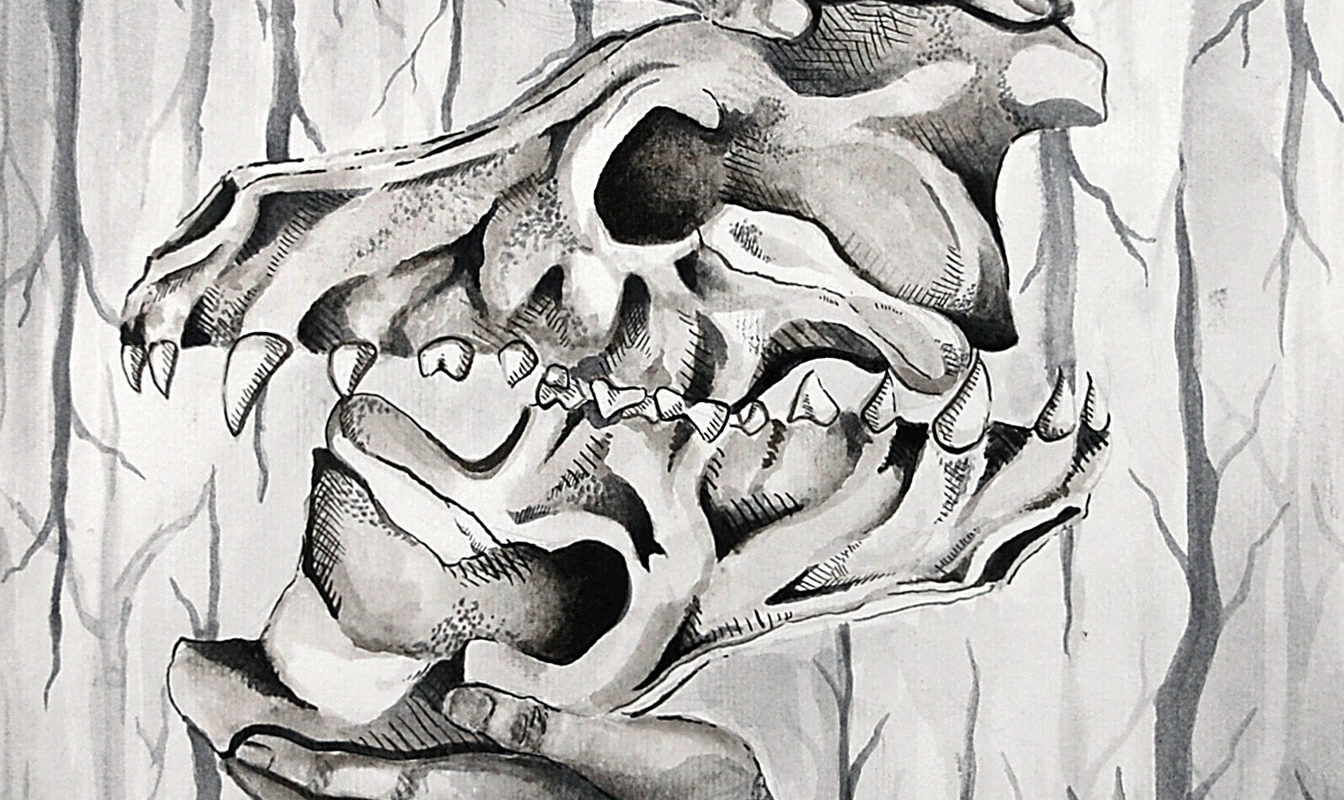 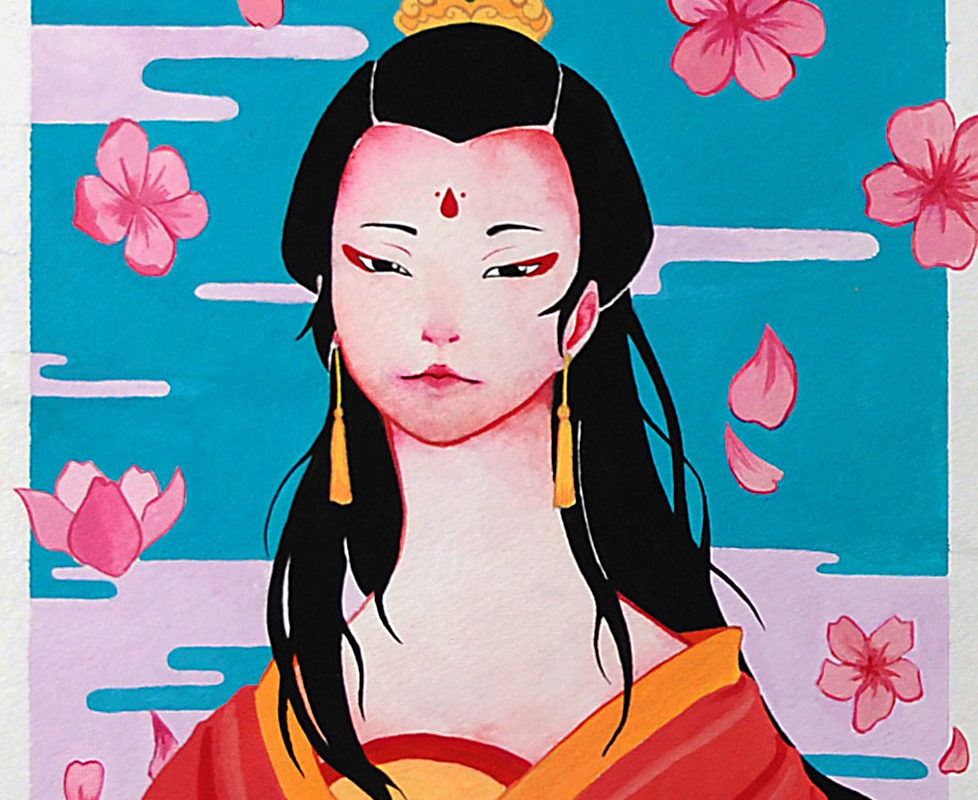 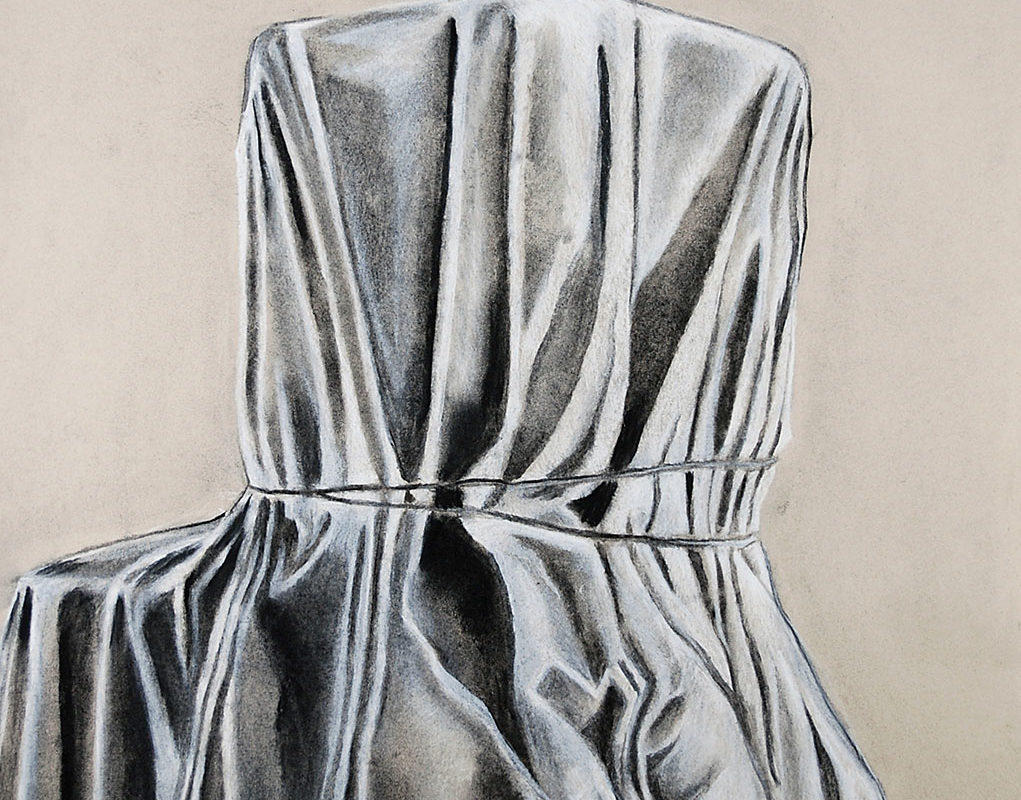 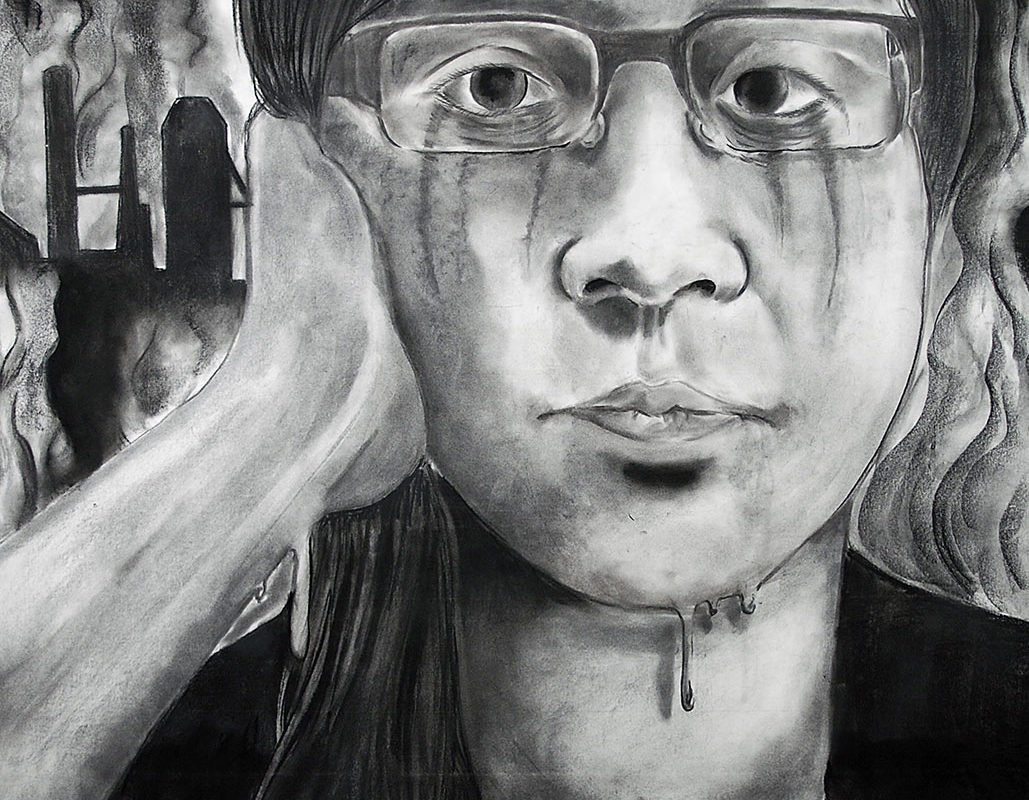 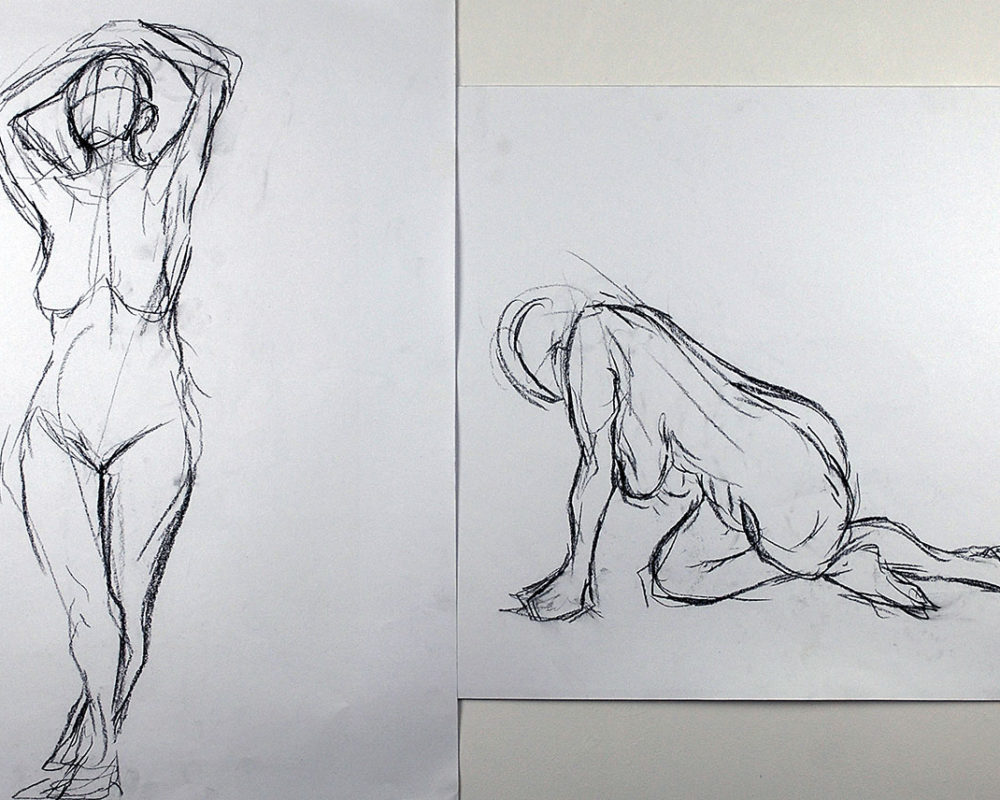 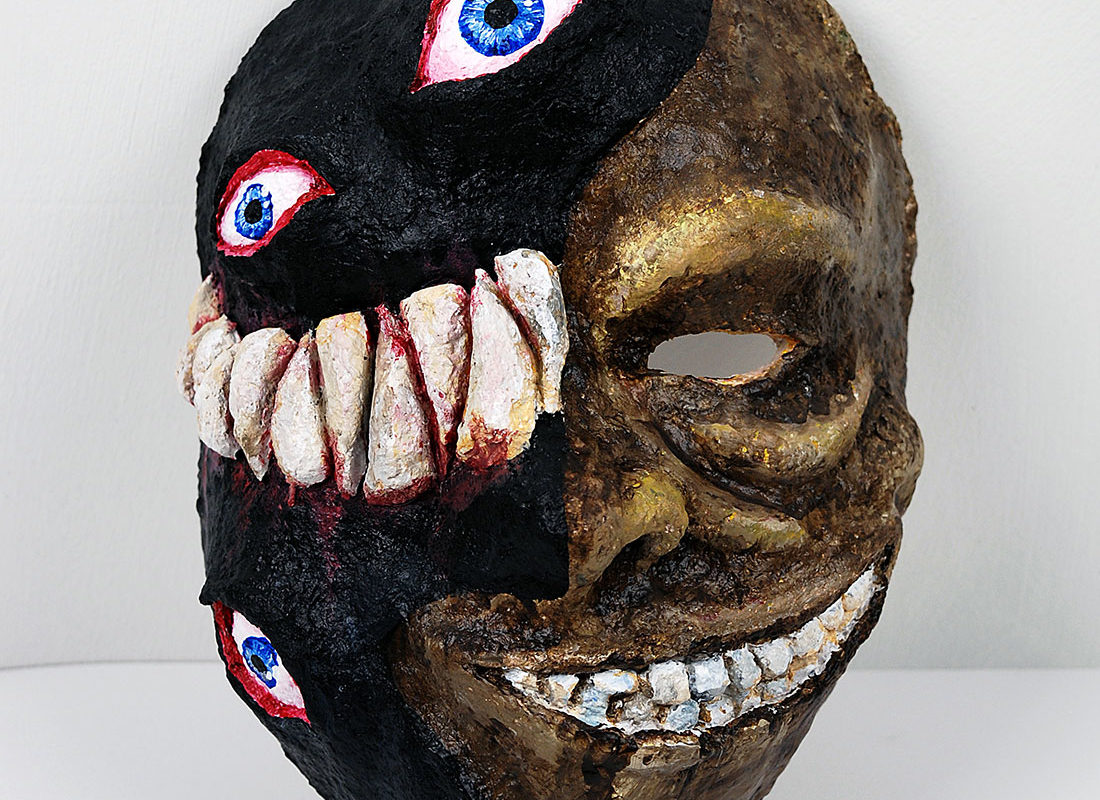 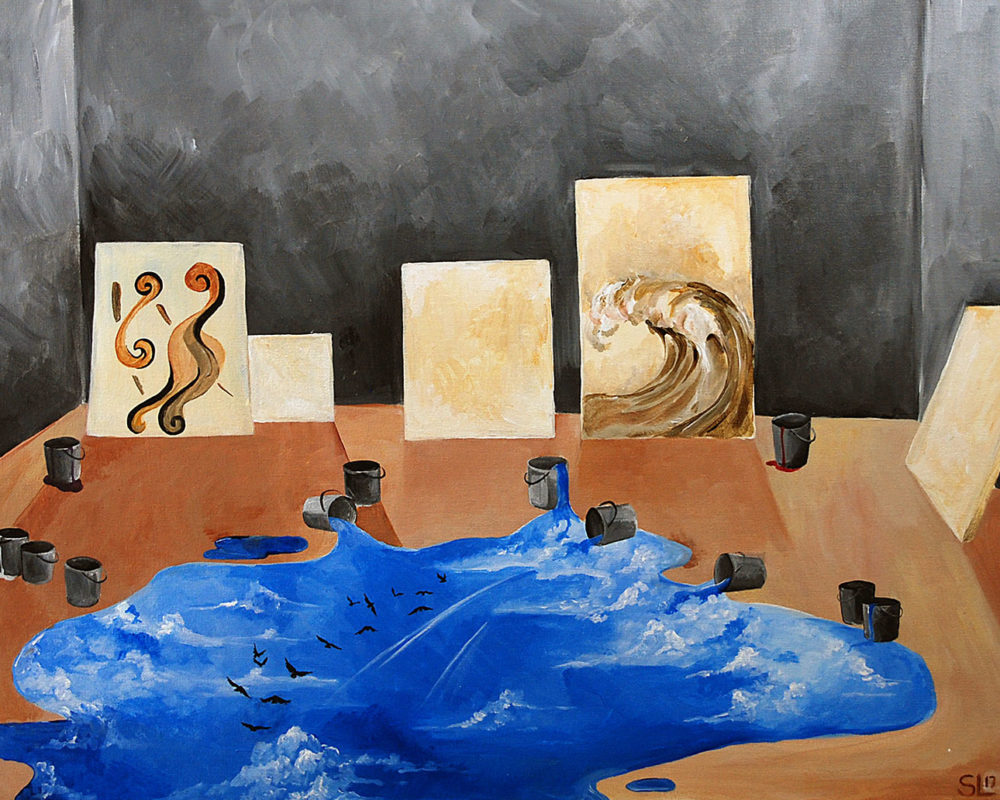 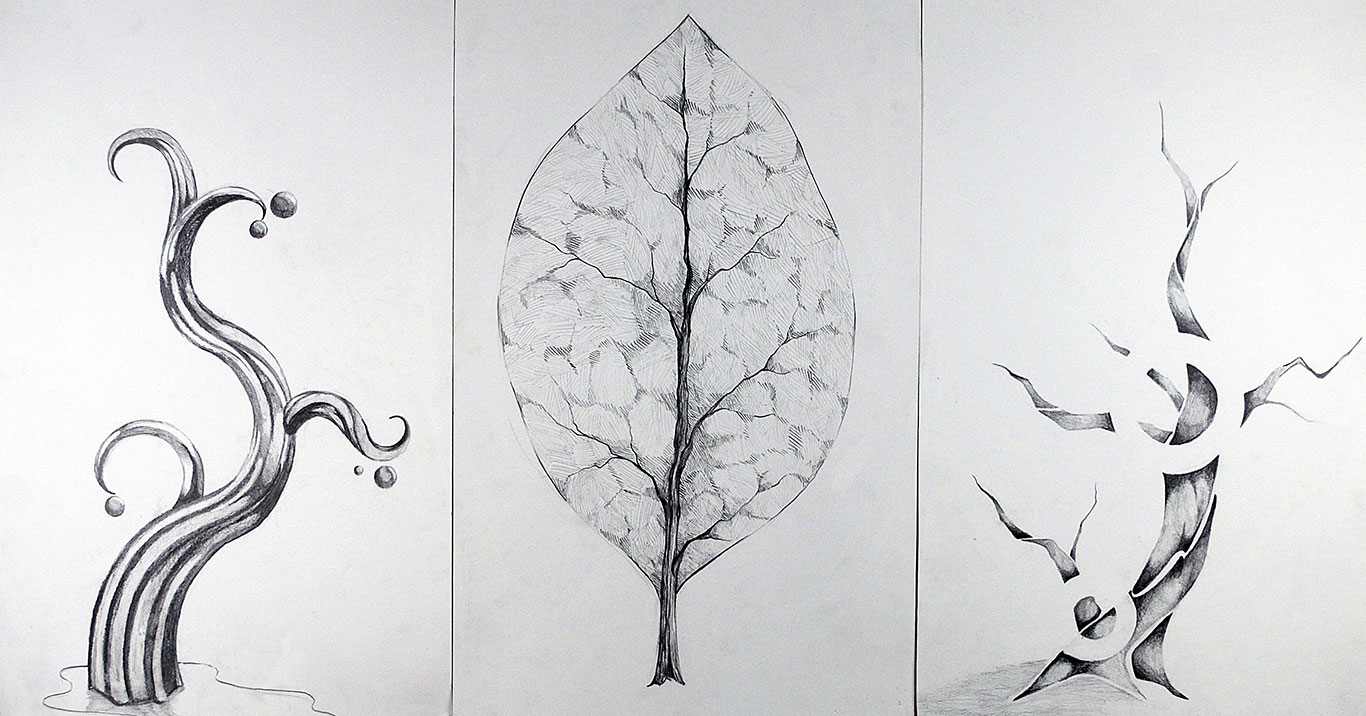 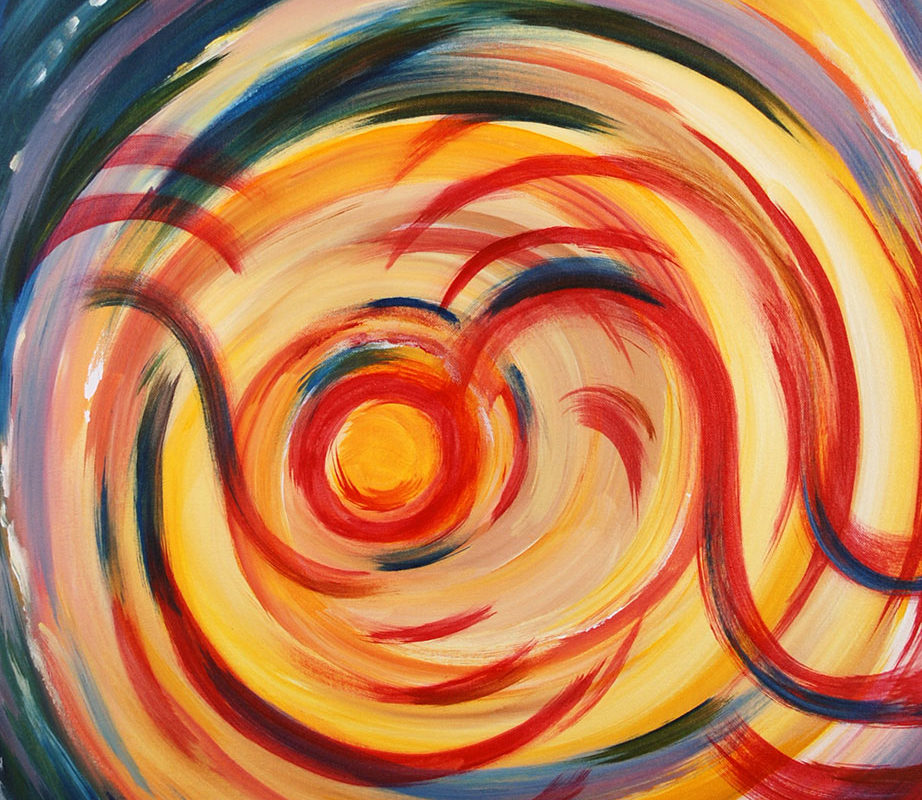 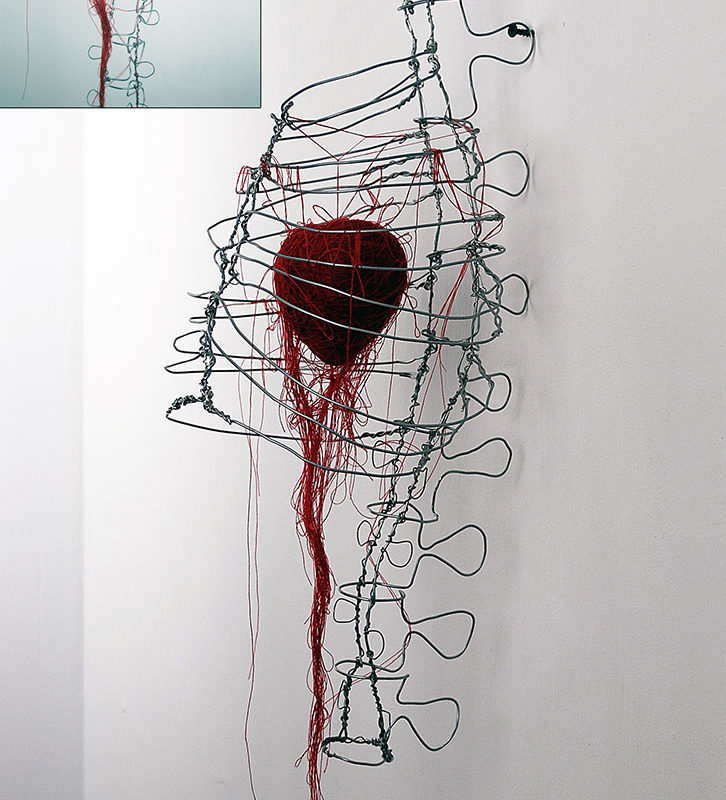 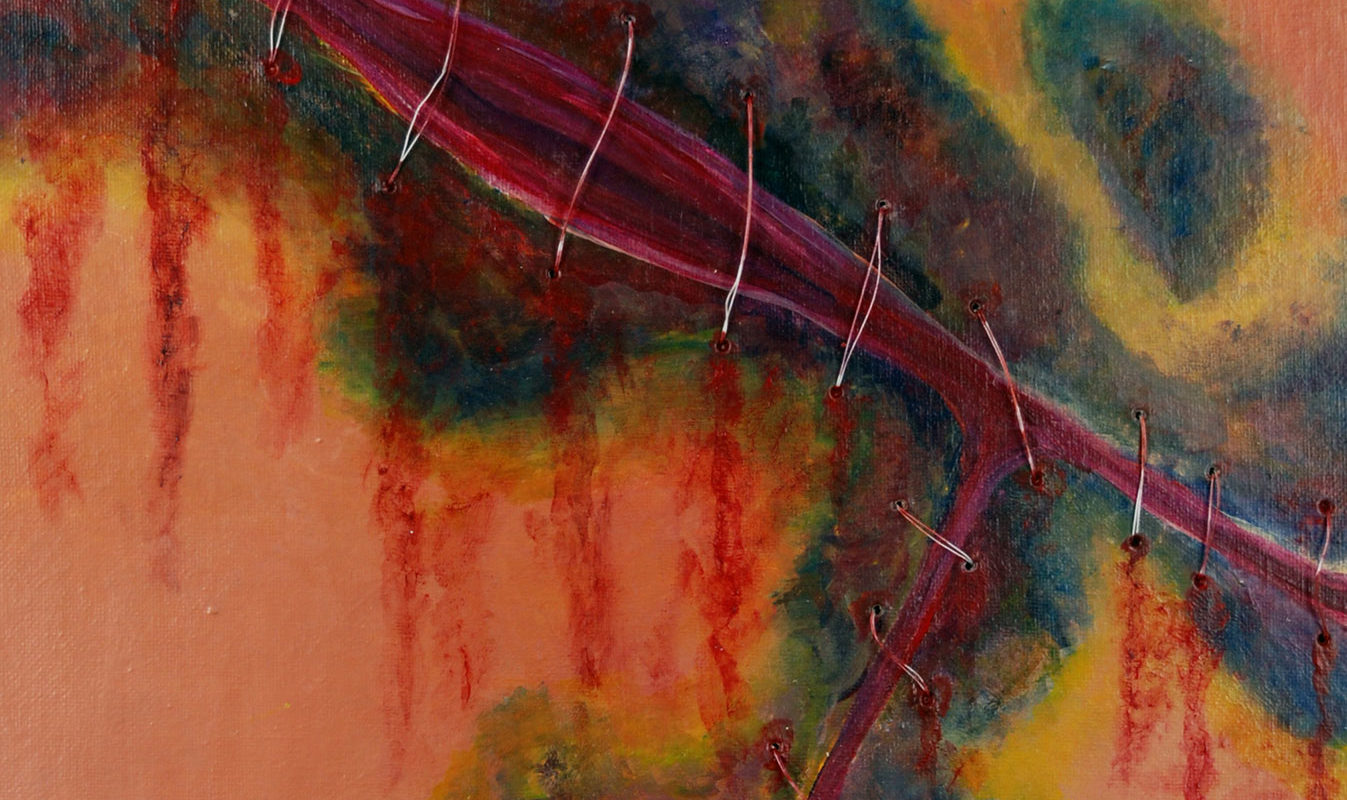 The first thing I’m going to talk about is your understanding of form and volume. I’m particularly looking at this image. You have the chair that’s covered in a cloth, and wrapped by this rope. I think this is a really strong start to understanding form and value, and I can tell what’s underneath the cloth just by looking at the way you’ve drawn it; and it’s really really strong.

You have a lot of good indications of what kind of folds there are;  the drop folds versus exact folds, and what have you it shows that you have an understanding of how to create 3d objects.  Without this fundamental knowledge, it’s going to be very difficult to draw other things, especially something like the human figure.

In your artist statement, you mentioned how you were interested in character design, and this is a great start to learning how to do that for the future.  I would also recommend you taking 3D software classes, or learning how to use something like ZBrush or Maya, or anything that will help you to learn how to sculpt in three dimensions. Because based on the way the industry is going right now, people who are very versatile like that are going to be really really set.

I applaud you for your early understanding of forming volume. Another piece where I’m seeing this is in your portrait image of the hand on the face, and it looks like there’s fire in the background.  Now, I’m going to speak about this piece more in detail later on. This piece I would say in terms of form and volume needs a little bit more work, it comes from understanding the planes of the face. You can find many references online of what that exactly looks like; but what I mean by that is just the different sides of the face, or different sides of the hand, and the wrists and things like that, could use a little bit more depth to areas. Like where the hand actually attaches to the face, or actually is making contact with the face.

I think it could use a little bit more work. When we think of values it’s usually scale between one and ten, with one being the lightest, and ten being the darkest. Primarily what I’m seeing from you, especially in this piece, is values between 1 & 2 & 8 & 9 and so you want to have some mid-range values in there. Anything between 3 to 7 as well, and you want to be selective about where you place those.

If you want to find some some good reference, for that I would suggest looking at some Golden Age illustrators like Norman Rockwell or in Frank Frazetta. Do some value studies of their famous works. Spend no more than 5 to 10 minutes on them, and maybe like fifty to a hundred of these things, just to get you to understand how to put values together, and how they use it to tell a story.

One tip I can share about that is when you’re doing these value studies, only use 3 or 4 values. Don’t worry so much about the object as the shape, because sometimes the object itself is really just extra filler but what they’re really trying to do with their composition and their shape is point you to that focal point. So I think you should really pay attention to that.

I also noticed in the artist statement you mentioned that you are really interested in comics. You might have read  something like Hellboy by Mike Mignola, who used a lot of flat or live stark black and stark white. In his pieces very he uses very little gray, and maybe that’s part of your influence.

I still think you should get some of this understanding of mid value range in your work as well your color sense. Some pieces are working really well,  and other pieces not so much. The piece I really like is your painting of the woman in the Chinese portrait style. I really think the colors are beautiful in this one. I think they’re bold,  they’re fun. It seems romantic.

And if you want to keep improving on this, I would suggest doing color studies or color keys from different like Disney and Pixar films.  You may or may not know, but one of the things that companies like that do, or those or Disney and Pixar do is that they do color scripts for every film that they create, so that they know exactly what each scene is going to look like. Or they actually go into all the work of producing it, so that they can make sure that they’re getting the right mood, and like feeling before all the hard work is done.

There’s some great ones from films like Moana, and like Toy Story 3, and and Up, and The Incredibles. I know I just named only Disney and Pixar there but there’s plenty of them around and I really think that that would help you.”