Artist Statement
“I’m a graduate of University of Houston with a BFA in Fine Arts. I’m currently residing and creating work in New York. I’m looking to enroll in a grad school program in the future.

In this piece, I wanted to commemorate me reading James Baldwin’s novel “Go Tell it on the Mountain,” because I felt it was a novel that reflected my spiritual adolescent life , growing up in the Pentecostal south. It’s a powerful progressive piece of literature that connects with my real life. The older head is supposed to be ‘schooling’ the younger head.” 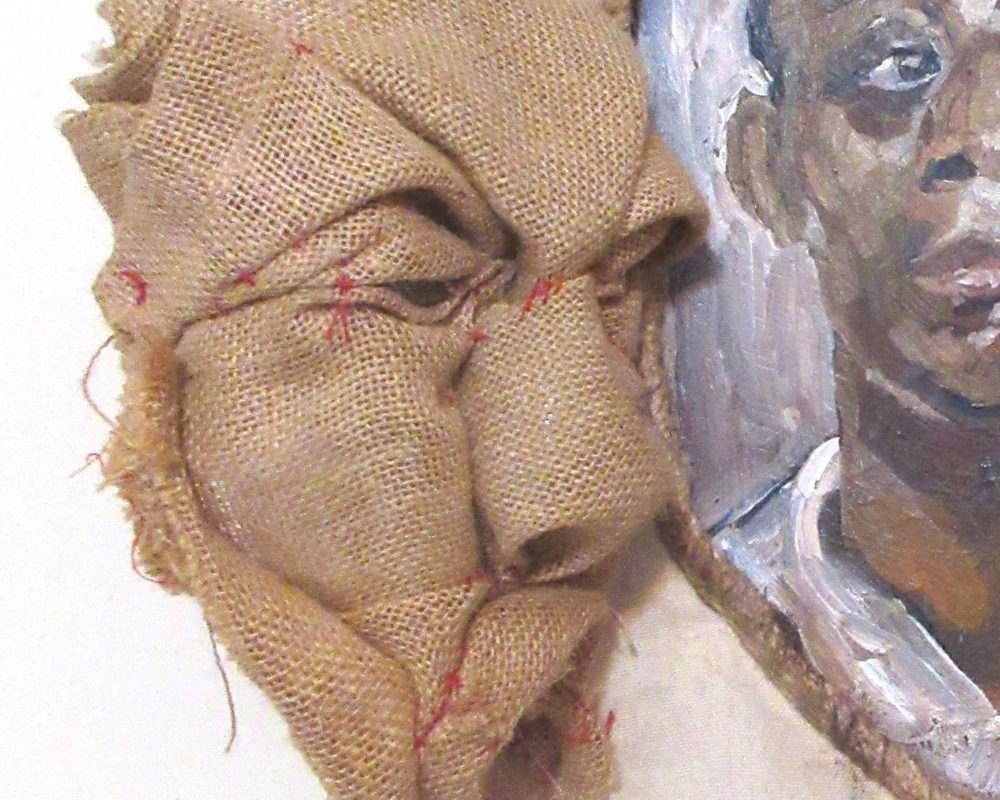 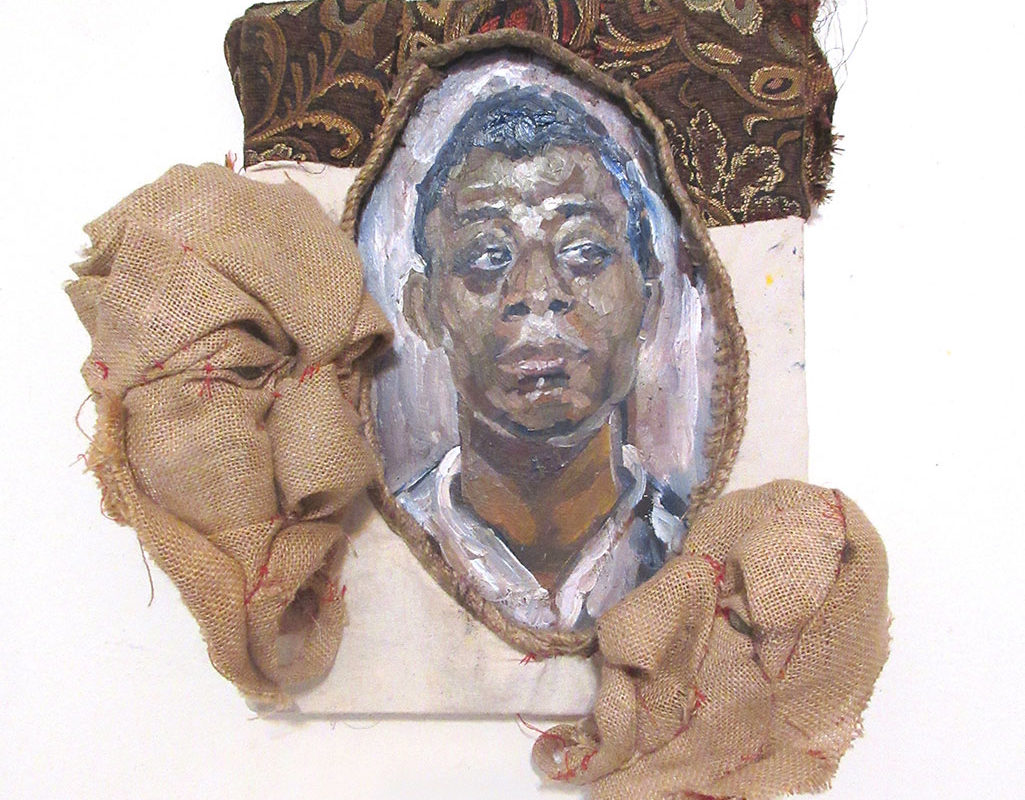 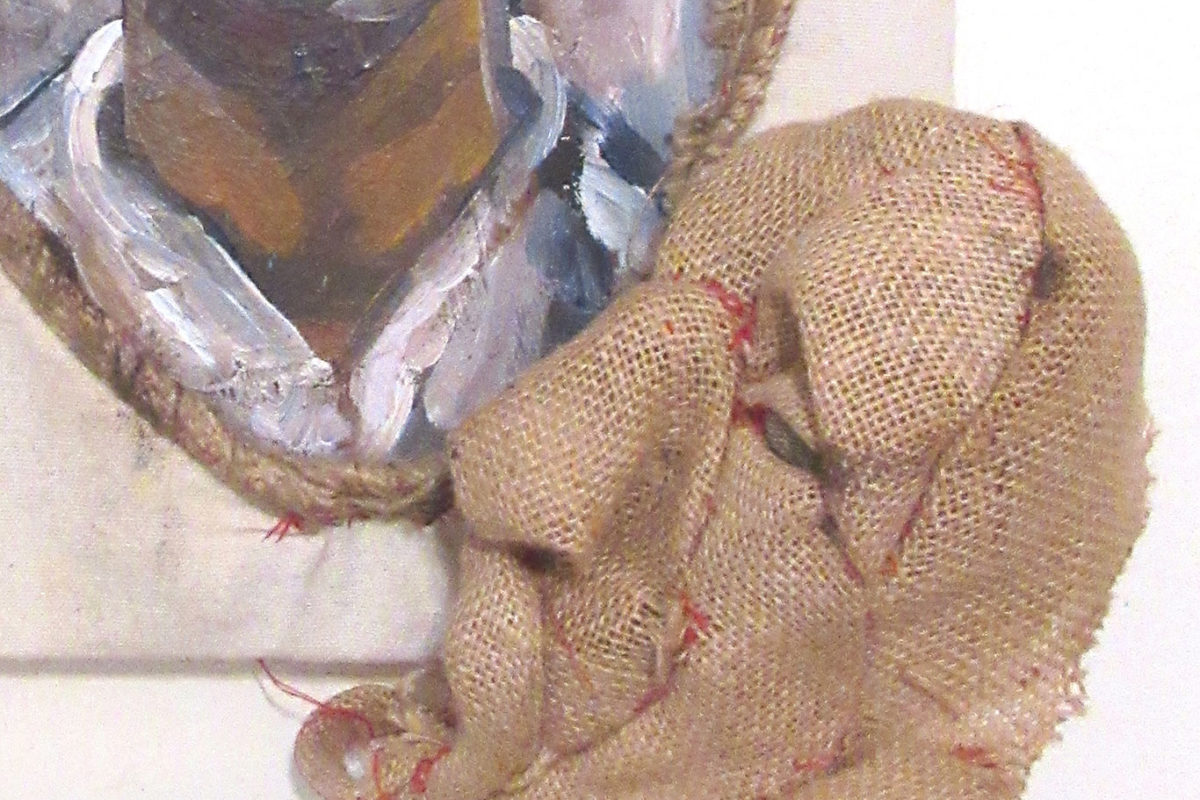 Prof Lieu: “The three faces in this piece I think convey a really powerful sense of emotion. The two burlap faces at the bottom I think are terrifying. There is something about the facial expression in the way the mouth has been formed. I mean they’re just screaming in a way and then the way the figure has been painted looks almost standoffish. There’s some really complicated dynamics going on between those three heads.”

Deepti: “For me personally I feel like the painted head is a self portrait. I get this sense of how the person is composed, and I also feel like they’re kind of protected from the conflict but somehow involved, and I think it’s because they’re in this oval shaped framing, which I kind of associate with how you frame a loved one or something, in like my household or even those like charm necklaces that you like put someone’s photograph in. It reminds me of that oval shape, but they’re definitely still like involved, I feel like because these two figures are so close to them. They’re just right outside the border.”

Prof Lieu: “Well do you think that the painted figure can see the burlap figures, or is he like behind some other barrier?”

Alex: “The thing with the burlap figures is that I don’t think it really translates that one is like overpowering or schooling the other. You know like because they both look ferocious in their own way, and then just having one above and slightly larger doesn’t quite cut it for me.”

Prof Lieu: “Well they are very similar in terms of the way they are made. But I guess I was wondering about whether the painted figure sees the two because the painted figure, their eyes are really pushed far away to the right, and so it’s not like the painted figure is making eye contact with the burlap figures, but I agree with you that there’s definitely a deep connection between the three figures.”

Deepti: “Now that you bring it up, that kind of eye movement reminds me of like when you’re trying to really avoid something, like you’re aware that it’s in your peripheral, but you’re just like looking away, or like you know you run into someone you don’t want to see, and you’re like ‘oh my gosh,’ so I definitely see this person being aware of those burlap figures but maybe really trying to push it into their peripheral or just like out of sight out of mind.

What I wonder is if these burlap figures are in this person’s present life, or if these are memories of people, or how they like associate themselves, because they could still be having an effect on this person even if they’re no longer like physically, you know, a part of their lives or something.”

Alex: “Like it’s still not clear, but I see it as either like they are trying to like separate and protect themselves from something external or from something internal. I definitely get it as like the present, but either of those isn’t really clear.”

Prof Lieu: “I don’t know, I thought it was pretty clear the burlap faces are faces of the past. And I think part of that is maybe the ragged material that they’re made out of because burlap isn’t exactly the prettiest surface. It looks really old and worn I guess just inherently as a material, and then the fact that they’re stitched together sort of sloppily I think on purpose with that red thread. I think that too makes it look like they’re almost crumbling or falling apart, but then the painted figure does have a youthful appearance, and so for me that choice in terms of the mixed media really does communicate that.”

Alex: “The picture’s frame is, like you said, like you’d frame a family member in a very kind of like classic way, and the patterning as well, this kind of very older world kind of pattern. So so much of the piece kind of harkens back that I feel like it’s, they’re all in the same world and time frame, and that the material difference is kind of the difference in, to me it helps translate the harshness of the two frightening faces.”

Prof Lieu: “When you read the artist statement, the artist talks about James Baldwin’s novel, and how the experience of making this piece is them commemorating their experience reading the novel.”