Imagined Roadblocks: Learning to Accept My Passion for Comics.

One of my fondest memories from early childhood was coming home from school to draw pictures, which I proudly stuck on the refrigerator door. Art lurked in every corner of my mind—when I was bored at school, I drew caricatures of teachers I despised, or classmates who happened to irk me. Once, my math teacher confiscated my sketches, and in a fierce act of retaliation, I began doodling on the desk. The teacher caught me (again), and faced with no other option, I doodled on my hand. She couldn’t possibly take that away. Nothing could stop my passion for drawing.

In third grade, I stumbled upon the Bone graphic novel series by Jeff Smith at my school library. At first, I was mesmerized by Smith’s creativity and crude humor, but what truly earned my loyalty was the constant mingling between text and images. In my eyes this was revolutionary, because it felt like two of the greatest things in the world being combined together, and creating something even more incredible as a result.

After reading the Bone books for three years straight, I realized that I wanted to be a comic book artist. I wished that others could appreciate comics as I did. Several teachers have dismissed comics as mere books for children. From my perspective, comics are  a versatile format for telling stories, no matter what the content. 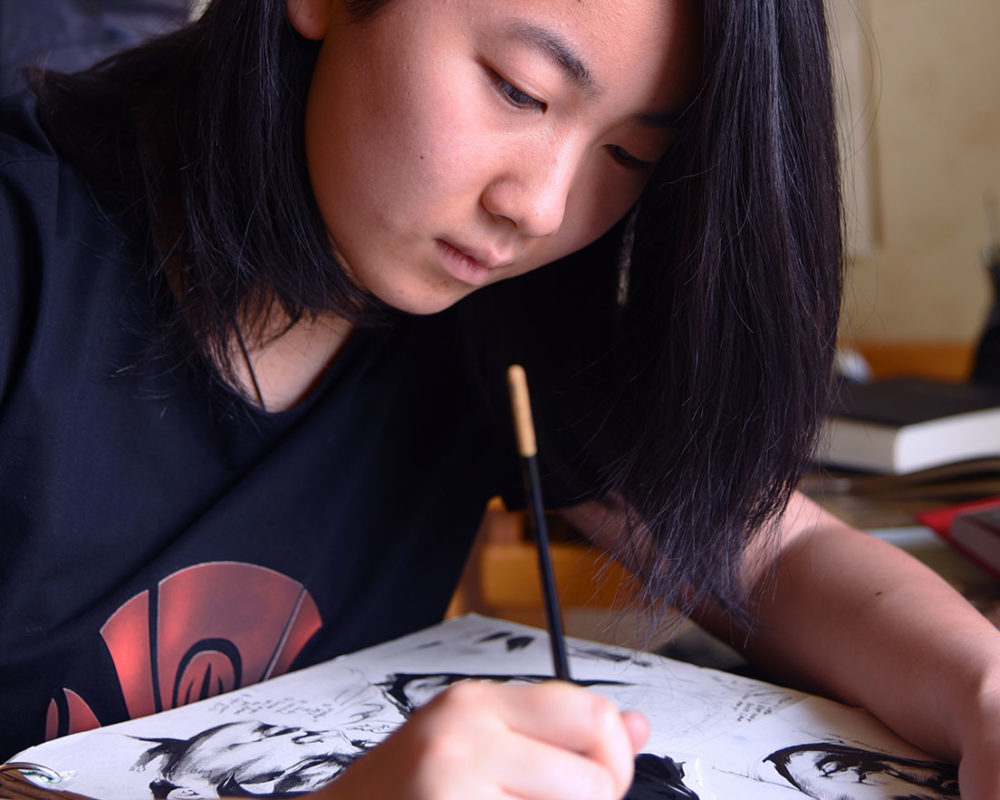 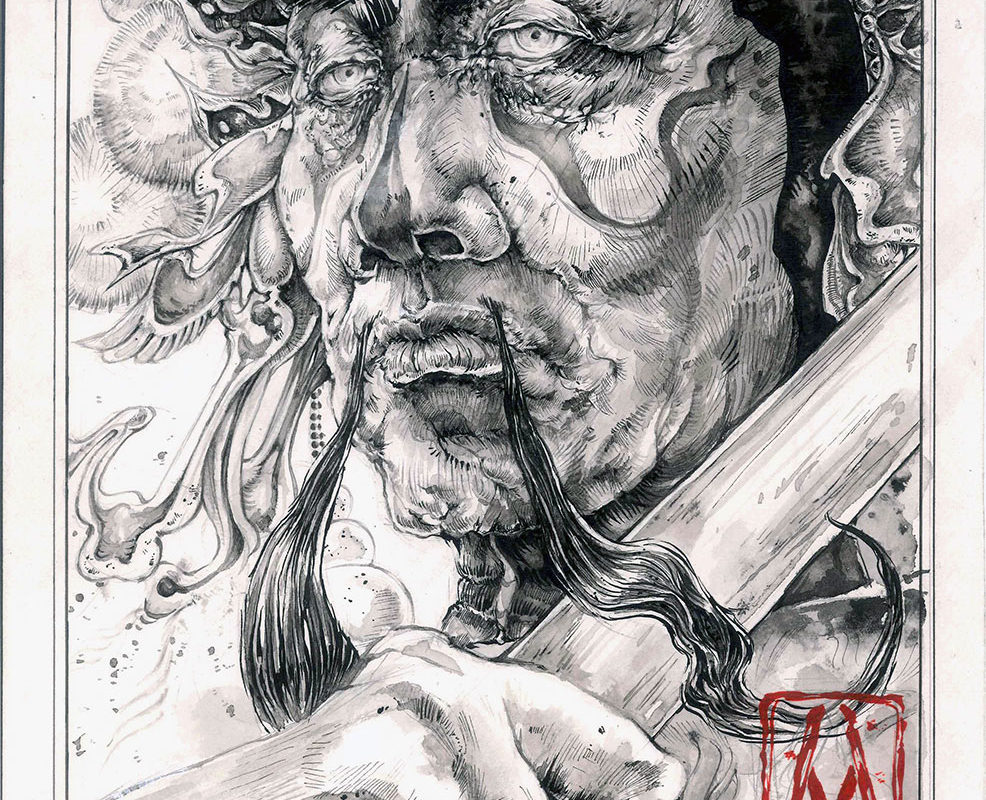 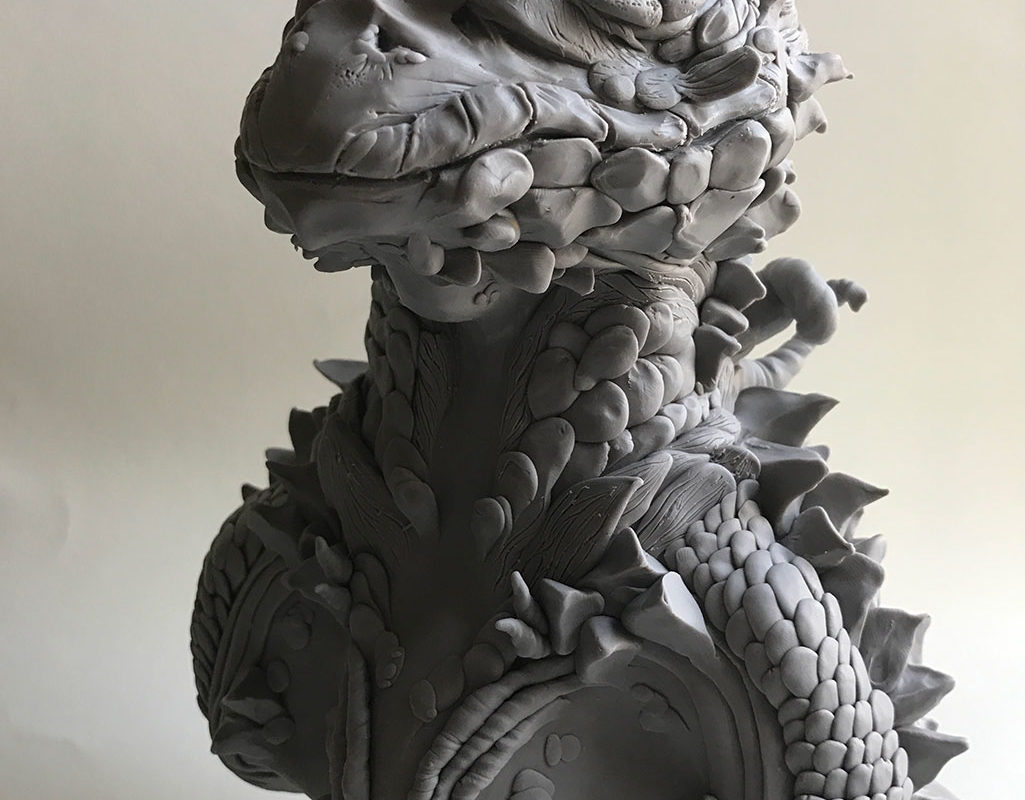 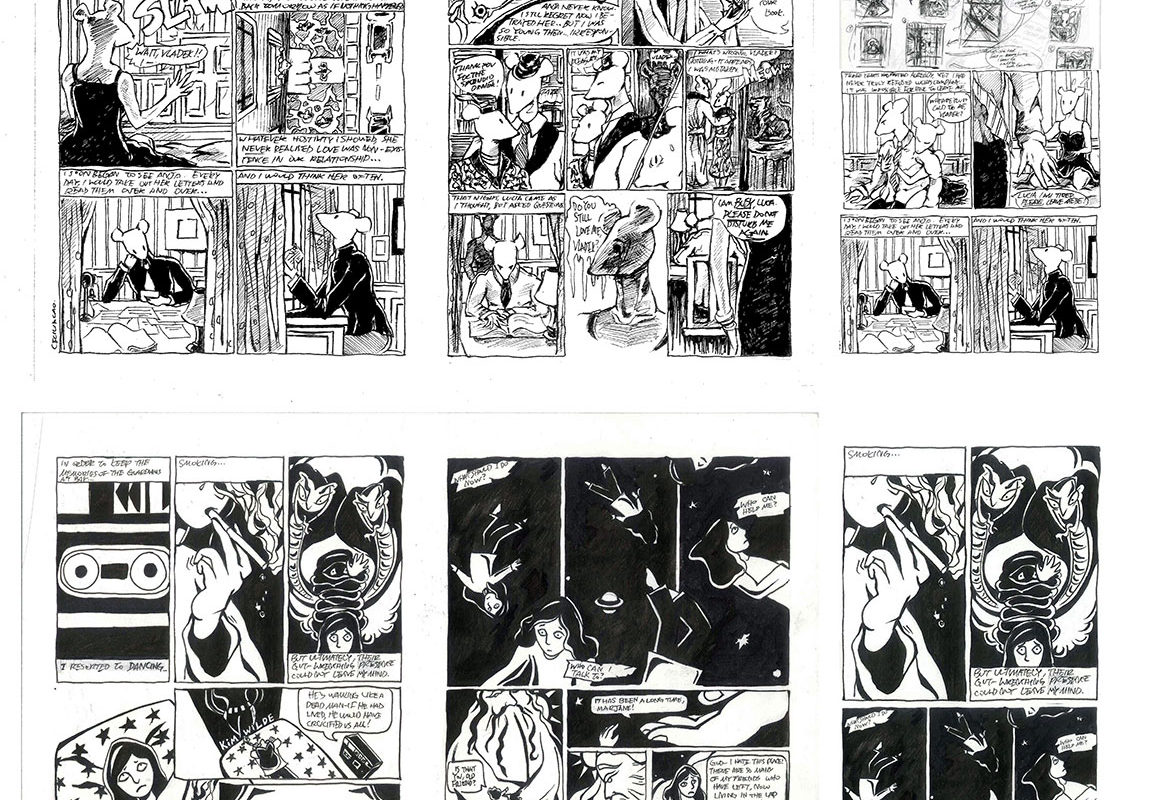 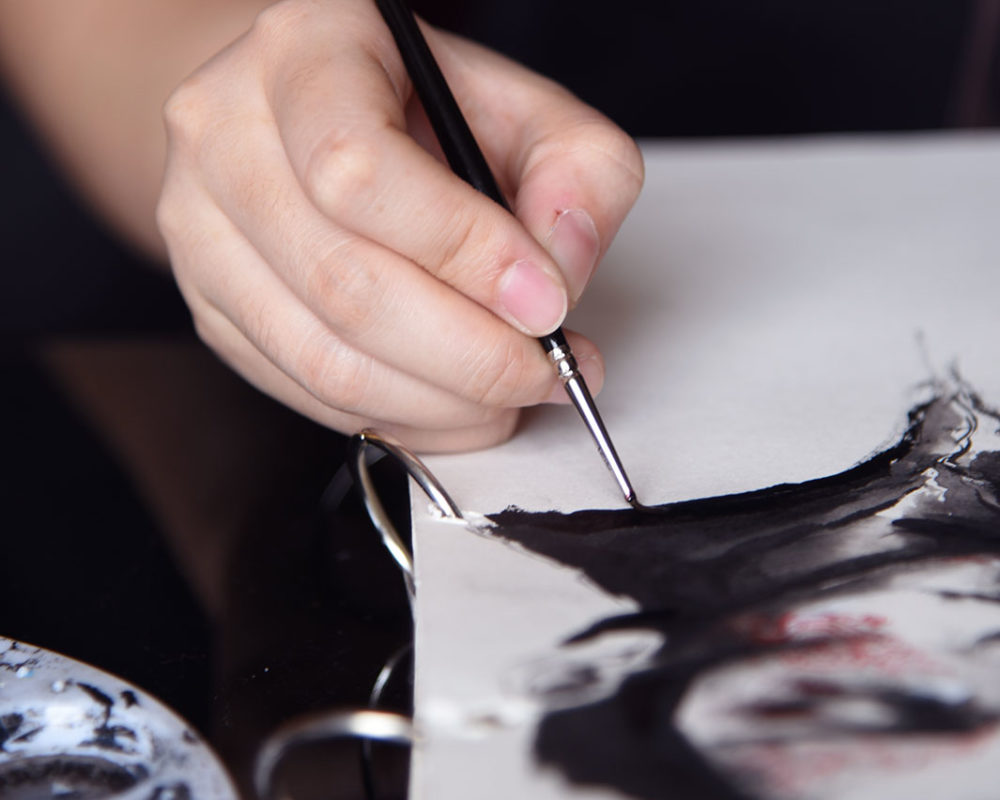 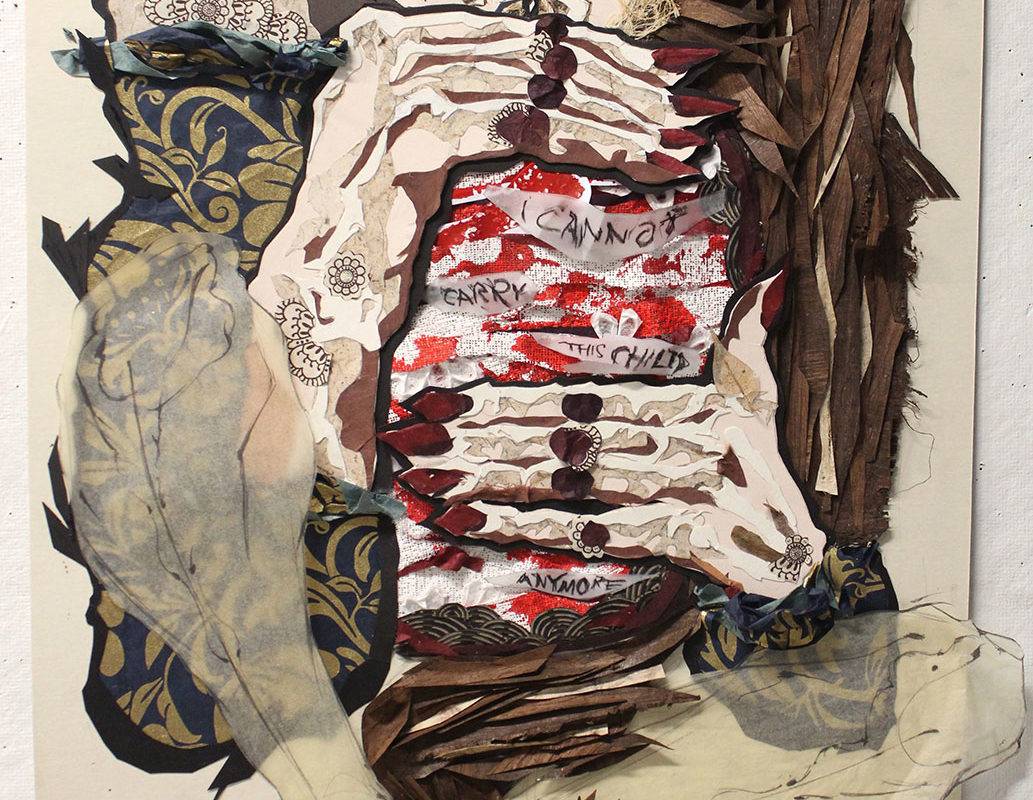 I set about preparing myself to become a comic book artist. I asked my parents to take me to art classes outside of school, which they supported. The subject matter in my sketches shifted from houses and stick figures to comic book characters from my imagination. I soon branched out to creating other kinds of sketches—I remember keeping a notebook filled with my own designs of sci-fi apparatuses. I was deeply enjoying myself, and learning from the books and artists who inspired me, like Smith’s Bone series, Dav Pilkey’s Captain Underpants, Jim Benton’s Franny K. Stein and Elisabetta Dami’s Geronimo Stilton.

Then something unexpected happened along the way—my family decided to move back to China for my middle school education. Moving to a new place that is different in culture and environment is terrifying. You lose the comfort of familiar places, and the support of your friends. For a long while, I felt like I didn’t belong at my new school, because no one gave a damn about my interests. My teachers were dismissive about visual art, which constantly reinforced to me the idea that becoming a comic book artist was an unrealistic profession. There were only a handful of students at my school who liked art, but we didn’t create a community where we could support each other. On top of that, none of my peers liked comics. I was desperate to fit in, so I drifted away from my comic books.

My sour mood continued to fester as I grew increasingly insecure about my own artwork. I had a terrible habit of comparing my artwork to others,’ and whenever I looked online like Facebook and online contests or or in class, I thought everyone else’s artwork was better than mine. I felt like I didn’t have an original style, and in my eyes there was no clear focus in my drawings. At the height of my insecurity, I could never accept a compliment about my art, because I assumed it was a lie. 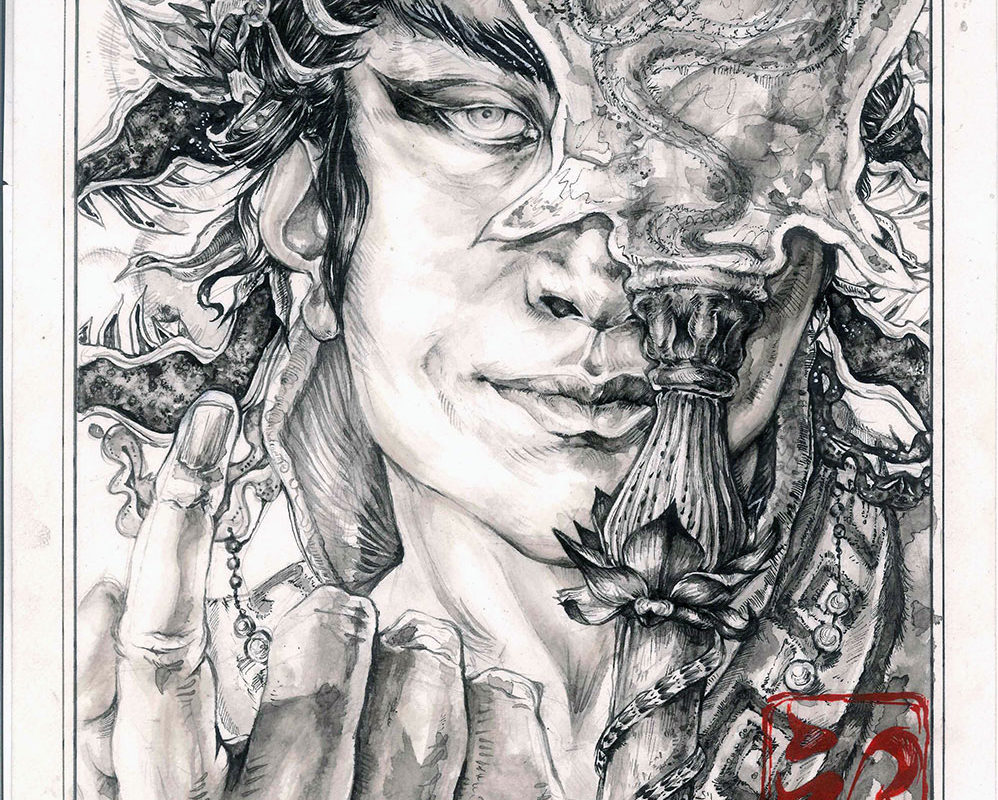 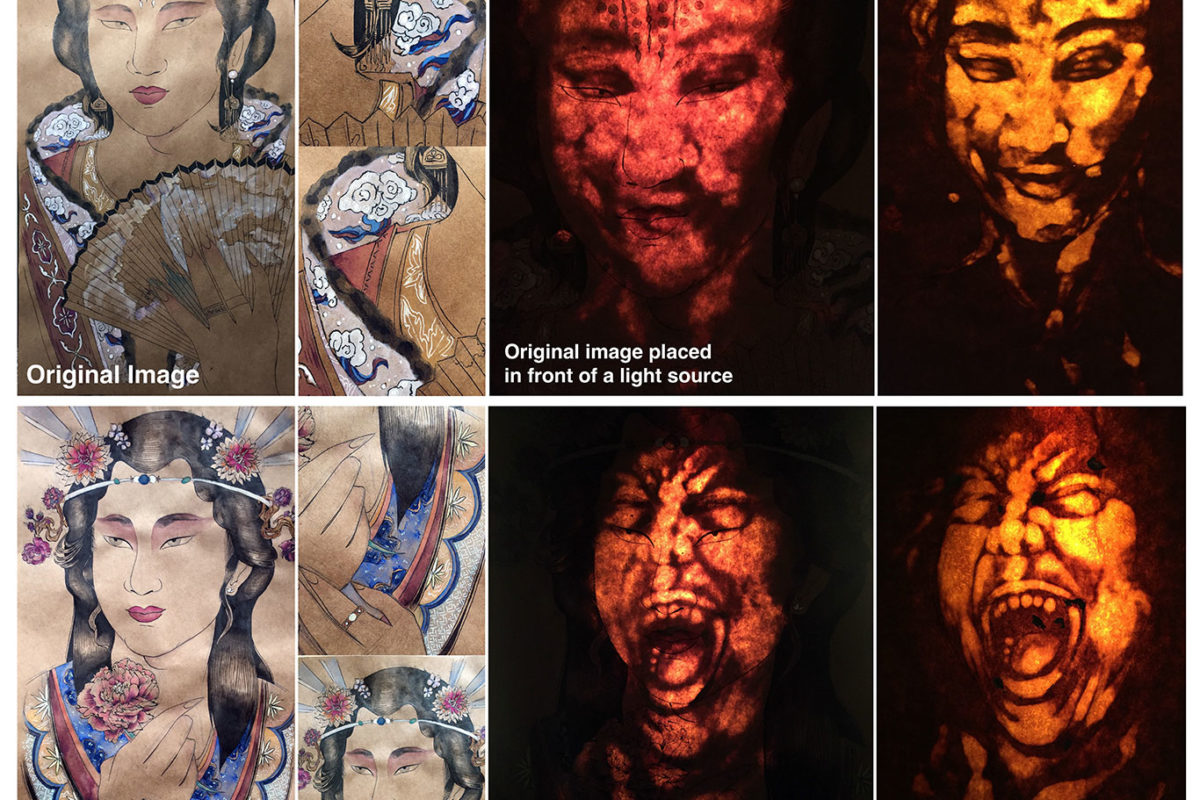 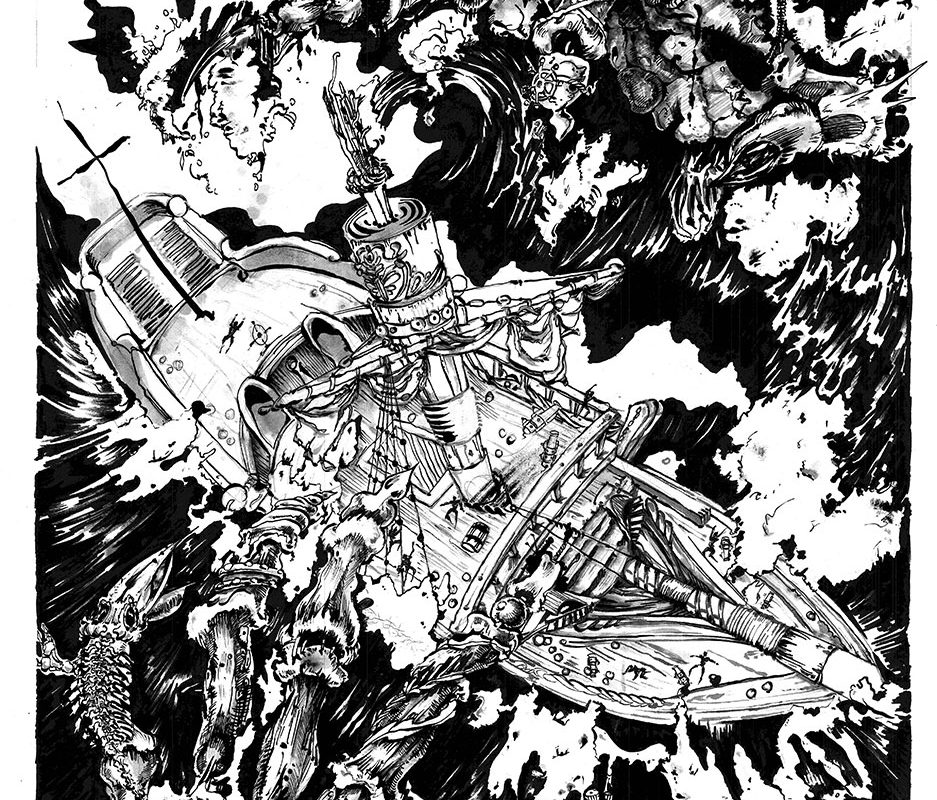 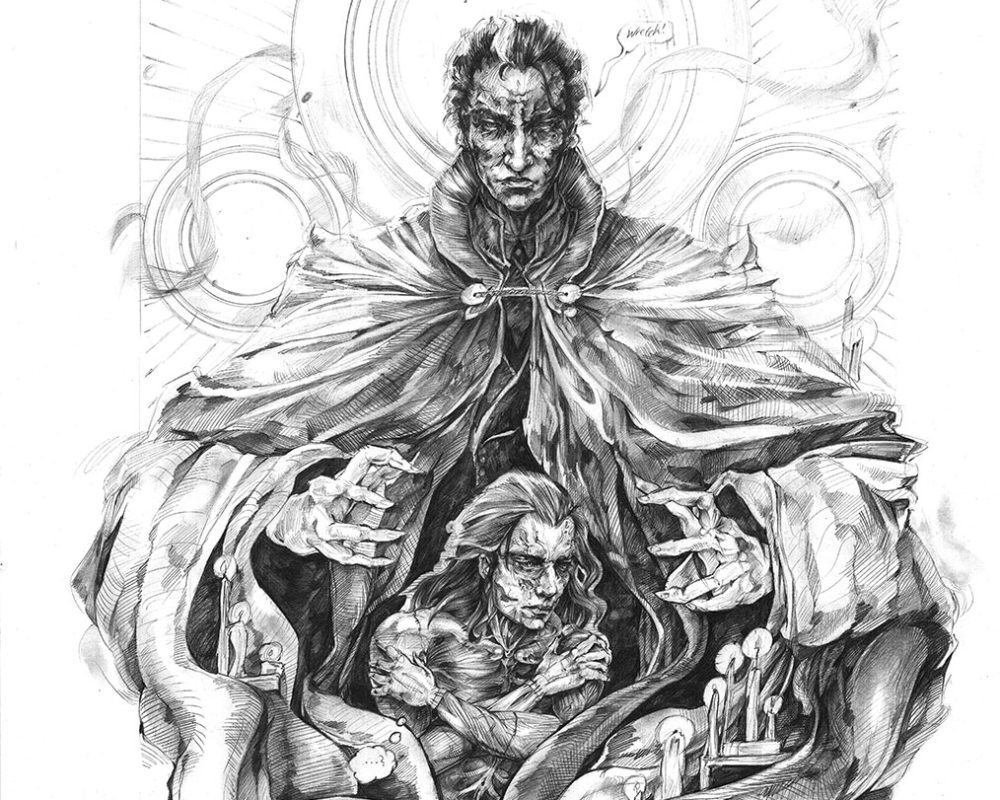 What truly dampened my spirits were the parental expectations that I thought existed. My parents are both very successful, and I reasoned that they would expect me to achieve both academic and financial success as well. My grades were atrocious (flunking and getting D’s) and articles I read online talked about how artists couldn’t earn a comfortable living. How could I give my parents the life they’re accustomed to—nice homes and expensive cars—all on a comic book artist’s salary? It hurt me so much to think that my parents’ only child would grow up to disappoint them.

In my last year of middle school, I met an English teacher who changed my thinking. He was a cool guy; he listened to heavy metal music, he was a journalist, he adored Alfred Hitchcock…but most of all, he loved comic books. Within a few months, I devoured every film and music album he recommended to me. He brought back a love for comics I had so carelessly abandoned. I buried myself in piles of superhero comics and modern graphic novel masterpieces, including V for Vendetta by Alan Moore and Maus by Art Spiegelman. This teacher and I became very close, and I began to trust him enough to show him my artwork. I valued his opinion, and he encouraged me to continue creating comics.

For high school I switched schools, and decided that it was time for a change. I focused on subjects that I struggled with, like math and science. As time passed and my academic performance improved, my confidence grew. Opportunities to pursue other career paths began to look feasible. I saw three options: medicine, paleontology, or comic books. The first two fields have many high-paying jobs, and I felt that my parents would be happier if I entered those fields. However, those jobs couldn’t guarantee happiness; simply being good at the subjects didn’t mean I would enjoy these fields as a future career.

I was about to abandon the idea of becoming a comic book artist until I met a classmate who never gave up on her ambitions. Though our school didn’t care for, or help support her interest in photography, there was no stopping her passion. We became good friends, and slowly, I began to realize that art was the one thing that truly made me happy. Becoming a comic book artist would mean I would be living for myself, instead of for others. 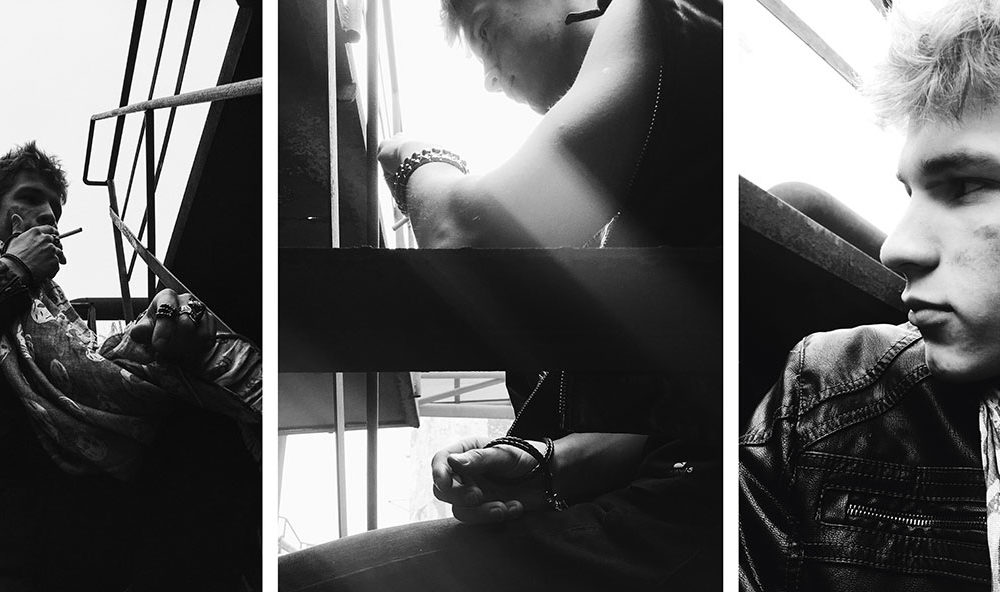 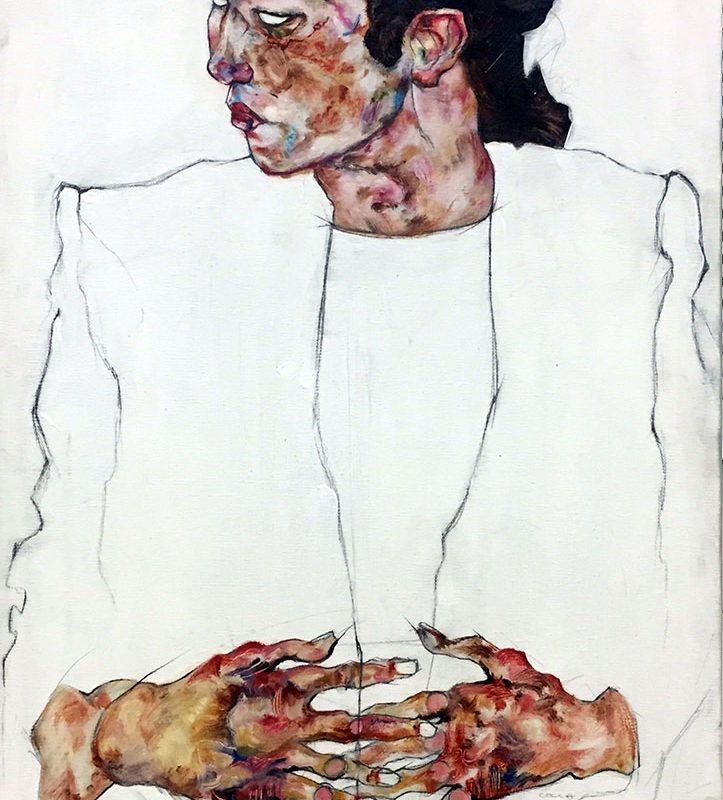 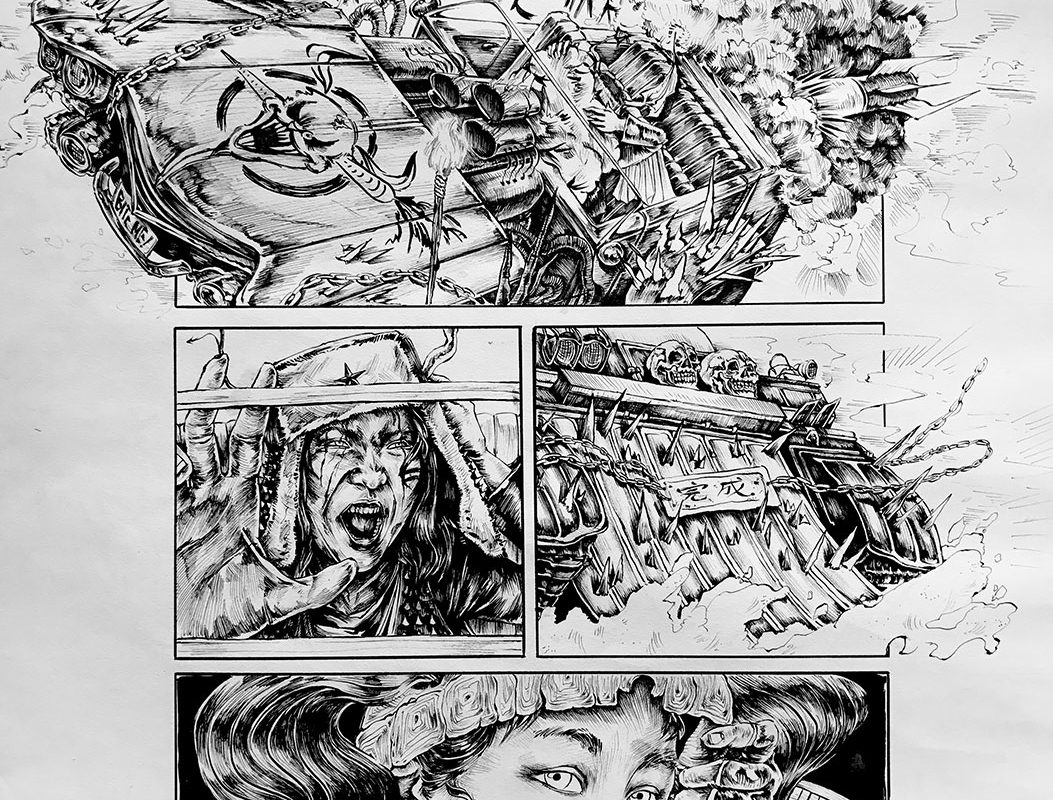 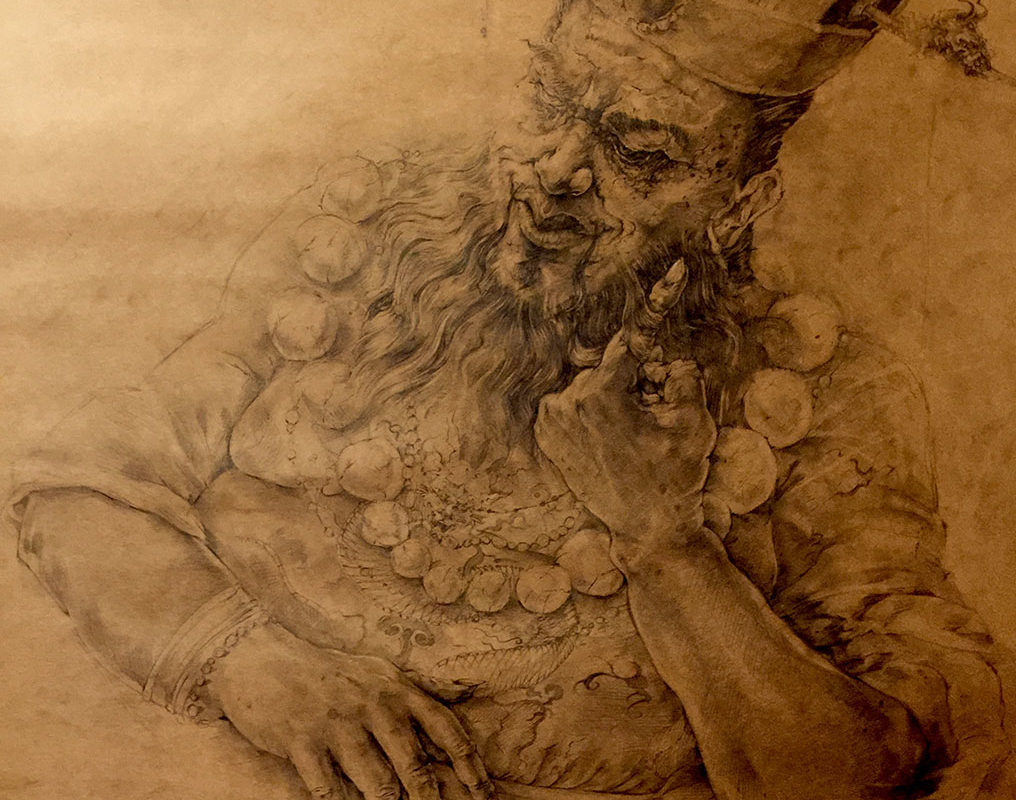 Realizing this goal was only the first step; it still frightened me to think what would happen if I actually told my parents. Would they yell at me for choosing this path? Would their only response be a dejected sigh? After a few days of dithering and doubting myself, I forced myself to profess my dream of becoming a comic book artist to my parents.

Instead of the expected hostility, I was faced with my parents’ eager encouragement. They believed that I could get into an art university, and always complimented my work. In my attempts to please my parents, I failed to see that those high expectations had been self-imposed. All this time, my parents just wanted me to be happy.

After graduating from high school, I took some time to reflect on the impact that art and comics had on my life. Art seeped into my life in elementary school, so that I could conjure the idea of becoming a comic book artist in the future. Even during the harder, more insecure years of middle school, my ambition still  managed to lurk around, never completely disappearing from my life. Finally, my passion for comics returned with greater prominence in high school to remind me that art and comics are the things that truly make me content with life.

If I’ve learned anything from my experience with art and comics, it’s that finding something you love doing, and having friends and family who support you, can bring the greatest kind of satisfaction in life.