How to Animate a Charcoal Drawing

“This project was very fun for me! I love animation, even though it is a very frustrating and time-consuming process. I enjoy playing with facial expressions and personality through characters, so for this project I took one of my original characters and did just that.

One problem I ran into was taking consistently placed photos of each step of the animation process. I tried to keep the photos more or less in the same place, however, in the end the animation did turn out choppier than I would have liked.

Despite this, I still enjoyed this project, and it was a fun challenge to animate through traditional media rather than digital.”

“Charcoal animation can be difficult, but you will be so proud of yourself once you push through the challenge. For me, I was a little hesitant creating an animation out of charcoal since I was used to using a computer program.
After creating a small film with this medium, it has easily become one of my favorite ways of animating. The charcoal also gives so many more textures than what a computer program could do. Charcoal can look gritty, soft, or even cloudy during your animation process, which looks far better than what brushes on an animation program could offer.
After a while of animating with charcoal, you just get stuck in a rhythm and sometimes you’re having so much fun you don’t want to stop. It is very intricate, but every detail is so worth it at the end.”

“Before I started this project, I had just finished an intense digital animation, and so I was eager to return to physical materials like the charcoal in this animation technique. This project was also a good opportunity to hone my abilities in observational drawing and frame composition.

My subject matter was something very ordinary. While scrounging around for ideas, I noticed this small, ornate mirror that sat on my desk. I would use it to put on makeup, lotion…one thing or another. But its primary purpose was for making stupid faces when working drained me out. I decided to capture this quirk in the animation, and it was fun drawing my strange expressions.

At the end, I wished that the animation was a little longer, and that I had used some kind of paper that was more durable. As so many of my charcoal drawings were done on newsprint, it became a force of habit to do everything charcoal-related on it. Not only is it cheap, but rougher newsprint grips the charcoal dust effectively.

The only problem was its durability; after several erasures, the paper had gotten frail, with fibers jutting from the surface. That made it increasingly difficult to work on, and I pushed it as much as the medium could handle.” 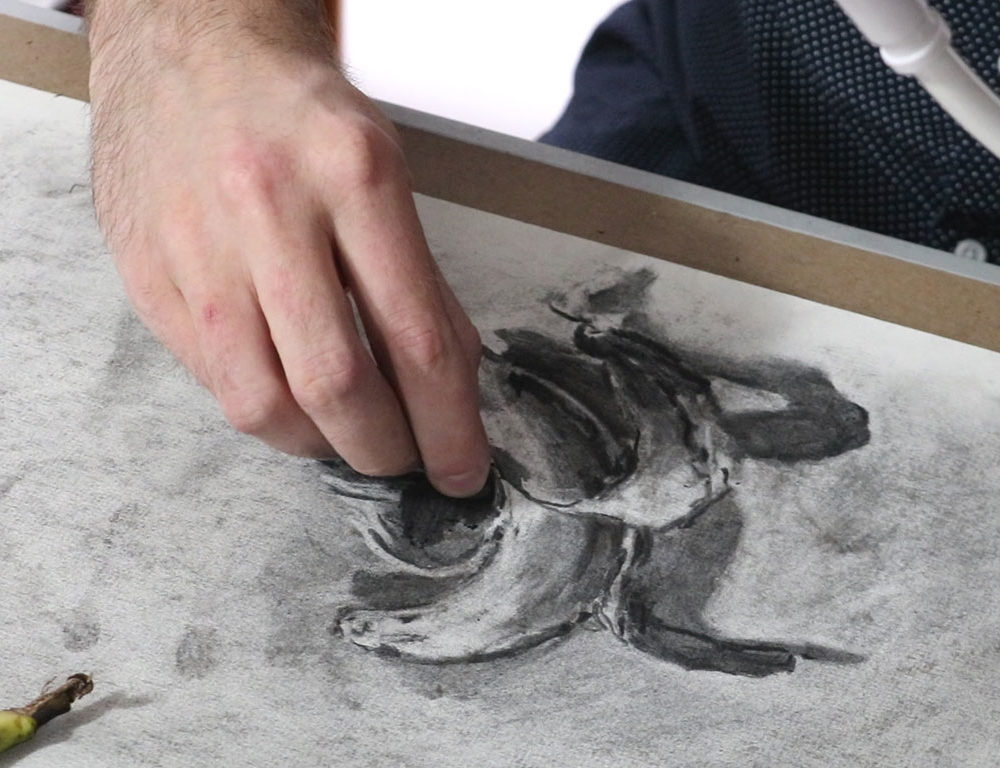 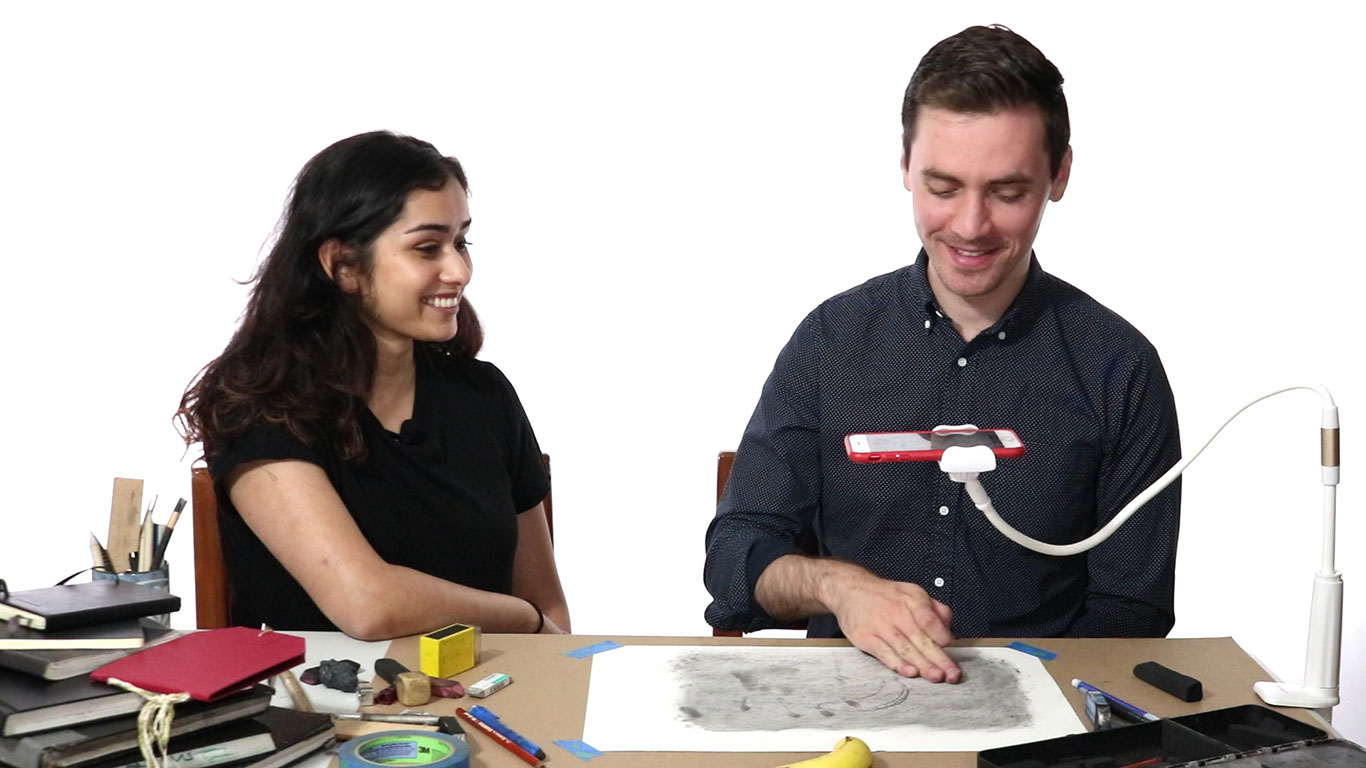 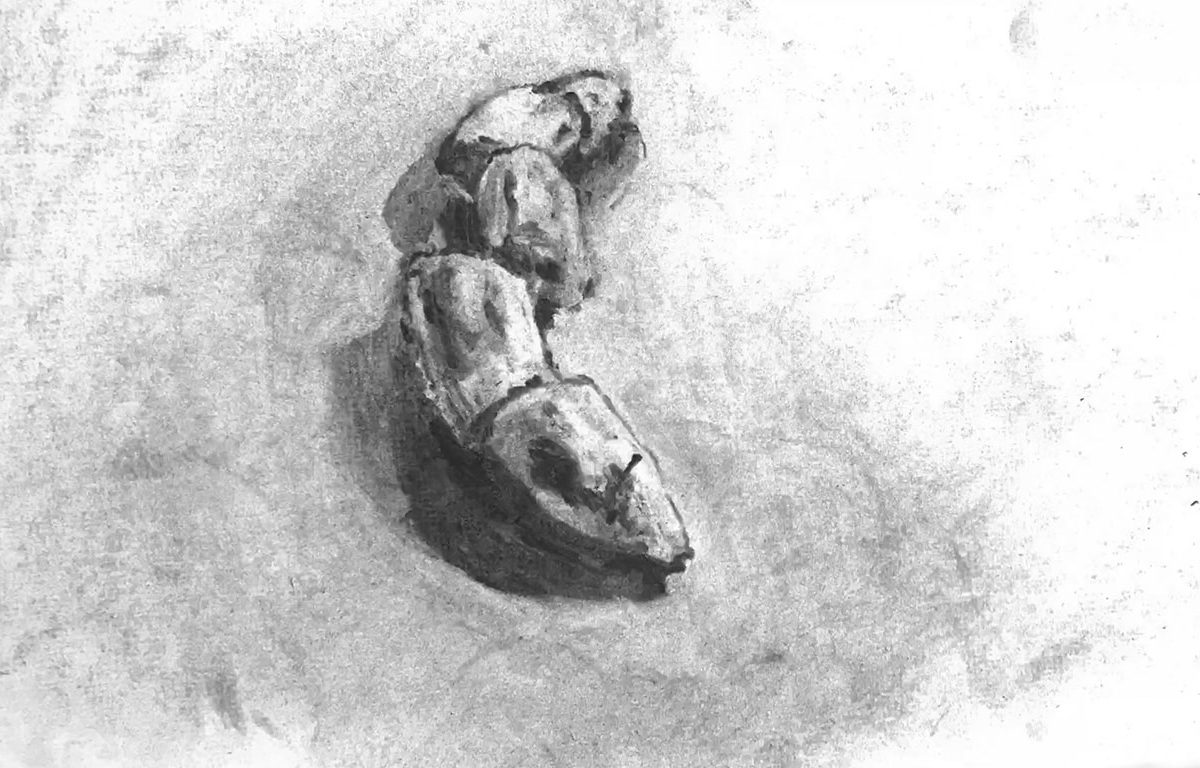 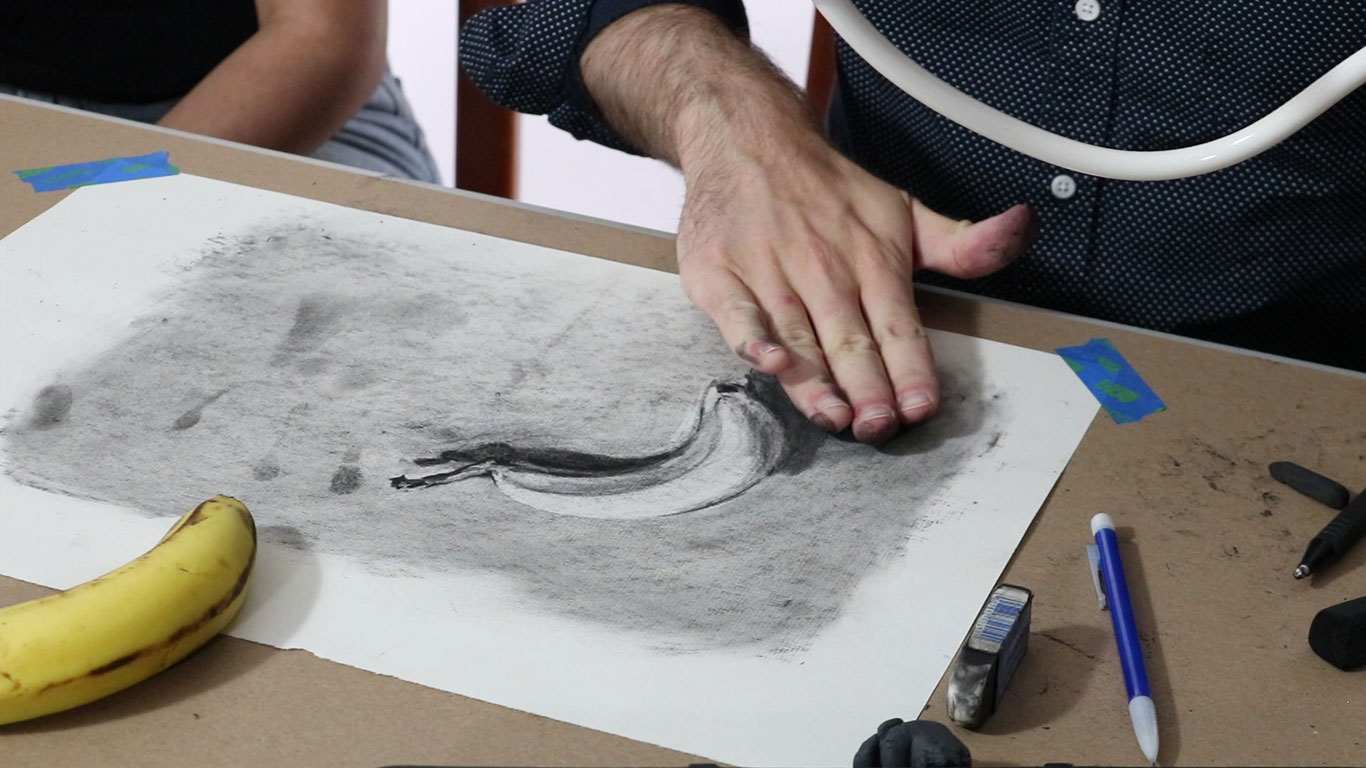 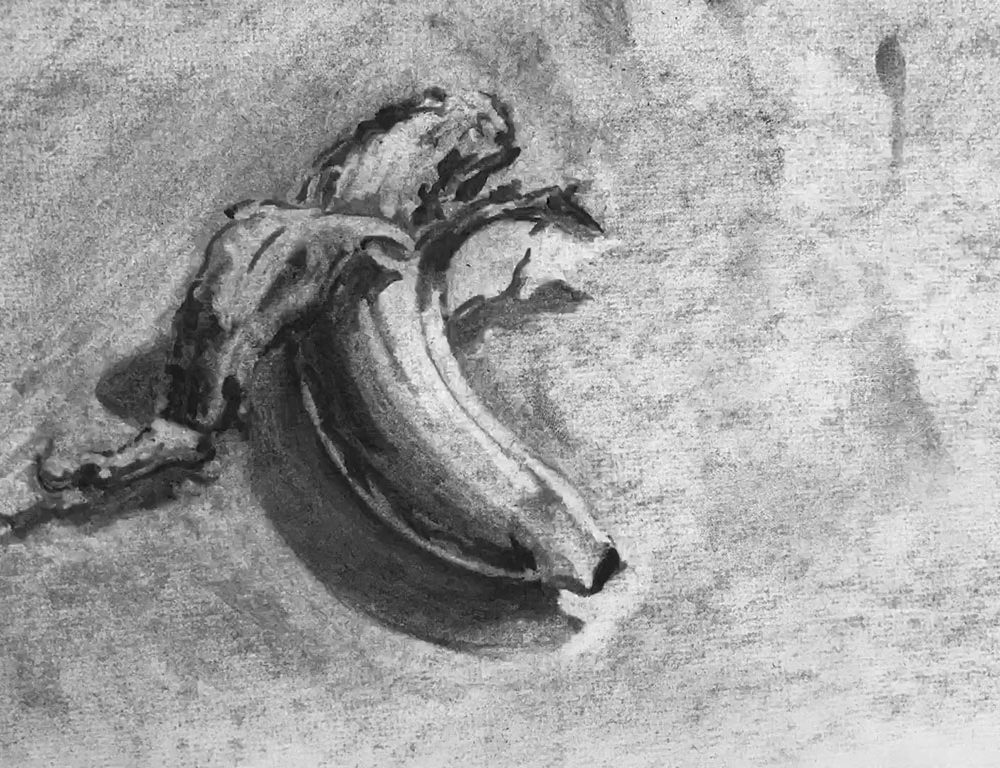 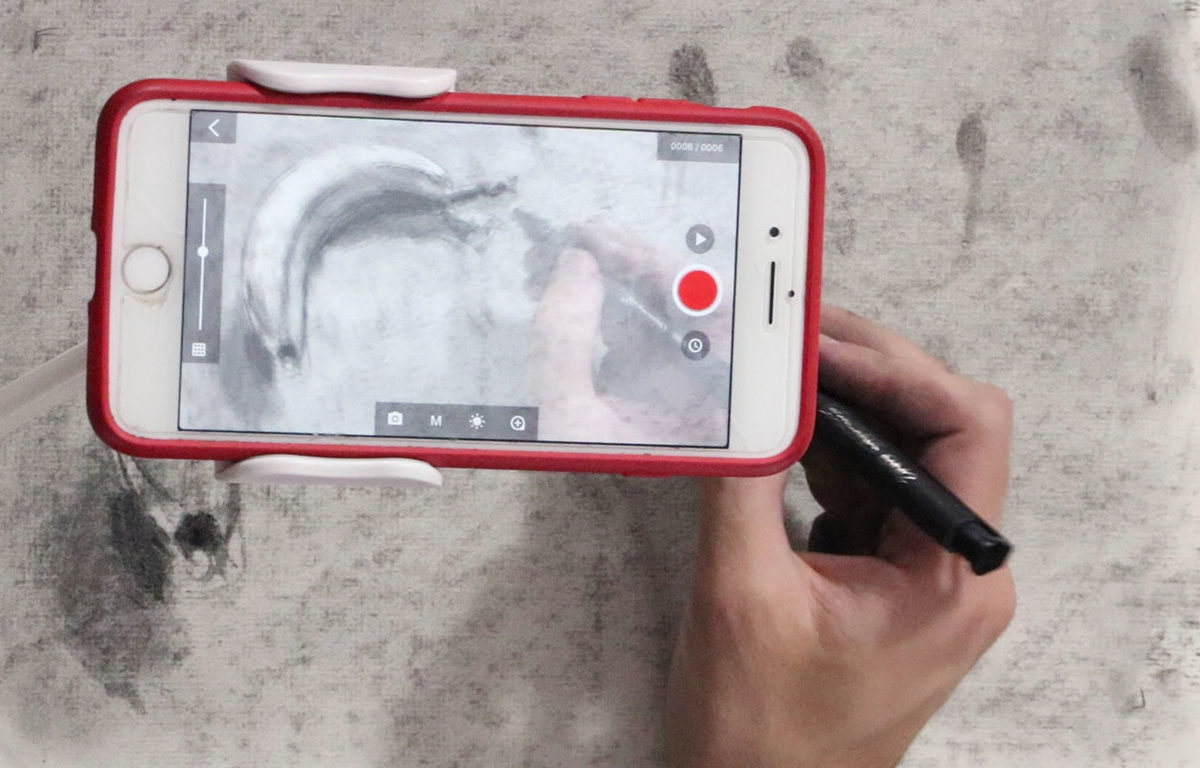 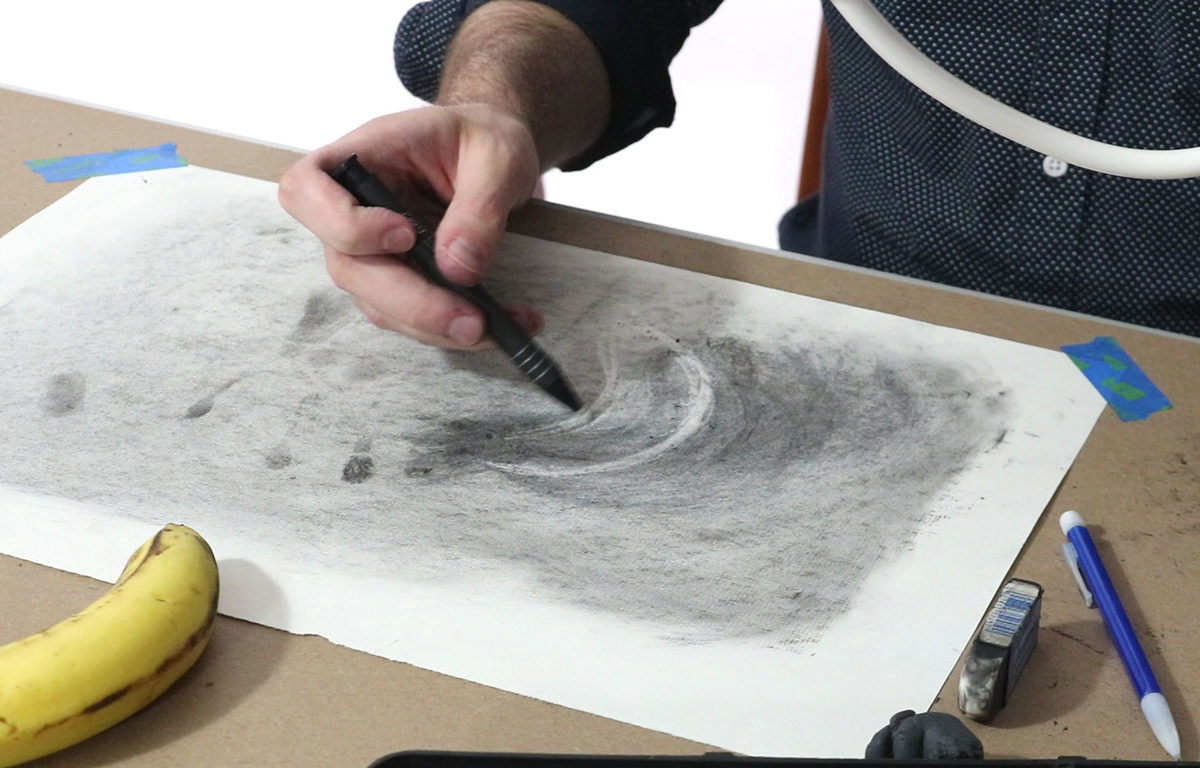 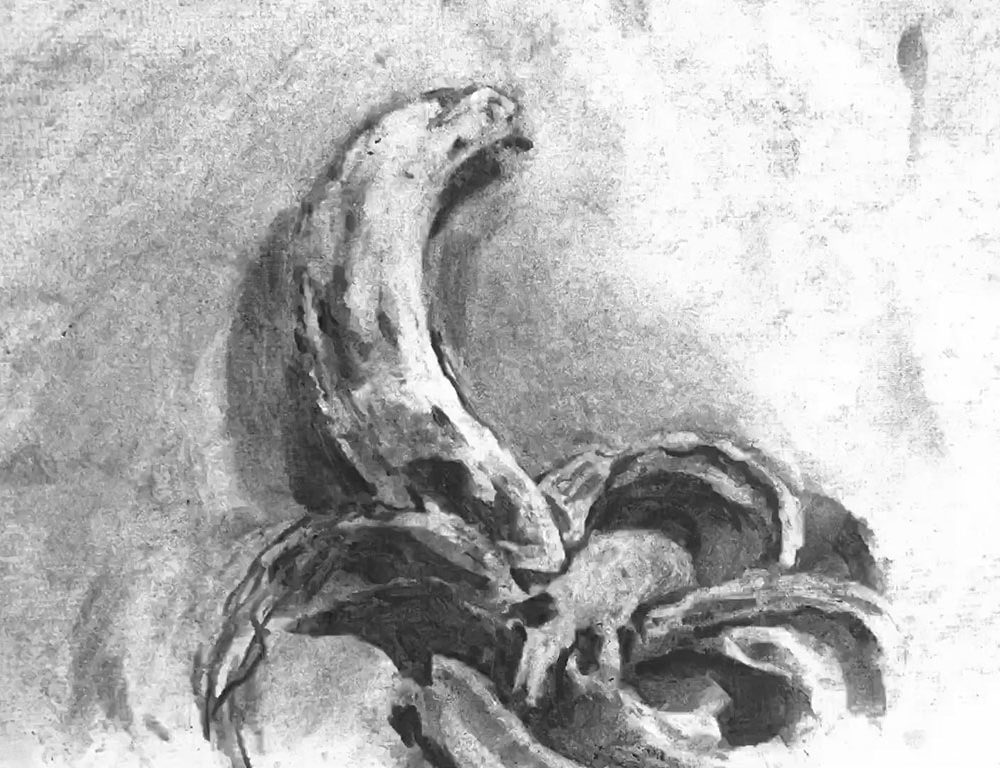 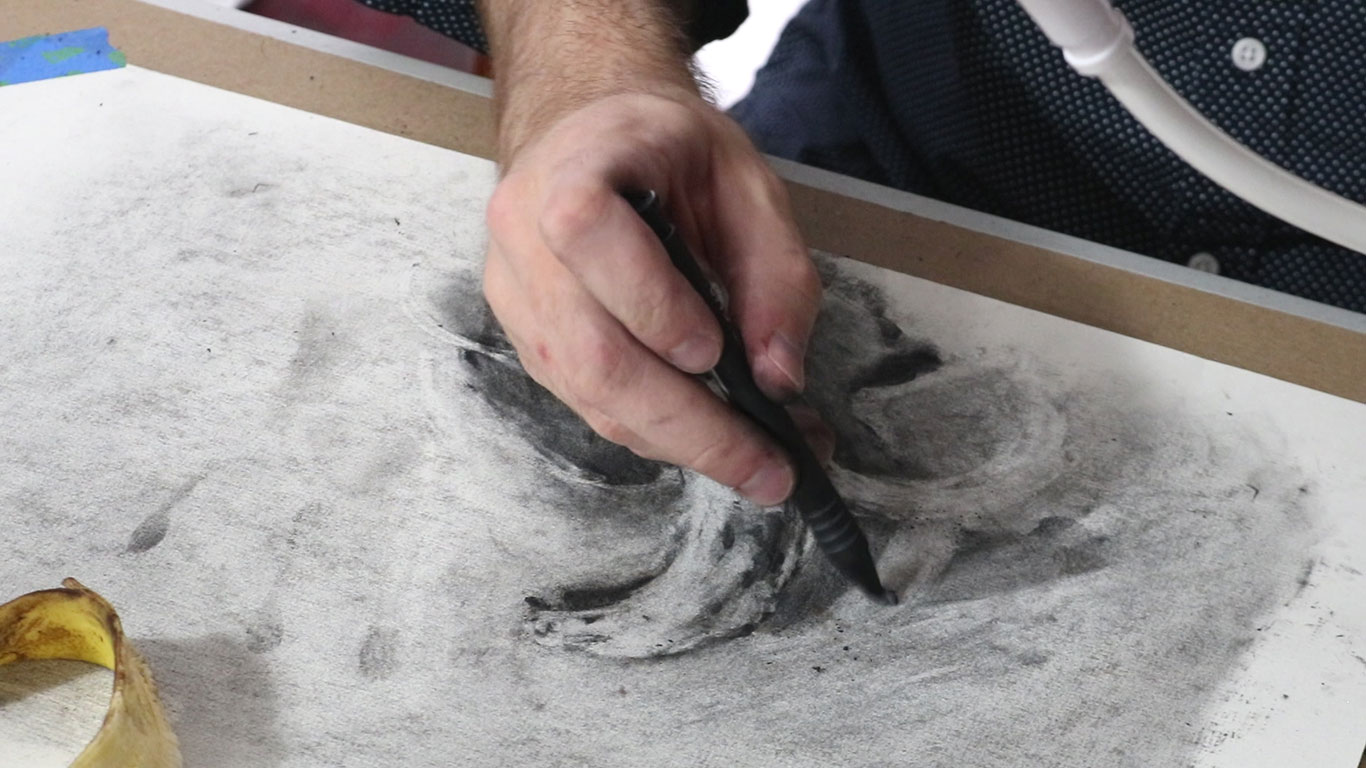 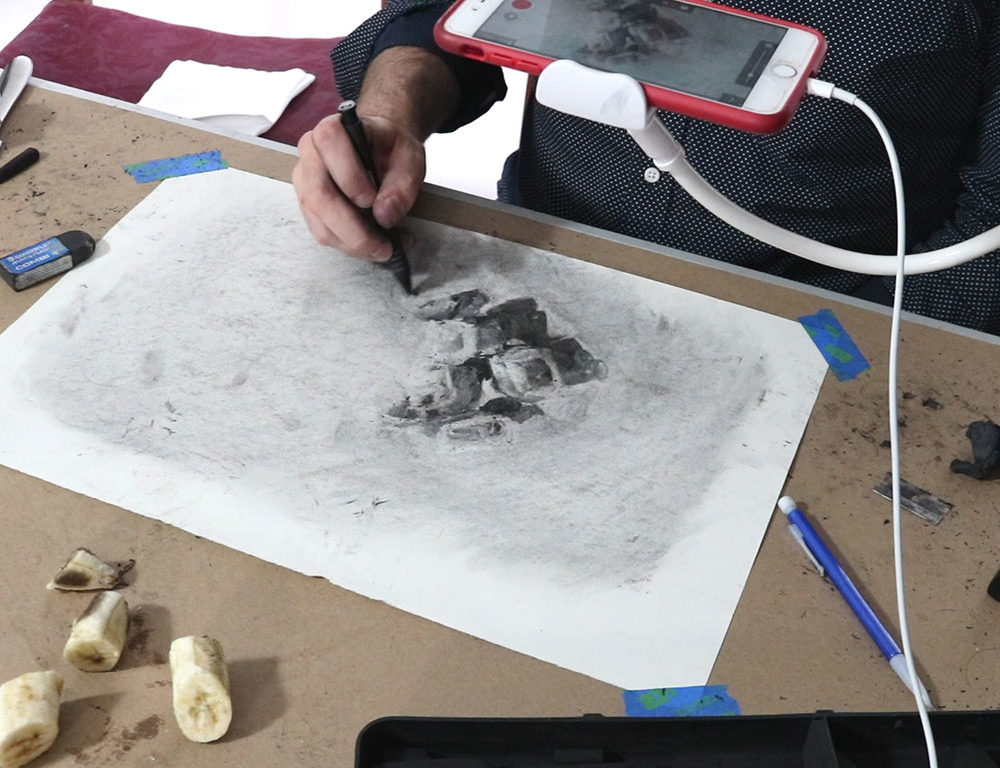 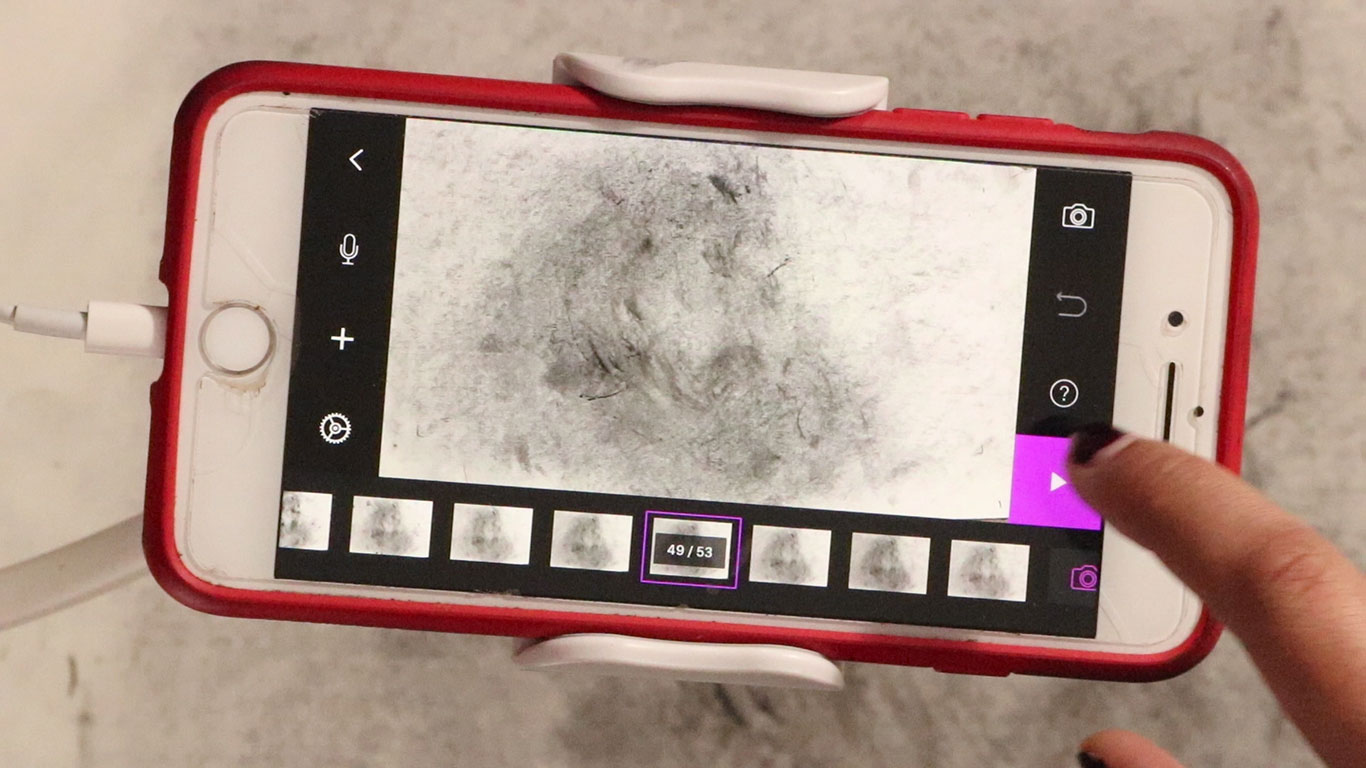 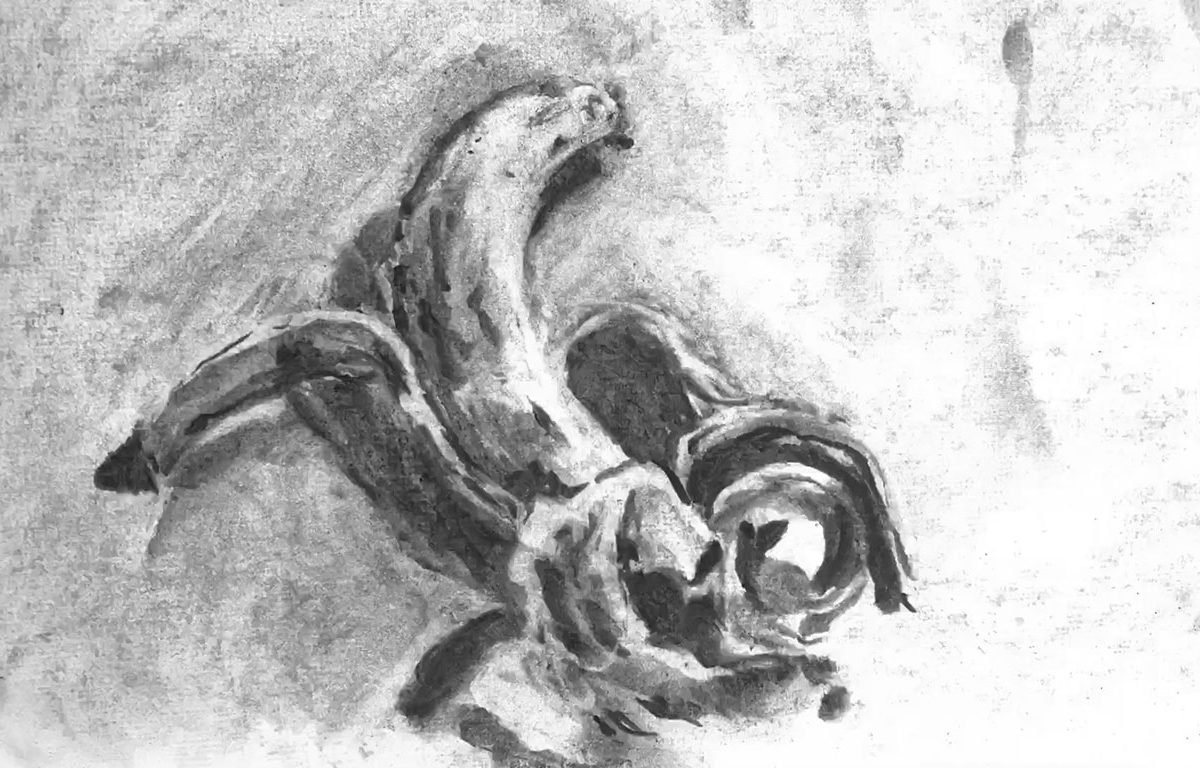 Deepti: “So Casey I know that you have some interest in learning how to animate and you have a lot of experience with charcoal.  I think this process of creating a moving charcoal drawing is a great way of like bridging that gap between a still 2D image, and then creating a moving animation, and finding to connect those two.”

Casey: “Animation has always definitely been an interest of mine, I remember when I was a kid, I always fantasized that that was what I would do for a living. It’s something that I don’t really have any real experience with.”

Deepti: “Totally, and I think this is a really great exercise for that, because it focuses less on the drawing or the final product and more, it’s more about just like figuring out to transition from a) the drawing to b) the like, moving image.”

Casey: “I have this idea in my head of animation as being something I need a real elaborate setup for, or animation programs on a computer. Starting with charcoal, which is something I have a lot of experience in, I’m definitely comfortable with it and so I think this is a great place to start.”

Deepti: “When you’re trying something new, it’s always great to start with something you already know and then tackling a on a new skill. So for you, you’re really good with charcoal, and then we’re adding on this moving element to it.

I think another benefit to this process of learning animation is that you really don’t need that much. What you would add onto just doing a traditional charcoal drawing, is just the use of a smartphone or a way to capture each frame. The gratification of seeing your film is really instant. You have the phone, you take the images and then kind of immediately the film that you made.”

Casey: “Yeah, the instant gratification thing is appealing because when you learning anything new it’s really scary. And so you have like, validation immediately to know you’re on the right track, that’s awesome.”

Deepti: “And also I think when I talk about animation, a lot of people immediately think digital, because so much of the animation you see in mainstream media is digital animation. It’s really good to always start working with your hands, and being really tactile and being really 2D, and then moving onto computer or digital.

This is really good way of just training your body to understand animation. And then later on if you wanna incorporate any sort of like digital tools, or computer technology I think that’s a good way moving on. So just like doing a normal charcoal drawing, I think it’s really great to use a reference for this animation, and especially using a reference that can give a lot of movement or manipulation.

Like for example, a mug wouldn’t be a great reference to do the animation based on, because all you could really do is like rotate but you can’t manipulate it that much, like for example a flower which you could rip petals off. The point of an animation is that you’re showing some sort of progression, so you want a reference that you can manipulate in a way so that there is a progression happening throughout the film.”

Casey: “So when you said manipultable object the first thing I thought of was a banana, you can peel it. I think that’s a nice kind of tactile motion to animate. As a cartoonist, the banana has this kind of excellent comedic appeal. It’s the perfect comic prop.”

For the tripod arm, I have this S curve going over here, and the reason for that is because what I want with the iphone is to be able to see the screen so that I’m not like, sticking my head underneath every time.”

Casey: “Because it’s something that we’re going to be drawing and redrawing, it’d be best to stick with vine charcoal, rather than moving it to compressed charcoal. It’s easily erasable, it’s light, and I like it because it kind of sits on the charcoal paper and you can move it around which will be great for this animation.